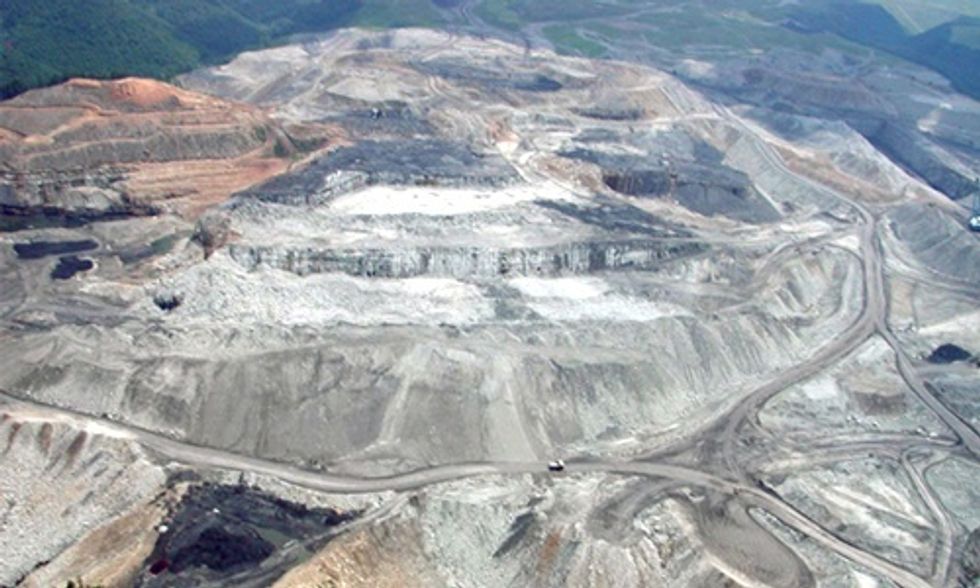 "The more health research we conduct on mountaintop removal the more truth we discover. We have already discovered enough truth that any reasonable thinking person understands we must take urgent action to stop any further MTR until it is proven that MTR is not a public health threat," said Bo Webb, who lives under a mining operation and co-founded the Appalachian Community Health Emergency Campaign.

With the Appalachian coal industry in a tailspin and the global banking community pulling out of mountaintop removal financing, the extraordinary show of support for the ACHE Act campaign effectively acknowledges that the only defenders of the cancer-linked radical strip mining operations are a handful of absentee coal companies, indicted coal baron Don Blankenship, and their fringe supporters in Congress.

A New Appalachia is Rising

Fed up with the stranglehold of mountaintop removal mining blocking any economic future, residents are pushing a regeneration plan for a diversified economy, and calling for Abandoned Mine Land funds and investment from President Obama's Power Plan to counter the irreversible health and environmental damage from strip mining.

"The more health research we conduct on mountaintop removal the more truth we discover. We have already discovered enough truth that any reasonable thinking person understands we must take urgent action to stop any further MTR until it is proven that MTR is not a public health threat," said Bo Webb, who lives under a mining operation and co-founded the Appalachian Community Health Emergency Campaign. "Any politician, person, agency or organization that refuses to act quickly to protect our children from further exposure to mountaintop removal's toxic fallout is not serving The People well," Webb added.

The appeal to Congress on the basis of deadly and massive health costs sidesteps the Obama administration's flawed regulatory approach, which has hedged on any further crack down on the devastating mining process despite years of evidence and two dozen peer-reviewed health studies on the impacts of the extreme mining process.

The historic petitions, in fact, were delivered within days of the anniversary of the Surface Mining Control and Reclamation Act, which granted federal sanctioning to mountaintop removal mining in 1977 over objections by President Jimmy Carter.

Keep that date in mind: How do you ask a plundered coal mining community to be the last community to die for a mistake?

Despite recent news headlines that mountaintop removal mining has dropped more than 60 percent since 2008, according to an EIS assessment, residents living in strip mining areas in central Appalachia were quick to remind the news media that destructive mine blasting and its toxic fallout continued to flourish in close proximity to houses, schools and farms, even though they had not been registered as mountaintop removal operations.

"While some companies may claim that they no longer conduct mountaintop removal, the blasting methods and health consequences are the same regardless of what they call it," said Bob Kincaid, president of Coal River Mountain Watch. "Tonnage may be down in some places, but companies such as Alpha Natural Resources are still blasting above our communities and seeking new permits. Given the host of diseases associated with it among an innocent population, we can live without it far easier than with it."

Last week, in fact, on the same day the EIS assessment appeared, Coal River Mountain residents in West Virginia testified in opposition to a new 847-acre Alpha Natural Resources strip mine in their area.

"Mountaintop removal coal mining is a crime against Appalachia," said Josh Nelson, communications director with CREDO Action. "That's why grassroots activists around the country are demanding that Congress pass the Appalachian Community Health Emergency Act and put an end to this deadly and unnecessary practice."

"The coal industry is destroying Appalachia, detonating millions of pounds of diesel fuel and explosives daily to rip the top off of mountains for coal," said Marty Hayden, Earthjustice vice president of policy and legislation. "More than 22 peer-reviewed scientific studies have found that cancer, disease, and birth defect rates are significantly higher in these areas. It's high time for Congress to pass the Appalachian Community Health Emergency Act, which would place an immediate moratorium on new mountaintop removal mining permits."