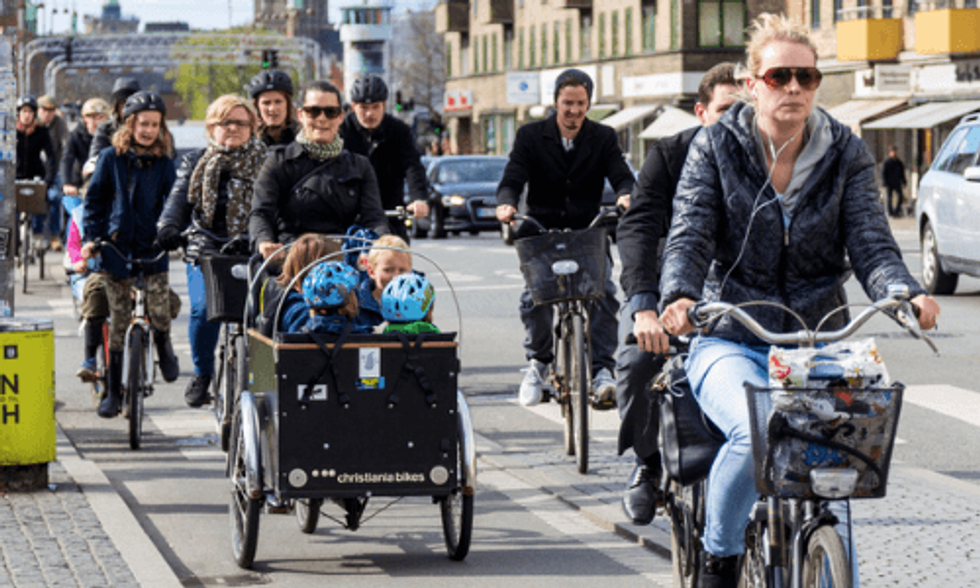 We all know that bicycling is green and healthy, but some cities just make it easier for you to ride a two—or three—wheeler. That's why urban design consultancy firm Copenhagenize has released its annual index of the best cities in the world for cyclists, with Copenhagen topping this year's list after coming in second for the past two years. Notably, only one U.S. city cracked the top 20, with 18th-ranked Minneapolis.

With modal share for bicycles shooting up from 36 percent to 45 percent from 2012 to 2014, this world-famous bike city is back on the top spot on the list after finishing second in the last couple of years.
Photo Credit: William Perugini / Shutterstock.com

To come up with the list, 122 cities around the planet were ranked based on 13 pieces of criteria including: advocacy; bicycle culture; bicycle facilities (such as bike racks, ramps on stairs, space allocated on trains and buses); bicycle infrastructure (or designated lanes); bike share programs; gender split (ideally 50-50 men and women); modal share for bicycles; modal share increase since 2006 (the year that urban cycling started to kick off); perception of safety (which involves helmet-wearing rates); the political climate regarding urban cycling; social acceptance (as in how drivers and the community at large regard urban cyclists); urban planning; and traffic calming (lowering speed limits, for instance).

The top 20 bike-friendly cities of 2015 are listed below, with last year's ranking in brackets.

It's clear that if you want to go on a bike tour somewhere, you'll probably want to consider Europe. Bike-loving Europeans dominated the top 20, with only Buenos Aires representing South America, and Minneapolis and Montreal stumping for North America. According to Outside Online, Portland, San Francisco and New York City have appeared in the top 20 in previous iterations. Asian bike-centric cities such as Tokyo and Nagoya, which have appeared in the top 20 before, have fallen off this year's list.

A big reason why Copenhagen was given the crown this year is due to its impressive jump in number of bikers. From 2012 and 2014, the number of people commuting by bike increased from 36 percent to 45 percent, whereas commuting by car dropped from 27 percent to 23 percent.

"The Danish capital remains impressively consistent in its investment in cycling as transport and in making efforts to push it to the next level," the report's authors wrote.

The election of urban cycling-advocate Morten Kabell as the mayor of the Technical & Environmental Administration in Copenhagen's Department of Transportation as well as the city's investment in biking infrastructure (including several new bridges and an elevated bike ramp) has helped increase cycling numbers as well. This is all on top of protected bike lanes, cycling super highways and an ingrained cycling culture. Simply, it's just easier and faster to bike to work or school because the city is built that way.

Intriguingly, the bike-mad city is also attempting to use bicycle travel times as the baseline for all traffic lights and flow projections, instead of car travel times, the authors noted.

The one major criticism the authors had of Copenhagen's bike system is its "failed" bike share program. "It's getting embarrassing," they wrote. "Put the money into something that actually works." (Full disclosure: I rode one a year ago and found these hefty electric bikes slow and cumbersome, making it difficult to keep up with Danish pedalers).

The authors of the report pointed out that Minneapolis made its inaugural appearance on the index due to its 189 kilometers of "on-street bikeways" and 147 kilometers of off-street roads. Its "respectable" bike share system was also given kudos (I also rode one of these before and loved it). However, the report recognized that its chilly winters are a big road block and city planners should prioritize snow clearance on the bike infrastructure "above all else."

"What will help the city, however, is to stop talking about the winter and to focus on getting a massive rise in ridership during the rest of the year," the authors added.

Even with its harsh winters, when it comes to biking, where there's a will there's a way. Check out the clever photo below from Nice Ride Minnesota, the Twin Cities' nonprofit bike share program.

We've had a fun break, now we're back at it to bring you an even better bike share for 2015! How was your holiday? pic.twitter.com/SxhgqTCSty