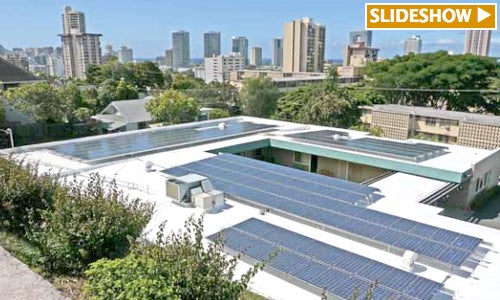 Environment America scanned the nation to find out which cities are shining the brightest when it comes to solar energy.

Those cities are doing more than just leading the way—the top 20 cities contain more solar power today than the entire country had just six years ago.

Not surprisingly, you’ll see plenty of California cities in the top 20 featured in Environment America’s report, Shining Cities At the Forefront of America’s Solar Energy Revolution, released this week in several variations by the organization’s various state arms around the country.

The report also includes listings of cities split into categories that extend from “beginners” to “stars.” It should be no surprise that states with politicians that tried passing anti-renewable legislation don’t contain cities that would even qualify as “beginners.” The fact that states like California have federal and state politicians willing to stand behind solar energy certainly aids in its deployment.

“Solar energy is renewable and clean, which is why I’m such an advocate for its role in our national energy portfolio,” U.S. Rep. Scott Peters, D-CA, said. “The solar industry is creating jobs, including more than 675 in my district alone and powering our economy toward a more sustainable future. I’m proud that San Diego and California are leading the way as an example for the rest of the country.”

Some cities, like New York, were pleased with their standing, but look forward to doing more.

“New York City is home to a wealth of industries and it is crucial that it continues to lead the way to nurture and build the solar industry,” said David Sandbank, vice president of New York Solar Energy Industries Association. “With the support of our state and local government officials and the creation of the NY Sun-Initiative, we are well on our way to achieving this goal.

“It is very important that we continue our momentum and create more solar jobs while reducing our carbon footprint and dependence on traditional electrical power.”

In Ohio, where legislation to freeze renewable energy standards indefinitely is on the table, some desperately want to deploy more clean energy. Cleveland and Columbus were considered “beginners” by Environment America, while Cincinnati is considered a “builder,” ranking 24th in the nation.

“We’ve made progress here in Columbus, but we’ve just begun,” said Ragan Davis of Environment Ohio. “By committing to bold goals and putting strong policies in place, we can make Columbus shine as a national leader and reap the environmental and economic benefits of the solar revolution.”