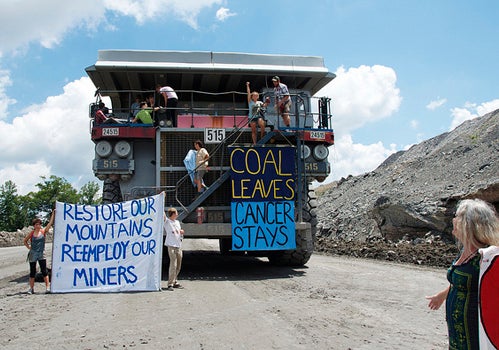 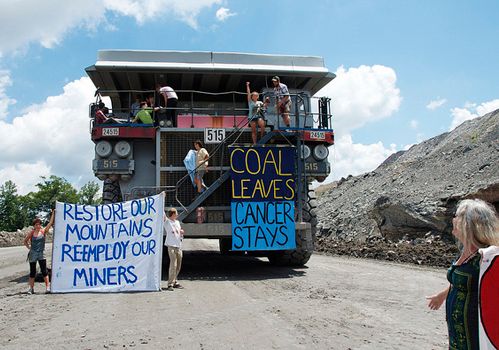 Bail is set for $25,000 each at the Western Regional Jail. Multiple arrestees, including 20-year-old Dustin Steele of Matewan, W.V., were reportedly beaten by authorities while in custody.

The action stopped mining work for three hours and accounts for the largest number of people ever to disrupt an active mountaintop removal site.

After protesters walked onto the Hobet 45 mining complex, several protesters locked themselves to a rock truck with banners reading: “RESTORE OUR MOUNTAINS RE-EMPLOY OUR MINERS” and “COAL LEAVES CANCER STAYS.” 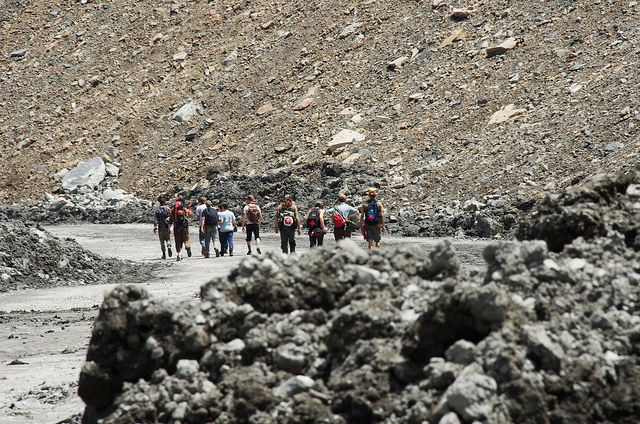 The remainder of the demonstrators walked off the site when asked to leave by police. Authorities prevented their transport vehicles from driving down the public road to pick them up, forcing them to walk for four hours along the side of Mud River Road while allowing pro-coal demonstrators to harass them. After reuniting with their transport vehicles, they were barricaded on the road for an hour and a half by a blockade of miners in pickup trucks. A separate convoy of vehicles attempting to pick up demonstrators was blocked in by pro-coal demonstrators at a gas station where three individuals were pepper-sprayed.

Pro-coal demonstrators were not stopped by police in their multiple attempts to block public roads. 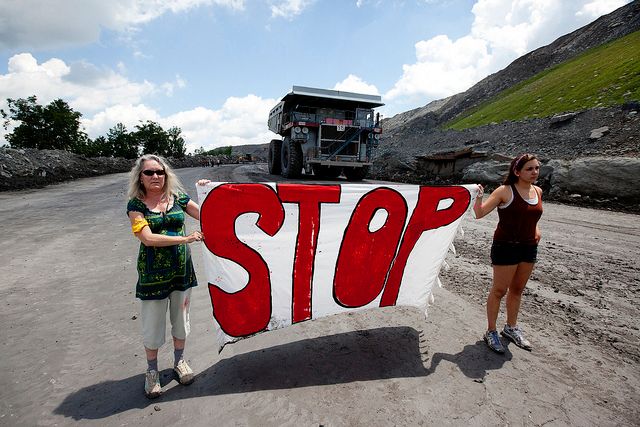 “The blatant cooperation between law enforcement and the coal industry makes me embarrassed as a West Virginian,” said Junior Walk of Whitesville, W.V. “This brutality and disregard for safety is one of the clearest examples of the hold the coal industry has on the state government.”

Earlier in the day, about 30 people gathered at the Kanawha State Forest with the intention of later joining the protest at Hobet. They were met by about 60 counter-protesters, but the tone turned non-confrontational as one miner struck up a lengthy dialogue with a local protester over the economic future of the region.

Police arrested one activist who they accused of lying to them about not having identification, even though the only identification on him was a debit card—not a valid form of ID. After several hours, he was released with a ticket on the side of Rt. 94, far from any town and forced to hitchhike because police had confiscated his cell phone and debit card. An independent journalist was also arrested for photographing the incident.

“The government has aided and abetted the coal industry in evading environmental and mine safety regulations,” said Steele. “We are here today to demand that the government and coal industry end strip mining, repay their debt to Appalachia and secure a just transition for this region.”

Mountaintop removal is a crime against humanity that has left a legacy of poisoned air and water, high cancer rates, economic exploitation and devastated communities and ecosystems throughout Appalachia. Corrupted legislators and regulators at the state and federal levels have failed to take action to stop these atrocities, leaving direct action as the last resort for conscientious residents aiming to save the land and people of Appalachia.

For more information and updates on the arrests, click here.