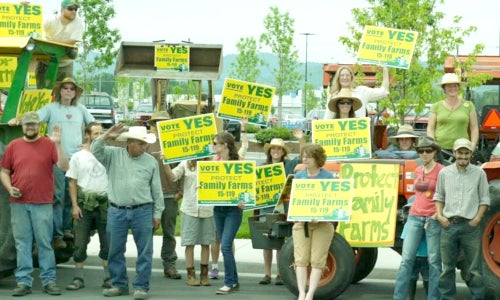 Southern Oregon family farmers and their neighbors took matters into their own hands Tuesday, voting to ban the planting of genetically engineered crops.

Voters in both Jackson and Josephine counties approved bans, and neither was close. Jackson voters approved the ban, 66 to 34 percent, while Josephine voters passed their ban by a 58-to-42-percent count. 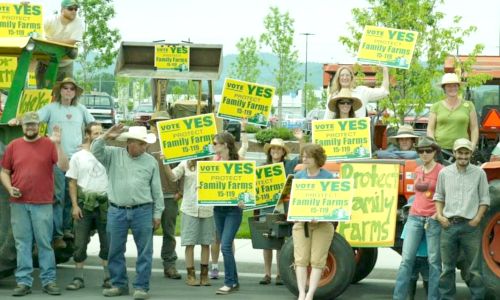 “Tonight, family farmers stood up for our basic right to farm without having our crops contaminated by Monsanto and the other chemical giants that own the patents on genetically engineered crops,” Elise Higley, campaign director for Our Family Farms Coalition and owner of a 100-acre farm in Jackson County, said after results came in.

“The federal government and state government have twiddled their thumbs as Monsanto and the other chemical giants have been allowed to sell a product that spreads onto family farms and can contaminate the seeds we depend on for next year’s crop.”

About 150 family farms came together under Our Family Farms Coalition to galvanize the community. Meanwhile, Monsanto, Syngenta, Dow and other chemical companies collectively spent nearly $1 million in to air ads that attacked the ballot measure.

That was record spending in Jackson County, where primetime TV ads can cost just $50, according to Food Democracy Now! Opposers’ campaign was based on the falsehood that only organic farmers would be affected by GE pollen contamination. In reality, if a farmer’s crop is contaminated with GE pollen, any seed produced is considered legally patented by the chemical corporations that are the largest patent holders of these crops. An example is Mosanto, whose top selling herbicide was recently linked to kidney disease in Sri Lanka.

“The dispute has never been over organic certification, but instead it’s about the right of any farmer to save their seed for their next year’s crop or sell it commercially,” said Chris Hardy, one of the farmers who proposed the measure.

The victory comes as advocates from Oregon Right to Know are starting to gather signatures for a state ballot measure that would require GE food labeling.

“[Tuesday’s] victory is another sign of the growing power of the food movement’s ability to organize effectively against the world’s largest chemical and seed companies with little or no resources,” said Dave Murphy, founder and executive director of Food Democracy Now!

“America’s farmers and citizens are uniting across the country to build a better food system, protect our nation’s farmers and stand up for our right to know what’s in our food. The good news is, we’re just getting started.”

Millions to ‘March Against Monsanto’ on May 24