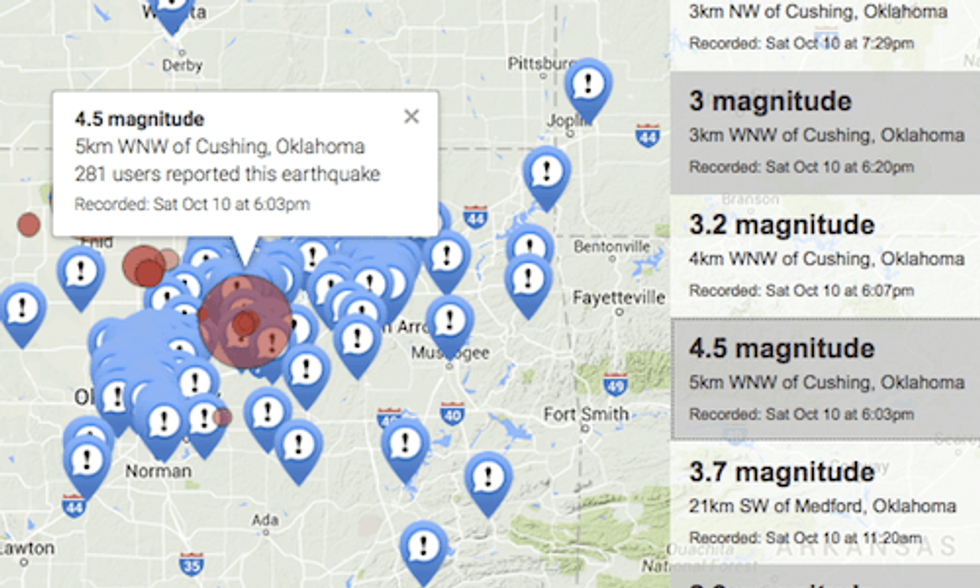 Two earthquakes registering at a 4.5 and a 4.4 magnitude shook frack-happy Oklahoma on Saturday, some of the strongest felt in the state this year. The stronger quake occurred just a few miles from the city of Cushing, which holds one of the largest crude oil storage facilities in the world.

The recent quakes struck only a handful of weeks after the Oklahoma Corporation Commission (OCC), the state’s public utilities commission, shut down several disposal wells around Cushing and issued new regulations meant to prevent more earthquakes in the area, according to Al Jazeera.

This map shows earthquakes with 2.5+ magnitudes within a 400-mile radius of Oklahoma City. On Saturday, a 4.5 quake hit the city of Cushing, a major crude oil storage hub.
Photo credit: NewsOK

A local report said that the stronger 4.5 magnitude quake occurred around 5 p.m. Saturday evening and could be felt in the nearby cities of Stillwater, Guthrie, Sapulpa, Oklahoma City and other parts of the metro. There were multiple aftershocks in Cushing, recorded at 3.0, 3.2, 3.1, 2.8, 2.7 and 2.5.

Bob Noltensmeyer, Cushing Emergency Manager, told the Associated Press he had not received reports of significant damage in the area although there were "shattered nerves."

"This one was pretty strong," he added. "The whole house shook."

A 4.4 was also recorded on Saturday at 4:20 a.m. about 18 miles southwest of Medford and about 100 miles northwest of Cushing.

America's heartland used to register earthquakes from two a year to almost two a day. This year, roughly 700 earthquakes of magnitude 3 or higher has shook the state, compared to 20 throughout 2009, as the Associated Press pointed out.

The Sooner State's seemingly never-ending earthquakes appear to be a man-made side effect of the country's drilling boom. Scientists say that the injection of wastewater byproducts into deep underground disposal wells from fracking operations are very likely triggering the major increase of seismic activity in Oklahoma, which is not near any major fault lines.

“What’s at risk is that when you put water into the ground, it’s never going to come back out. You’re putting it in places it has never been before,” George Choy, a seismologist at the U.S. Geological Survey (USGS), told the AFP about the spate of recent tremors.

As Al Jazeera reported, the OCC previously required disposal well operators to show that water is not being injected below the state's deepest rock formation, which is believed to contribute to the tremors. The commission issued rules on Aug. 4 to 12 operators of 23 wells that said they had 60 days to reduce the amount of saltwater being injected into wells. Incidentally, Oklahoma has about 4,500 disposal wells with about 3,500 in operation, so these regulations only applied to a small fraction of the wells.

The energy industry is, in a word, everything for Oklahoma. The state is one of the top natural gas-producing states in the nation. One-quarter of all jobs are either directly or indirectly tied to the energy industry.

However, as the state continues to rattle almost daily, even pro-business Oklahoma Gov. Fallin changed her tune about the link between fracking and earthquakes for the first time at the state Capitol last month, admitting a "direct correlation between the increase of earthquakes that we’ve seen in Oklahoma [and] disposal wells.”

Still, Fallin said earlier this month (via NewsOK) that she is still weighing some of the pros and cons of fracking in her state.

“We want to do it wisely without harming the economic activity we certainly enjoy and the revenue, quite frankly, we certainly enjoy,” Fallin said. “The council has worked very hard to ensure the energy sector, state agencies, environmentalists and academia are all talking and sharing that data and we have a scientific-based approach to reducing seismicity in our state.”