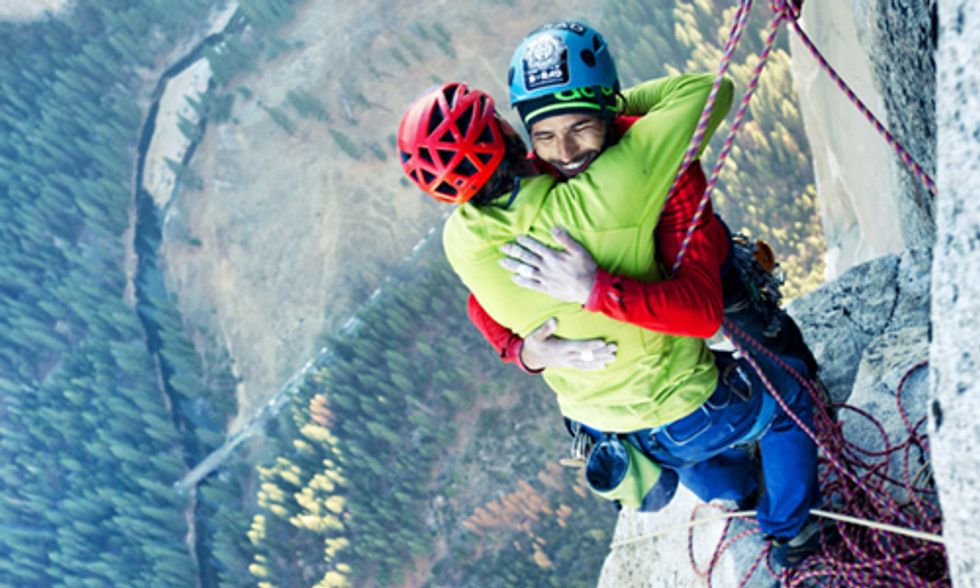 Yesterday a pair of Americans completed what had long been considered the world’s most difficult rock climb. Tommy Caldwell, 36, and Kevin Jorgeson, 30, became the first to “free-climb” the rock formation’s Dawn Wall in Yosemite National Park.

They used only their hands and feet to scale the half-mile section, 3,000-foot vertical wall on El Capitan. Ropes and safety harnesses were used to catch them in case of a fall, but it was their own strength and will that got them to the top of the granite pedestal in the Yosemite Valley.

“When we first climbed the North American Wall on El Cap in 1964, we thought, ‘Well, that proves that any big wall in the world can be climbed,'" said Yvon Chouinard, founder of Patagonia. "We never dreamed they could be climbed all free! Sending the Dawn Wall leaves Pope Francis with no choice but to admit our closest relative is the chimpanzee.’”

Jorgeson's Facebook page provides an incredible look into their journey sharing the many moments they encountered while trekking up the world's largest granite monolith, which began Dec. 27.

Here's one of my favorite entries:

Even President Obama congratulated the climbers with this tweet:

So proud of @TommyCaldwell1 and @KJorgeson for conquering El Capitan. You remind us that anything is possible. -bo pic.twitter.com/XcDwHqv2ry — The White House (@WhiteHouse) January 15, 2015

In another inspiring battle late into the night Kevin managed to send pitches 18, 19, and 20. Clouds swirled all around It was truly a surreal scene. Tomorrow we leave our bacecamp and blast towards the top. With some luck we will be standing on top in a couple days. I an excited to walk on flat ground again although I am sure I will truly miss this experience. Great photo of what has been out home for the past 17 nights @coreyrichproductions @bigupclimbing.