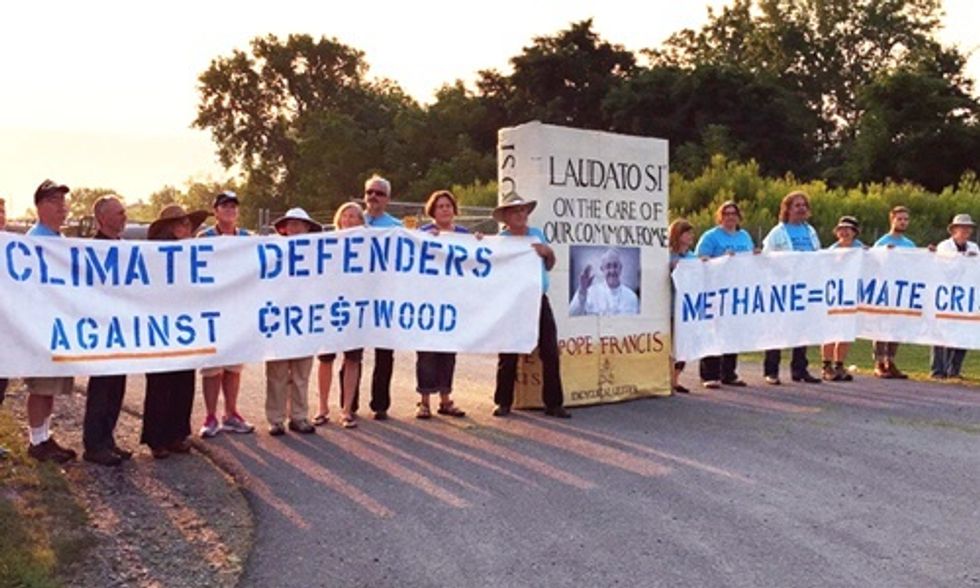 In a peaceful act of civil disobedience against the proposed gas storage that highlighted the climate crisis, 19 people formed a human chain shortly after sunrise this morning at the north entrance of Crestwood Midstream on Route 14. They blocked two tanker trucks attempting to enter the facility. Among the blockaders were Tony Del Plato, famed chef and co-owner of the Moosewood Restaurant and the Reverend Lesley Adams, retired chaplain of Hobart and William Smith Colleges and current resident of Schuyler County.

Schuyler County deputies arrested the 19 protestors shortly after 7 a.m. as they read aloud from Pope Francis’ recent encyclical letter on climate change, “On Care for Our Common Home.” All were taken into custody, charged with trespassing and released.

19 arrests today = 359 total. Like the #climate, we have passed 350. #responsibility pic.twitter.com/ZJUU5demzD

To illustrate the contribution of natural gas to global warming, blockaders held banners that read “Methane = Climate Crisis” and “Climate Defenders Against Crestwood.” A seven-foot replica of the Encyclical was also part of the blockade.

Today’s arrests bring the total number of arrests to 359 in the 10-month-old civil disobedience campaign.

Their recitation from the Pontifical document continued the reading that began on June 30 and has continued throughout the summer.

None of the protesters this morning had been previously arrested as part of the We Are Seneca Lake movement, which opposes Crestwood’s plans for gas storage in lakeside salt caverns and which has been ongoing since October 2014.

“Scientists tell us that 350 parts per million is the upper limit for carbon dioxide if we want a stable climate for food production," said Moosewood co-owner and chef, Tony Del Plato, 67, said, We have far surpassed 350. That’s an S.O.S. signal. Today, we surpassed 350 arrests at the gates of Crestwood. That’s an S.O.S. signal, too. Crestwood’s plans to store massive amounts of leaky methane here is a threat to water, food, climate and life itself.”

Earlier this month, the 19 owners of Ithaca’s famed Moosewood Restaurant joined a coalition of more than 340 Finger Lakes businesses and municipalities in opposition to Crestwood.

“In the Episcopal church, we often end our service with the words, 'Send us into the world to do the work you have given us to do, to love and serve.' My work today is to resist Crestwood," said Reverend Lesley Adams, 57, now a resident of Hector, in Schuyler County. "I just don't feel I can sit idly by while Crestwood fills unstable, unlined salt caverns under Seneca Lake with highly pressurized flammable material. If there are fiery explosions killing people or huge increases of salinity killing fish and plants and I have not worked to prevent it, how will I be able to live with my conscience?”

Today’s arrests bring the total number of arrests to 359 in the ten-month-old civil disobedience campaign. Photo credit: We Are Seneca Lake

Peter Arena, 50, of Interlaken in Seneca County agreed. “The plans of Crestwood Midstream to inject millions of cubic feet of pressurized, volatile gases beneath Seneca Lake are a direct threat to the well-being of myself and all that I love," he said. "I believe, as a man raised in the teachings of St. Francis, I have been entrusted to protect and steward this place where I am rooted. Standing here in the path of this industrialization and its consequent damages is my moral duty and obligation.”