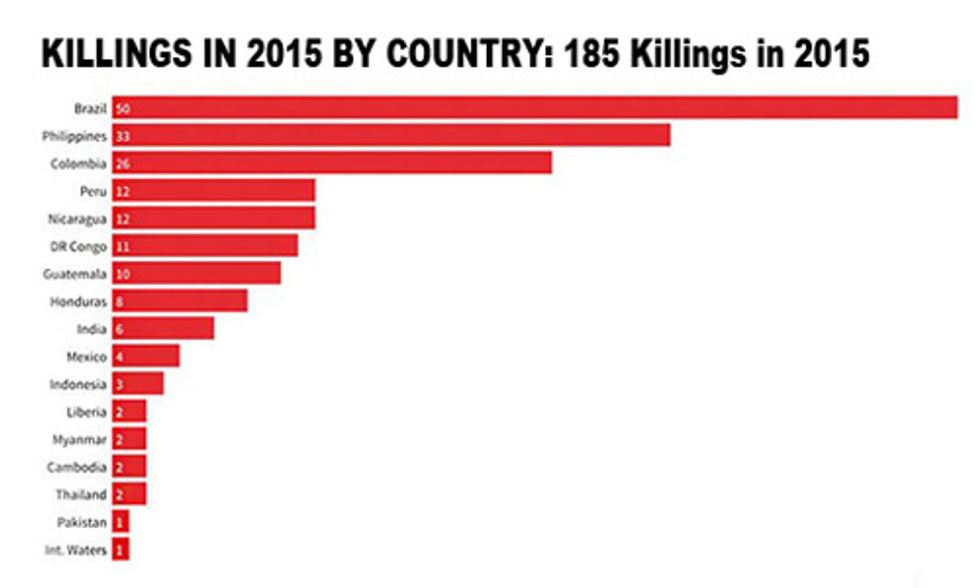 Scores of people around the world were murdered last year while trying to protect their communities from illegal mining and logging, palm oil agriculture and other industrial development projects, according to a London-based environmental and human rights organization.

The number of confirmed killings—185 activists across 16 countries—increased by 59 percent from 2014, according to Global Witness. It was the highest death toll in one year since the group began tracking such killings in 2002, said campaign leader Billy Kyte, who wrote the group's new report on the persecution and murders of environmental and land rights activists in 2015.

The nation with the highest death toll was Brazil, where there were 50 confirmed murders of environmental activists, Global Witness found. In the Philippines, 33 were killed, including 25 indigenous Lumad involved in opposition to mining on their ancestral lands in the Mindanao region.

The total number of killings may have been much higher, Kyte said, because “there's many areas of the world where we can't get information and there's under-reporting because of media repression, such as China, Central Asia and parts of Africa."

Among 2015's unverifiable deaths, “between 100 and 200 people were killed in protests over development in the Oromia province, in central Ethiopia," he said. “But we need to have names of the people, when they were killed and a direct link to the cause. There was no media that could tell us the names of those people."

Government corruption contributed to the murder rate, according to the report. Kyte pointed to the toll in Mindanao, which included the Sept. 1 murders of three Lumad community leaders: Emerito Samarca, Dionel Campos and Bello Sinzo. Campos and Sinzo were “publicly executed in front of their community. The perpetrators have all been identified," Kyte said. “They came from a paramilitary group that is known to work for mining companies in the region." But “people from that paramilitary group were seen drinking with members of the Filipino military weeks later," he added, in a situation emblematic of “collusion between industries and governments" worldwide.

Global economic forces are also implicated in the death toll. “There are two links," Kyte said. “One is the demand we have in the West for a lot of these products and more often than not we don't ask questions about where they come from." His research linked illegal mining to 42 killings of activists in 2015, agribusiness to 20, hydropower dams and water rights to 15 and illegal logging to 15.

Western investments in development projects that trample on the land rights or resources of local communities is another link, Kyte said, noting that Dutch and Finnish development banks helped finance the Agua Zarca dam, a Honduran hydropower project proposed for a river sacred to the nation's indigenous Lenca people. Berta Caceres, a Lenca who won the prestigious international Goldman Environmental Prize in 2015 for leading grassroots opposition to the dam, was murdered in March after years of threats.

“The fact that Berta Caceres was killed—someone who had a very high media profile—suggests that it's fair game for anyone to be targeted," said Kyte, although the global condemnation of her murder appears to be having an effect. “Although there's a lot to be desired in terms of the political masterminds behind Caceres' killing, at least international pressure led to the arrests of those who pulled the trigger and killed her."

After Caceres' colleague Nelson Garcia was killed within weeks of her murder, both Dutch FMO and Finland's Finnfund suspended payments to the project.

Global Witness is calling for increased protection for environmental activists, more national and international support for their civil and human rights and governmental recognition of indigenous and local land rights. “But ultimately, when a human rights violation takes place, someone responsible needs to be held to account," said Kyte, including companies if they are involved. “There have to be investigations of these crimes."