18 Day Fast Comes to an End 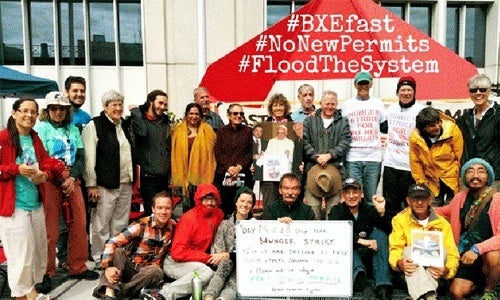 “The gift of the Earth with its fruits belongs to everyone.” — Pope Francis, Laudato Si’, paragraph 71.

There were many kind people, including some Federal Energy Regulatory Commission (FERC) employees, who thanked me or had supportive things to say during the 18 days that I fasted on water only in front of FERC with 11 other sisters and brothers from Sept. 8 – 25. But there are three people whose words I doubt I’ll ever forget. 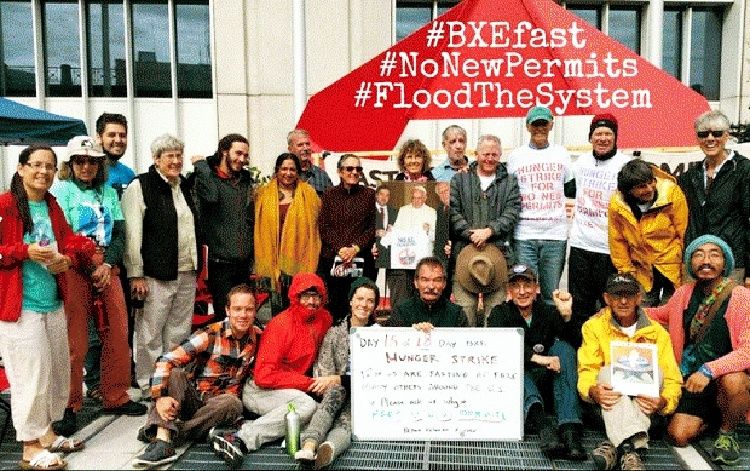 In Washington, DC, 12 people that fasted and other supporters set up camp in front of FERC on the sidewalk every work day from 7 a.m. to 6 p.m.

There was the young black woman whose job was to staff a small booth by the entrance to an underground parking lot just across from the main employee entrance to FERC. She was friendly and over the three weeks that I stood across from her during the work week, holding signs and distributing leaflets to FERC employees going into or leaving work, we often exchanged small talk and smiles. About a week before it ended she commended us on our courage. Then, on the 15th day, she told me, “Some women came by yesterday, asking me, ‘What are they doing here?’ and I told them, ‘They are taking action for all of us.’ Some of us have jobs and have to pay bills and can’t do what you’re doing, but I think what you are doing is important.”

Then there was the Homeland Security Federal Protective Services policeman, a tall, tough-looking, white guy, who came by to talk to me on day 18, asking how I was doing, clearly impacted by our willingness to suffer for what we believed in. After a couple of minutes he said, “I’ve seen lots of groups demonstrating on issues, but yours is the most persistent one I’ve ever seen.”

But the most profound interaction I had was with a woman who might not have known I was fasting. She was an old white woman, on crutches, looking like she was homeless, a beggar on the DC Metro subway. I had seen her earlier in the 18-day ordeal; she had come up to me asking for money. On day 16, the day the Pope was in town meeting with President Obama, on my way home from FERC in the evening to the church where we stayed every night, I saw her again. We were both standing on the Metro platform and I had a mounted, blown-up picture of the Pope holding a sign which said, “No al Fracking.”

She came over to me, our eyes connected and she said, to paraphrase, “You know, I know all about Jesus Christ and everything, but I just want to say that if it’s not about unity, it doesn’t mean crap.” I had listened carefully and what she said rang true, was genuine and deep, and I responded, “Yes, you’re right. That is absolutely true.”

The Beyond Extreme Energy-organized “Fast for No New Permits” was not explicitly about “unity.” It was the latest in a now-over-a-year campaign focused on what we call “the most dangerous federal agency most people have never heard of.” We are doing everything we can think of to throw a nonviolent wrench into the gears of the FERC machinery. This semi-independent agency has just kept grinding out permit after permit for the expansion of fracked gas infrastructure, with virtually no rejections of gas industry proposals, from what we’re able to tell, for many, many years.

The idea of doing a serious fast emerged a few months ago as some of us realized that the Pope was going to be in DC in late September, the Pope who has been outspoken about the need for action on the climate crisis and who, yes, had no problem being photographed a couple years ago with that “No al Fracking” sign.

And so on Sept. 8, the day after Labor Day, 12 of us, from ages 19 to 72, began a diet that consisted of water, salt and potassium. Ten of us continued on that diet until the 25th, the day after the Pope’s speech to the U.S. Congress. One faster had to end it around day 10 because of serious physical difficulties he was encountering; the other did so after about 14 days because of her need to build back some strength before joining a 900-mile walk from Rome to Paris beginning next week in connection with the early December UN Climate Conference.

There were at least 100 other people who fasted around the country, including several who fasted for 18 days also, as I understand it, in Oak Flat, Arizona, protesting federal plans to take land in Tonto National Forest sacred to local Apache nations and give it to multinational copper companies to mine.