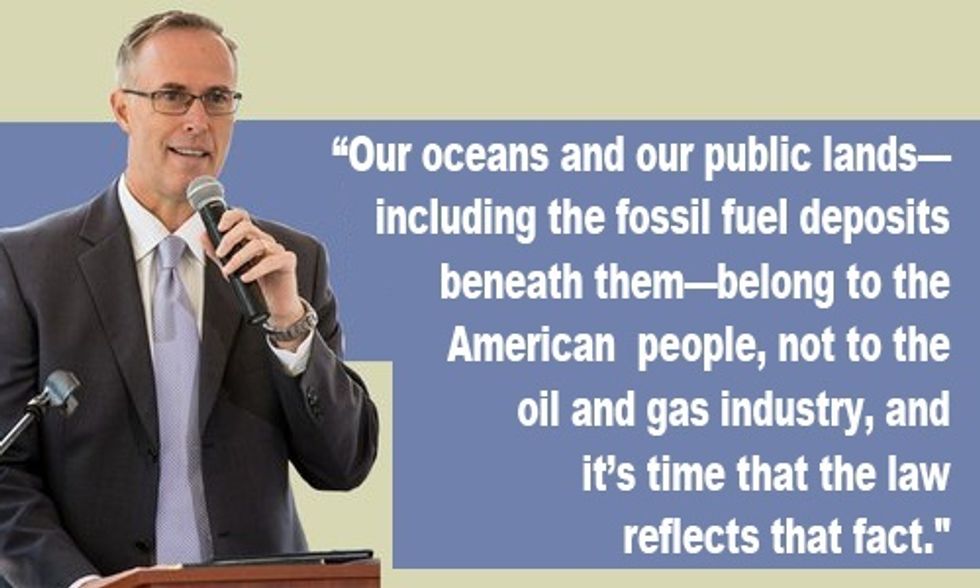 Congressman Jared Huffman (D-San Rafael) and 16 other members of Congress introduced today the Keep it in the Ground Act. If passed, the bill would reduce carbon emissions by permanently barring new fossil fuel leases on all federal public lands and in federal waters.

“Our nation’s capacity to transition towards clean energy sources is expanding at a record pace,” said Rep. Huffman. “However, there is still much to be done to break our unhealthy dependence on fossil fuels. Our oceans and our public lands—including the fossil fuel deposits beneath them—belong to the American people, not to the oil and gas industry, and it’s time that the law reflects that fact."

Specifically, this legislation would:

"Anyone who does the math of climate change knows we need to keep most fossil fuel underground,” co-founder of 350.org Bill McKibben said. “Public lands—as multiple presidential candidates have pointed out—are the logical place to start, and this is even more obvious in the wake of the Supreme Court stay on the president's Clean Power Plan. In a record hot world, let's hope Congress acts on this at record speed; we will do all we can to make it happen."

"Thanks to Representative Huffman’s leadership, we have a concrete plan to help meet the climate goals set in Paris and accelerate our transition onto clean, renewable energy," Sierra Club Executive Director Michael Brune said.

In January, the Obama administration announced it was putting an immediate suspension on all future and modified coal leases on public lands, however, this new legislation is much stronger as it includes permanently banning extraction of all fossil fuels.

This bill signifies a strong push by Democrats who are intent on supporting President Obama's climate agenda, even though passage of this bill is extremely unlikely in the Republican dominated Congress.

"The Keep It in the Ground Act sets the bar for what the U.S. can and should achieve in the global fight to prevent climate catastrophe and to protect our public lands and waters," Friends of the Earth climate campaigner Marissa Knodel said. "It also serves notice to fossil fuel empires that climate, justice and health advocates will end their reign of destruction.