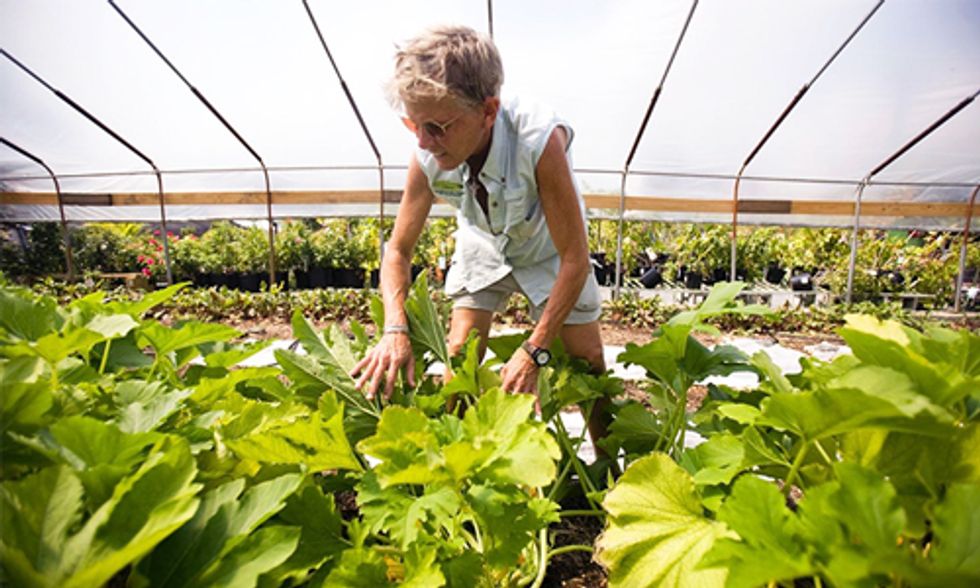 The UN Food and Agriculture Organization has estimated that there are more than 570 million farms in the world. Behind each farm—at least 90 percent of which are considered family farms—is a farmer or team of farmers, collectively responsible for growing the world's food. Food Tank is highlighting farmer heroes who go beyond cultivating the land, acting as employers, experimenters, keepers of tradition and contributors to healthy lifestyles.

Across the U.S. and the globe, farmer heroes like Mary Seton Corboy are advocating for sustainability, ecological balance, preservation of traditions and much more. Photo credit: Jennifer Kourkounis

Family farmers are key players in job creation and healthy economies, supplying jobs to millions and boosting local markets that are vulnerable to difficult climate and financial hardship, particularly because of the disproportionate amount of work required given the financial returns in farming. Farmers aren't just food producers—they're business women and men, they're teachers in their communities, they're innovators and inventors and they're stewards of the land who deserve to be recognized for the ecosystem services they provide that benefit us all.

Meet 17 farmer heroes from around the world, working for innovation, sustainability, the environment and local economy, all doing more than putting food on our plates.

1. Janki Bai (Madhya Pradesh, India): In the Madhya Pradesh state of India, Janki Bai sacrificed an acre of her semi-arid land for the digging of a watershed pond in 2013—a significant economic project for the community. Not only could she begin to grow rice on her land, but the pond, built with the help of the International Crops Research Institute for the Semi-Arid Tropics quickly began to benefit farms within a half a kilometer of hers. Today, her family has increased financial stability and her community has a more reliable water source.

2. Mary Seton Corboy (Philadelphia, Pennsylvania, U.S.): Founder of Greensgrow, a Philadelphia urban agriculture non-profit, in 1998 on the former site of a galvanized steel plant. Greensgrow has since become a model for sustainable food systems in Philadelphia and beyond. With CSAs, farmers markets and more, Corboy is heralded for not only growing vegetables, but changing attitudes around food.

3. Ibrahima Coulibaly (Mali): Chosen as one of six Special Ambassadors for the International Year of Family Farming in 2014, Ibrahima Coulibaly is the president of the National Coordination of Farmers' Organizations of Mali (CNOP). Under Coulibaly, CNOP has contributed to the first agricultural policy in Mali focused on family farming. CNOP has projects for food security, natural resource management and for strengthening farmers' organizational and financial capacity.

4. Jess & Matt Fealy (Mareeba, Queensland, Australia): In 2012, the Fealys moved across Australia to begin lives as family farmers. In Australia, 99 percent of farms are family farms. Their farm, Blue Sky Produce, makes them proud to contribute to their rural community. They are grateful for the opportunity to use a variety of skills: “one day you're repairing a wiring harness on the tractor, the next you're stripping down a chainsaw, the day after that you're pouring over soil and leaf analysis," the Fealys said.

5. Bryan Gilvesy (Tillsonburg, Ontario, Canada): Originally a tobacco farmer, Bryan Gilvesy has become an ecological agriculture champion throughout Ontario with his sustainable cattle ranching operation, Y U Ranch. He works with Alternative Land Use Services, which supports farmers in restoring and preserving natural resources throughout Canada.

6. Thomas Harttung (Jutland, Denmark): Thomas Harttung is the Co-Founder of Aarstiderne an organic produce and meal box delivery program that now supplies more than 45,000 customers across Denmark and Sweden with fresh, nutritious food. He serves as the Chair of the Trustees for the Sustainable Food Trust, a nonprofit committed to building a food system that causes the least possible harm to humans and the environment. Harttung is also on the board of the Nordic Food Lab which is dedicated to exploring food diversity and potential in the Nordic region. He has an 18,000 acre biodynamic estate in Jutland.

7. Larry Jacobs (California, U.S.): Larry Jacobs suffered illness from pesticide exposure as a young farmer and dedicated his work to pesticide-free farming. Jacobs Farm, now 35 years old and the largest organic culinary herb provider in the U.S., won a notable lawsuit over a pesticide applicator whose application on a nearby field found its way to Jacobs's dill crop. Jacobs and his wife, Sandra Belin, have also helped a cooperative of family farmers in Baja California, Mexico, form an organic growers association called Del Cabo, which now imports millions of pounds of organic produce into U.S. markets.

8. Rahab Kithumbi (Ng'arua Division, Laikipia West, Kenya): Rahab Kithumbi began her research with observation of poultry in a farmer-to-farmer exchange visit. After the visit, Kithumbi experimented with rearing chickens and turkeys and found an increased hatching rate when reared together. Turkeys also provide food for her family and more manure than chickens, useful as fertilizer. She displayed her innovation in 2013, becoming one of the first participants in Prolinnova's Farmer Innovation Fair in Nairobi and earning the name “Mama Turkey" in her village.

10. Edward Mukiibi (Uganda): Edward Mukiibi is the current vice president of Slow Food International. Living in Uganda, Mukiibi has experience developing community and school gardens in Africa through his Developing Innovations in School and Community Gardens project and sees great potential in Slow Food International's 10,000 Gardens in Africa goal. Mukiibi is working “to promote our own food gastronomy, to strengthen traditional food systems and communities and to defend African biodiversity."

11. Kathy Ozer (Washington, DC, U.S.): Kathy Ozer is the executive director of the National Family Farm Coalition, where she has worked in farm policy for more than two decades. Ozer dedicates her work to ensuring that “family farmers and fishers can not only survive but thrive in order to support themselves, their families and their communities." She has expertise in the global credit and food crisis and the dairy farmer crisis.

12. Denise O'Brien (Ames, Iowa, U.S.): An Iowa native, Denise O'Brien founded the Women Food and Agriculture Network (WFAN) in 1997 to coordinate information and networking for women as supporters of sustainable agriculture and healthy food systems. WFAN provides women with agricultural educational opportunities, an apprenticeship program, as well as tools for serving as political advocates for agriculture. O'Brien farms and raises organic chickens and turkeys with her husband on their farm in southwest Iowa.

13. Bernie Prince (Washington, DC, U.S.): Bernie Prince is the co-founder of FRESHFARM Markets, an operator of producer-only farmers markets in the Chesapeake Bay region. Since 1997, FRESHFARM has been helping to provide opportunities for local farmers and has branched into other areas, like the FoodPrints nutrition and healthy eating education program for elementary school children. After retiring as co-executive director of FRESHFARM in 2015, Prince now spends more time on her 10-acre farm in Georgetown, Delaware, where she and her husband grow organic fruit, vegetables and flowers.

16. Mike & Gayle Thorpe (East Aurora, New York, U.S.): The Thorpes run two organic family farms—one in New York and the other in Florida—with an more than 540-member CSA. The Thorpe family began farming in 2001, supporting a 42-member CSA, always with a “[belief] in nurturing the soil" by using well-composted material for the healthiest nutrient balance. The Thorpe farms are successful examples of true family farm CSA.

17. Arkhiben Vankar (Gujarat, India): Arkhiben Vankar is known as The Pesticide Lady in her community in the Indian state of Gujarat. She developed a toxin-free pesticide from herbal plants that has shown to be as effective as chemicals on pests like mealy bugs, white flies and aphids. Not only is this pesticide safer for farmers, but Vankar's pesticide is cost-effective too.