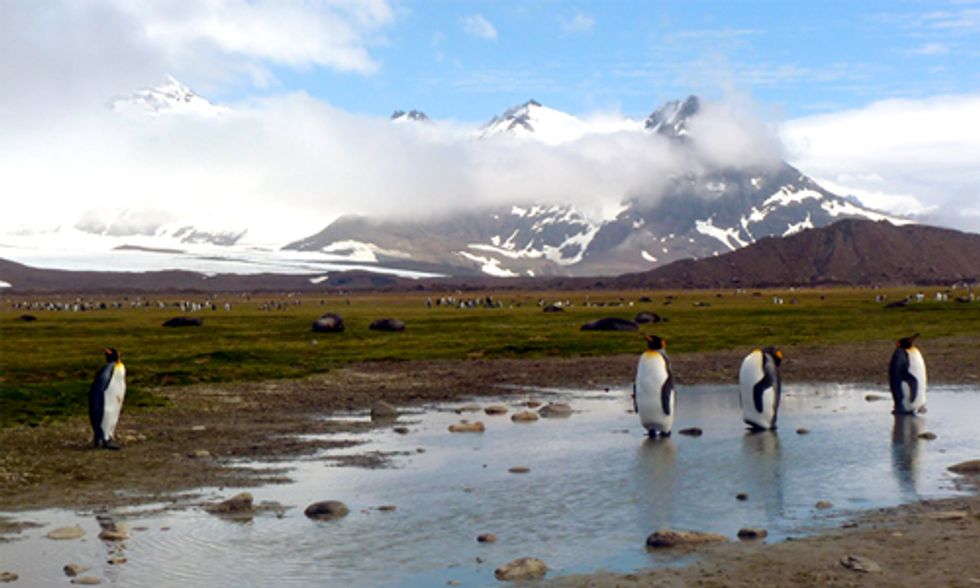 I had the chance last week to interview Stephanie Flack, executive director of the Environmental Film Festival. The festival runs from March 17-29 in Washington, DC. Now in its 23rd year, it’s the nation’s largest and longest-running environmental film festival, which will screen more than 160 films on a wide range of environmental issues, and 96 of those films will either be DC, U.S. or world premieres.

"Penguin Counters" will be featured in the Environmental Film Festival's Climate Connections. The film examines how penguins in Antarctica are coping with their changing climate—and the implications for humans. Photo credit: Harriet Getzels

A. Our theme for around one-quarter of our 160+ films this year is “Climate Connections,” exploring the impact of climate change on our world. Two of our films highlighting this subject are “Ice & Sky,” Oscar-winning filmmaker Luc Jacquet’s work-in-progress about French glaciologist Claude Lorius’ 60-year study of climate change in glaciers and “Penguin Counters,” examining how penguins in Antarctica are coping with their changing climate—and the implications for humans. We are also presenting a panel discussion with The Climate Reality Project, “Climate Connections: Filmmakers as Catalysts for Change,” considering how storytelling and film can effectively address the climate crisis and a special evening of film and discussion celebrating Earth Hour with World Wildlife Fund.

Q. Why is it important to keep offering this event in Washington, DC?

A. Washington, DC, our national capital, is an ideal place to present the Environmental Film Festival because it has perhaps the greatest concentration of national and global decision makers and thought leaders in the world. It also has experts on many of the topics featured in the films we show. By presenting our films here, we can reach people in government, NGOs and a wide variety of other organizations who shape national and global environmental policy. I think it’s more important than ever to keep doing the festival as environmental challenges intensify in severity and scope, and documentary films illuminate these vital topics. Our focus on climate change is especially timely this year, shining a light on the global climate imperative prior to the Paris United Nations Climate Conference in December.

Q. Orion's current issue has a special section on Cuba, so I was glad to see the festival's own focus on the island nation. What will the Cuba program tackle?

A. In our program, “Frozen in Time: Cuba’s Pristine Coral Reefs and Their Future After the Embargo,” marine biologist Dr. David E. Guggenheim, who visits Cuba often, will explore its vibrant coral reefs and consider the impact that lifting the U.S. embargo could have on the country’s environment. Guggenheim will also show clips of healthy coral reefs in Cuba’s National Park, Gardens of the Queen and from the film, “Cuba: The Accidental Eden,” showcasing Cuba’s virtually untouched wild landscapes. He will discuss lessons the rest of the world can learn from Cuba’s protection of its environment.

Q. What life experiences prepared you to run this massive, independent arts event? I know you love film since you’ve watched the AFI top 100.

A. The festival truly is a massive and impressive undertaking. I’ve attended it casually as an audience member for 20 years, and appreciated the films and discussions without a full understanding of the incredible work and organization that went into identifying, selecting and securing the films—not to mention coordinating with the 55+ venue partners and many more collaborating partner organizations that help to host and present the festival.

I worked in conservation for 20 years before moving to the festival. During those years, I managed large teams from my organization and partner organization to meet shared objectives—in many cases, teams over whom I had no direct authority—so I had to define and help steer the teams towards meeting shared objectives. One of these collaborative, multi-partner projects won an award from the Department of Interior as a great example of a public-private partnership. Plus, I am a mother of three children ages 10 and younger, so I have some experience keeping a bunch of balls in the air.

And to answer your second question: the AFI Top 100 is a list of the Top 100 films of the first 100 years of moviemaking. The list was determined by the American Film Institute from a poll of more than 1,500 artists and leaders in the film industry who chose from a list of 400 nominated movies. I have always loved film, it has been my interest and hobby beyond my professional focus throughout my career in conservation, so the Environmental Film Festival has been a perfect marrying up of my professional and formerly personal interests.

Q. What are you most looking forward to at this year's festival?

A. This year, I am most looking forward to our opening night festival kick-off with “Bikes vs Cars” on March 17; our closing night and Advocacy Award screening presentation of “Racing Extinction” on March 29; and our three other award evenings: presenting the Eric Moe Sustainability Film Award for a short film in sustainability to “Silent River;” screening George Butler’s new film “Tiger Tiger,” which will win our new William W. Warner Beautiful Swimmers Award for a film reflecting a spirit of reverence for nature; and showing Sturla Gunnarsson’s new film “Monsoon,” which will win our Polly Krakora Award for Artistry in Film. In addition, we have two great Saturday nights lined up: Jean-Michel Cousteau’s Secret Ocean 3D on March 21 at the National Museum of Natural History, and the new film “Planetary” in association with the annual celebration of Earth Hour with World Wildlife Fund on March 28 at the National Geographic Society.

Are There More Oil and Gas Wells in LA Than Movie Stars?