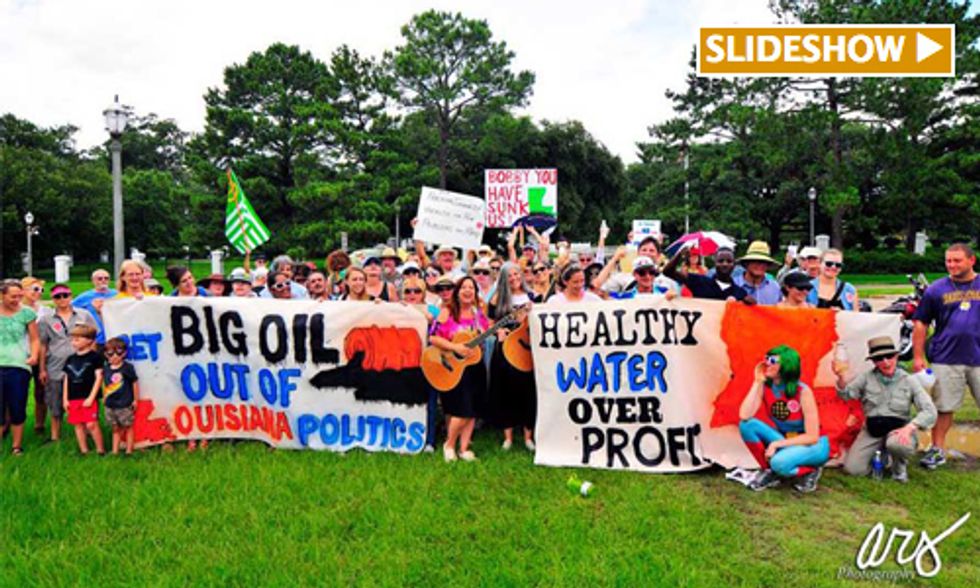 A group of concerned citizens walked 155-miles in eight days from Grand Isle to Baton Rouge, along Louisiana Highway 1. They arrived at dusk Friday via the east bank levee of the Mississippi River and headed to Gov. Bobby Jindal's mansion yesterday for “Flood into Baton Rouge,” an event focused on water quality issues and threats to clean drinking water by the oil and gas industry in communities throughout the state.

The march was organized in response to Governor Jindal’s signing of SB 469 into law (Act 544) earlier this month. Although the purported intent of the law was to kill the lawsuit filed against 97 oil and gas companies by the South Louisiana Flood Protection Authority–East, the law was so hastily and broadly written that Attorney General Caldwell and more than 100 legal scholars from across the nation urged the governor’s veto because as written, the law might jeopardize the state’s claim to environmental penalties that will be levied against British Petroleum (BP) from the 2010 BP Macondo explosion, according to march organizer Mike Stagg.

Exempting the oil and gas industry from liability for their share of damages to the coast and jeopardizing the state’s claim to BP penalty money, leaves the state with a Coastal Master Plan that has a Phase I price tag of $50 billion and no revenue stream for its implementation.

“In haste to protect the most profitable industry in the history of the world, Governor Jindal and the state legislature have essentially issued a death sentence for coastal communities in Louisiana,” said Stagg. “We hope the march and gathering in Baton Rouge yesterday stimulates critical conversations statewide about how the oil and gas industry has come to see our wetlands and fresh groundwater as resources on which they have a greater claim than citizens.”

The six marchers crossed the Mississippi River carrying water taken from the Gulf of Mexico last Saturday at Grand Isle, which bears the onerous distinction as the place in North America most endangered by climate change. The water joined other “troubled waters” at the Governor’s mansion brought by residents from other parts of Louisiana who share the circumstances surrounding the threat that the oil and gas industry poses on their communities.

“We have long made a series of environmental tradeoffs that, if viewed separately, might not pose a long-term threat to the health and well-being of communities,” Stagg said.

“But the cumulative effect of decades of these tradeoffs has started to become apparent, with threats to ground water ranging from fracking in the Florida Parishes, to heavy industrial use by Exxon and Georgia Pacific in Baton Rouge, to pollution of the Ouachita River from plants located in Arkansas, to Lake Peigneur (where billions of gallons of drinking water might be used to carve salt dome storage caverns), to ground water pollution in the heavily industrialized sector near Lake Charles. Clean water is essential to life. We need to treat it as the precious resource that it is.”