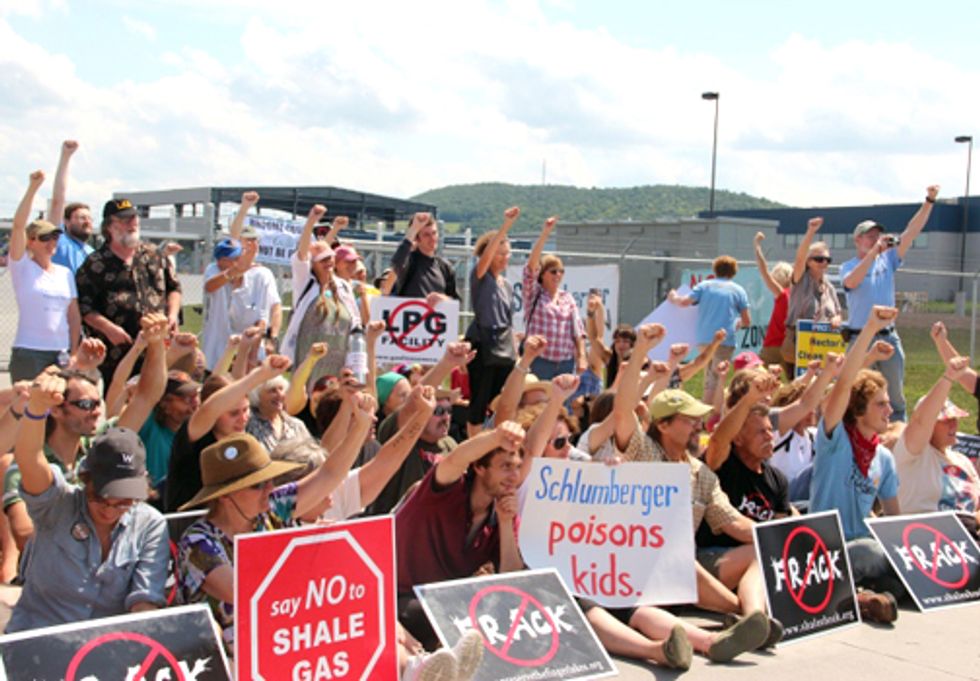 On Aug. 11, More than 150 people protested fracking at the Schlumberger facility in Horsehead, NY.

More than 150 protesters of all ages blockaded the Schlumberger Limited industrial facility in Horseheads, NY for nearly six hours today stopping operations at this twenty-four-seven plant that provides services and materials, including chemicals and silica sand, to oil and natural gas exploration companies, including hydraulic fracturing. More than 20 protesters were prepared to risk arrest by blockading trucks from entering the single-entry gate into the facility, but the peaceful protest ended in no arrests when the protestors left on their own volition after they reached their goal of closing down the plant for the day.

Schlumberger is the world’s largest oilfield services company with U.S. headquarters in Texas. The company has a revenue of $39.54 billion and currently operates in 85 countries. Schlumberger’s history is fraught with offenses all over the world. One violation occurred in 2009 when 295-gallons of hydrochloric acid spilled at the Chesapeake’s Chancellor well site in Asylum Township, Bradford County.

Schlumberger has refused to disclose the fracking chemicals that are stored at the Horseheads facility. However they not required to do so by law due to the Halliburton Loophole—a 2005 Bush/Cheney energy bill that exempts natural gas drilling from the Safe Drinking Water Act, preventing companies from having to disclose the chemicals used during hydraulic fracturing.

According to organizers, the purpose of today's action was threefold: to physically prevent fracking-related processes from taking place for a period of time, to show the public, industry and legislators that Southern Tier residents will stop at nothing to impede fracking, and to empower one another to use their bodies as a direct means of halting industry that continues to put profits over human health and the environment.

“Direct action is about directly confronting fracking at its source—industrial facilities. We cannot rely on politicians, many of whom are in industry’s pocket, to keep us safe. We have to stand up to this profit-mongering industry and shut them down ourselves. We have the right and responsibility to defend our land, water and communities in every way possible,” said Nell Gagnon, one of the organizers.

Though hydro-fracking has not yet begun in New York, Schlumberger currently operates in neighboring Pennsylvania. Pennsylvania residents spoke at the rally today, sharing stories of how fracking has made them and their families sick.

Sandra Steingraber spoke at the rally saying, “Fracking is a carcinogen-dependent process that destroys fresh water to blow up the bedrock under our feet in order to extract fossil fuels whose combustion is killing the planet and giving our kids asthma and increased risks for cancer and heart disease. As both a scientist and a mother, it is my job to say that clear air, safe water, and a stable climate are necessary for life. The anti-fracking movement is the civil rights movement of our time. And this action today is our lunch counter at Woolworth’s. This is our Greensboro moment. Governor Cuomo, which side are you on?”