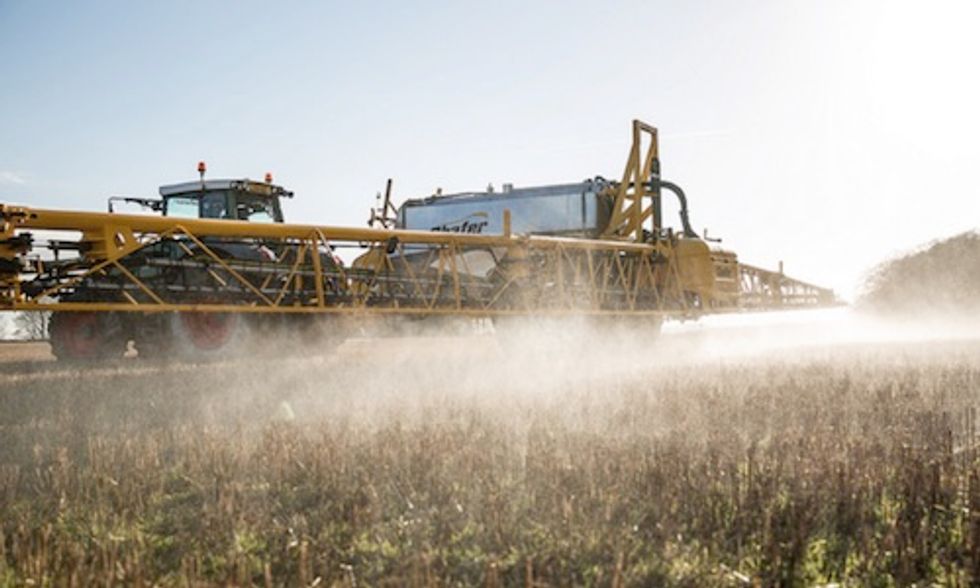 Roughly 150 Members of the European Parliament (MEPs) are taking a urine test today and tomorrow to see if glyphosate—the cancer-linked weedkiller—is in their system.

Glyphosate being applied to a field in North Yorkshire, England. In Europe, there has been growing controversy over the substance. Photo credit: Flickr

According to The Guardian, the move comes ahead of a symbolic vote on glyphosate's prohibition in the European Union this Wednesday.

The European Commission is proposing to grant the herbicide a new 15-year lease when it ends in June. However, in March, several EU member states, including France, Sweden, Italy and the Netherlands, led a very public rebellion over the relicensing, citing its purported health risks. The actually vote to re-approve glyphosate has now been postponed to at least mid-May.

Coupled with that, a new Yougov poll found that two-thirds of Europeans support a ban on glyphosate.

"A prohibition on the herbicide ingredient was backed by three quarters of Italians, 70 percent of Germans, 60 percent of French and 56 percent of Britons, in a survey of more than 7,000 people across the EU’s five biggest states," The Guardian wrote.

Green Party MEP Bart Staes told The Guardian “this poll clearly shows that the European public does not want ... the authorization of glyphosate, and certainly not until June 2031.”

Glyphosate has garnered a great deal of backlash in Europe ever since the World Health Organization's International Agency for Research on Cancer (IARC) classified the ingredient as a possible carcinogen last year.

The European Green party will vote on a resolution objecting to the commission's plans to reapprove the substance in Europe on April 13. "The finding that glyphosate is probably carcinogenic to humans by the WHO should be leading to a global moratorium on its use," the Greens said.

A number of studies have detected glyphosate—the “most widely applied pesticide worldwide”—in our immediate surroundings and even in human bodies. A 2013 Friends of the Earth Europe study reported people in 18 European countries have traces of glyphosate in their urine.

This past February, a German study found that 14 of the most popular brands of German beer tested positive for glyphosate, which inspired the MEPs to organize the urine sampling.

David Zaruk, a Brussels-based environmental health risk research analyst who runs the blog The Risk-Monger, questioned in a post if the MEPs are testing their urine as "a clever stunt" before their symbolic vote on Wednesday.

Zaruk published his email correspondence with Staes, asking him if tax dollars were paying for the tests. He also shared with Staes this meme floating on the Internet about wine's hyped up glyphosate risks compared to ethanol.

Here's an excerpt of Zaruk's email to Staes:

Are you also aware that the trace levels of glyphosate are so low as to be insignificant, and the fact that it is being expelled in urine is actually good news (as opposed to cocaine and alcohol). Ok, I suppose you really don’t care about facts ... maybe your voters will!

In response, Staes wrote back to Zaruk saying that the MEPs are paying for the urine tests out of their own pocket and added:

As a MEP I am for the last 17 years very active to fight for another kind of agriculture. For me and the Greens, glyphosate is the very incarnation of “modern agriculture,” a model that is not sustainable at all:

1. It stands for reckless monoculture: a non-selective herbicide—a broad band killer which kills all plants, algae, bacteria and fungi—is used to deal with a few pests, thereby creating massive effects on non-target organisms and biodiversity,

2. It is strongly linked to GMOs (56% of global use is for glyphosate resistant crops)—killing everything but the genetically engineered crop,

3. It stands for economic gains at all costs:

• it is used not only to kill unwanted weed, but also the crop itself prior to harvest to accelerate ripening and facilitate harvest (“desiccation”).

So what I do is far from a political gimmick.

Zaruk also responded to each of Staes' points in his blog post.

In recent news, France banned glyphosate mixed with the additive tallow amine due to its perceived risks to human health citing results from a November report from the European Food Safety Authority (EFSA).

Even though EFSA rejected the IARC's classification of glyphosate as a possible carcinogen and said it was “unlikely” to pose a public health risk, the EFSA admitted that it only examined glyphosate alone, not glyphosate formulations.

The adverse health effects of the herbicide, therefore, could be related to reactions with “other constituents or ‘co-formulants,’” the EFSA report said.

Tallow amine is one of the additives in Monsanto’s widely popular Roundup and aids in its effectiveness.

Monsanto, which has long maintained the safety of their flagship product, confirmed to Reuters they are one of the companies affected by the French ban, adding that the debate over glyphosate is “political.”