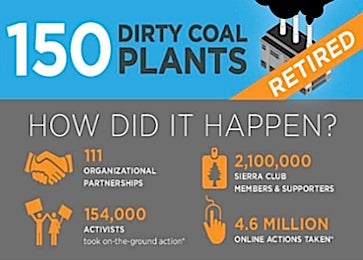 The Sierra Club and a growing coalition of local, regional and national allies announced yesterday the retirement of its 150th coal plant—a significant milestone in the ongoing campaign to move the country beyond coal no later than 2030. With the announcement that the Brayton Point Power Station in Massachusetts would retire by 2017, the campaign officially marked 150 coal plants that have announced plans to retire since 2010, spurring record increases in clean energy. 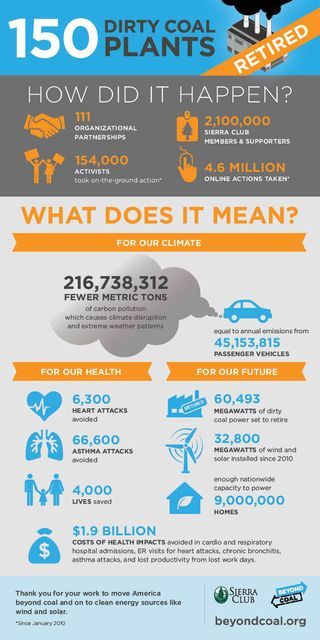 Pollution from burning coal contributes to four out of five of the leading causes of death, in addition to being a major cause of asthma attacks. According to the Clean Air Task Force, retiring these 150 dirty and outdated coal plants will help to save 4,000 lives every year, prevent 6,200 heart attacks every year and prevent 66,300 asthma attacks every year. Retiring these plants will also avoid $1.9 billion in health costs.

Members of the entertainment community heralded this victory for public health and our environment as a major step forward in protecting communities.

“The closure of the Brayton Point Power Station is a powerful example of how local action can have a global impact,” said Michael R. Bloomberg, philanthropist and Mayor of New York City. “Over the last three years, action by individual communities—in partnership with the Sierra Club and Bloomberg Philanthropies—has led to the closure of 150 coal plants, one at a time. We will continue to support those who are on the ground working to close the nation’s dirty coal plants, which kill 13,000 Americans every year and threaten the future of our planet.”

“Plant by plant and community by community we are not only curbing our country’s carbon pollution, but we are also saving lives,” said Michael Brune, executive director of the Sierra Club. “By moving our country off of dirty, dangerous coal, we are creating new opportunities for clean energy and thousands of new American jobs to protect workers and public health. The transition from coal to clean energy can and will transform our economy by establishing a huge new sector of good jobs that power our communities without poisoning our children.”

As utilities and energy companies realize that coal is an increasingly bad investment, they are transitioning their resources to cleaner, renewable sources of energy like wind and solar. Today, the U.S. has more than 60,000 megawatts of installed wind capacity, enough to power the equivalent of 15 million American homes. States including Iowa, Kansas and South Dakota already get more than 20 percent of their energy from wind power.

“I’m so inspired to know that the U.S. is now leading the world in reducing carbon pollution—showing that we can stop climate disruption,” said Sierra Club Ambassador Elle Macpherson. “As a mom and as an advocate, I’m happy to share the good news that we’re cutting our pollution and leading a global movement to protect our kids and our planet. Climate change isn’t just an environmental issues, it’s a humanitarian issue that leads to suffering around the world. It’s important for us to act now.”

“This is the most significant advancement in our history thus far to help usher in a clean energy future for all,” said activist Edward James Olmos. “I commend the Beyond Coal campaign for their work protecting families in low income communities who suffer the most from toxic, cancer-causing coal pollution.”

“We must also continue to fight for good union jobs and a guaranteed livelihood for coal workers, who go to work every day to support their families and deserve safe and secure jobs,” Olmos continued. “We can power our country without poisoning our children.”

Solar is the fastest growing energy option in the U.S. The clean energy industry now employs nearly 200,000 Americans nationwide. The milestone of 150 coal plants retired shows that the country is at a turning point, moving away from old and outdated fossil fuel industries, and embracing the millions of good jobs that cleaner energy sources like wind and solar will create.

“It’s amazing to see how many people from different backgrounds have come together to build this movement,” said actor and environmental activist Ian Somerhalder. “It fills me with immense hope to witness our youth standing up for their future—young people recognize most that keeping the old, outdated energy is much like staying in diapers.”

“Our diverse, creative, collective youth present the single greatest resource out there—we must continue to enable and support them to innovate and champion smarter, more sustainable energy solutions,” Somerhalder concluded.