150,000 Stand With Peruvian Woman in Fight Against World’s Largest Gold Mine 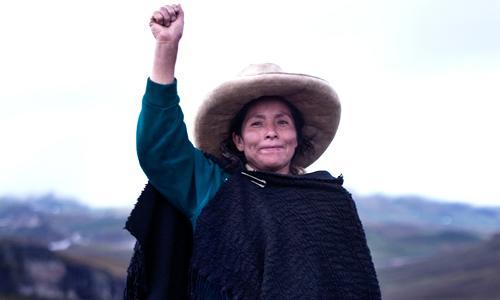 Community activists from Cajamarca, Peru appeared at the annual shareholders’ meeting of Denver-based Newmont Mining Corporation this week to deliver a petition bearing 150,000 signatures protesting the company’s practices in the region, and demanded that it live up to its own goals for human rights and sustainability. 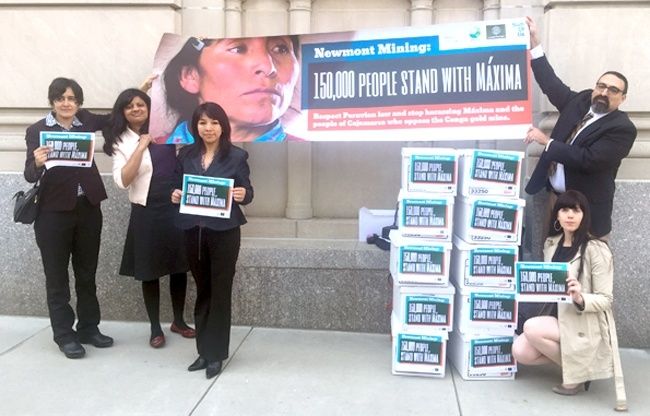 Newmont is majority owner of the massive Peruvian gold mine Yanacocha, the second largest gold mine in the world, and its planned Conga gold and copper mine nearby would be even larger, requiring a farming community to move and the four lakes they rely on for irrigation to be drained.

But the community has so far refused to relinquish its treasured land and lakes, and in response activists say the company has reacted with intimidation and harassment.

One person particularly in the company’s cross-hairs is Máxima Acuña de Chaupe, says activist Mirtha Vásquez, a Peruvian lawyer at Wednesday’s meeting. Acuña de Chaupe’s land abuts one of the four lakes but after de Chaupe refused to sell her land in 2011, nongovernmental organizations (NGOs) like Earthworks reported that her family became the target of harassment and violence in the form of beatings and destruction of the family home. Then Newmont sued her for “land invasion” and violent retaliation, which it lost on appeal in December 2014. 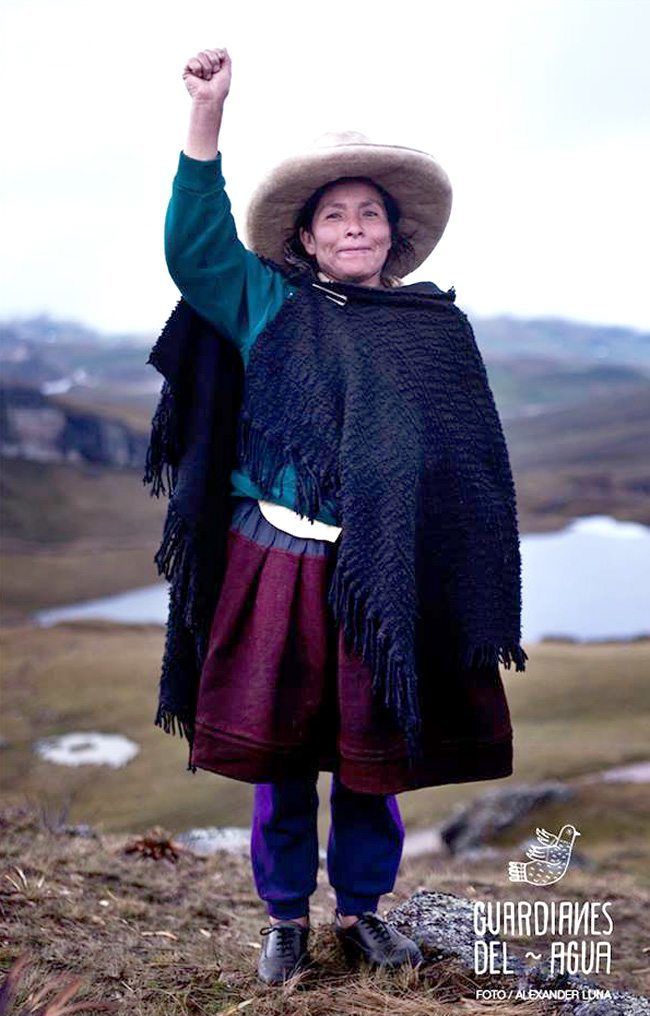 Acuña de Chaupe has become the target of harassment and violence because she refuses to cede her land to Newmont. Photo credit: Alexander Luna/Project Guardianes del Agua

Despite this legal victory, activists say that intimidation and threats against Acuña de Chaupe have continued, reporting that the family’s home was demolished again in February 2015, this time by a group of 200 armed men.

“Newmont’s leadership must publicly renounce its harassment of Máxima Acuña de Chaupe and other Cajamarca residents who oppose the Conga mine,” said Vásquez in a prepared statement. “Otherwise Newmont will become globally infamous for discarding their commitments to human rights and community engagement as soon as they become inconvenient.” A Cajamarca resident, Vásquez is director of a local NGO called Grufides and is also legal counsel to Acuña de Chaupe, who declined to travel to the U.S. citing fears of what would happen to her farm and family in her absence. 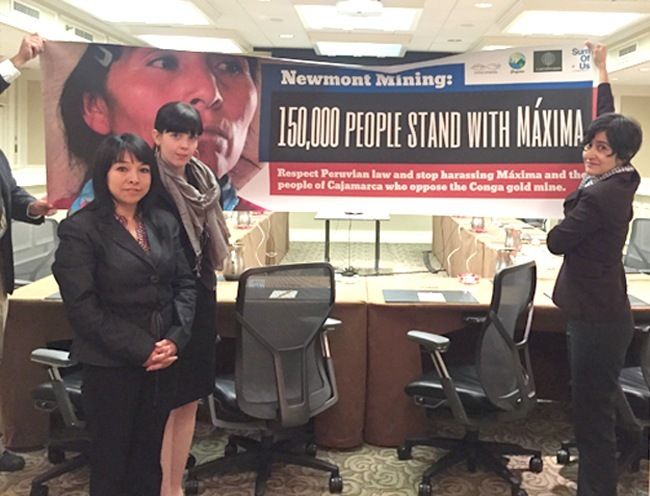 Keith Slack, manager of Oxfam America‘s global extractive industries team, which tracks the impacts of mines on local communities, agreed with Vásquez. “The company needs to listen to the local population and not move forward with the Conga mine. It should find ways to address Máxima’s situation that are conciliatory and don’t rely on brute force. From the beginning there’s been an unwillingness to listen and take measures that build trust.”

For its part, Newmont maintains that it and Yanacocha always strive to be respectful of neighboring communities, and that they will not proceed without clear social acceptance. But in the case of Acuña de Chaupe, spokesman Omar Jabara continued to maintain that the family is illegally squatting on the company’s land. “On many occasions, the company has tried to resolve the dispute through direct dialogue, and remains open and willing to doing so. In the meantime,” he said by email, “Yanacocha is obliged to continue pursuing judicial avenues to re-establish its legal right to the property, while making every effort to reduce tensions and minimize conflict.”

However, Earthworks International Program Director Payal Sampat maintains that it’s too late to build bridges or reduce tensions. “The community of Cajamarca has said loud and clear—and repeatedly—that they reject the Conga mine. Instead of listening to the community and respecting their wishes, Newmont has employed security forces to intimidate and harass those who oppose them. This ‘scorched earth’ approach is hurting not only the people of Cajamarca, but Newmont’s reputation and business as well.”

Whether or not Newmont’s shareholders agreed with her on Wednesday, actions like it will continue to educate the world on the incredibly high cost of gold mining for both people and planet in places like Cajamarca.