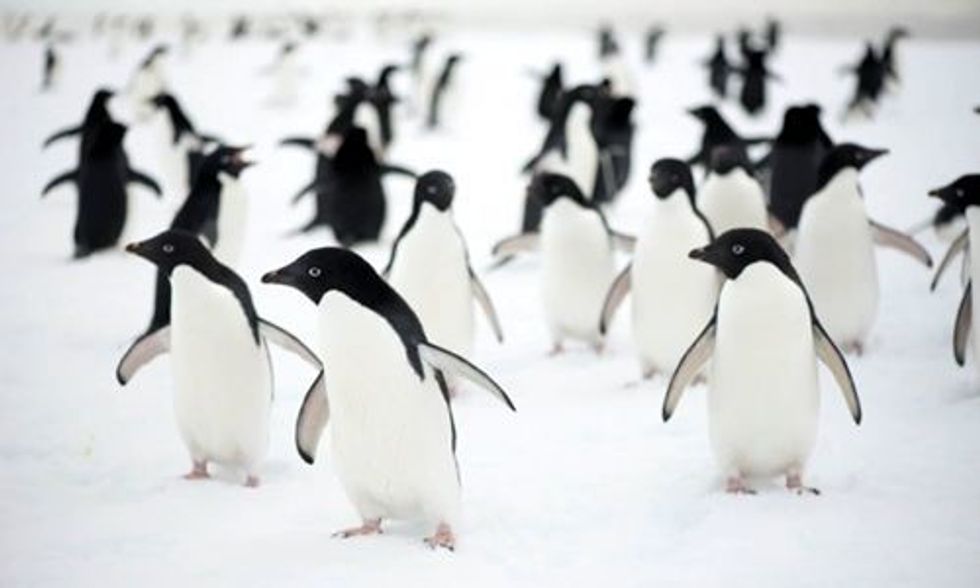 An estimated 150,000 Adélie penguins living in Cape Denison, Antarctica, have died after a stranded iceberg became grounded forcing the penguins to travel almost 40 miles in search of food.

According to a new study in Antarctic Science, with the 2011 arrival of the colossal iceberg B09B, sea ice has extended up to 60 km across East Antarctica's Commonwealth Bay, which has had devastating consequences for the Adélie penguin colony.

These Adélie penguins are thriving at the edge of the sea ice, but their fellows are dying when trapped too far from the ocean. Photo credit: Annette Turney / Australasian Antarctic Expedition 2013-14

The giant iceberg, the size of Rome, had apparently been floating close to the coast for 20 years before crashing into a glacier and becoming stuck.

"It's eerily silent now," Chris Turney, professor of climate change and earth sciences at UNSW in Australia and co-author of the study, told the Sydney Morning Herald. "The ones that we saw at Cape Denison were incredibly docile, lethargic, almost unaware of your existence. The ones that are surviving are clearly struggling. They can barely survive themselves, let alone hatch the next generation. We saw lots of dead birds on the ground ... it's just heartbreaking to see.

"They don't migrate. They're stuck there. They're dying."

Lead author Dr. Kerry-Jayne Wilson of the West Coast Penguin Trust told the Sydney Morning Herald that regional changes triggered by the iceberg had led to a "catastrophic breeding failure." She said it was "heart wrenching" to see the impact on the penguins, with researchers walking "amongst thousands of freeze-dried chicks from the previous season and hundreds of abandoned eggs."

According to the researchers, 93 percent of the population is already dead and “the Cape Denison population could be extirpated within 20 years unless B09B relocates or the now perennial fast ice within the bay breaks out.

"This has provided a natural experiment to investigate the impact of iceberg stranding events and sea ice expansion along the East Antarctic coast.”

Watch this video by Intrepid Science to learn more: