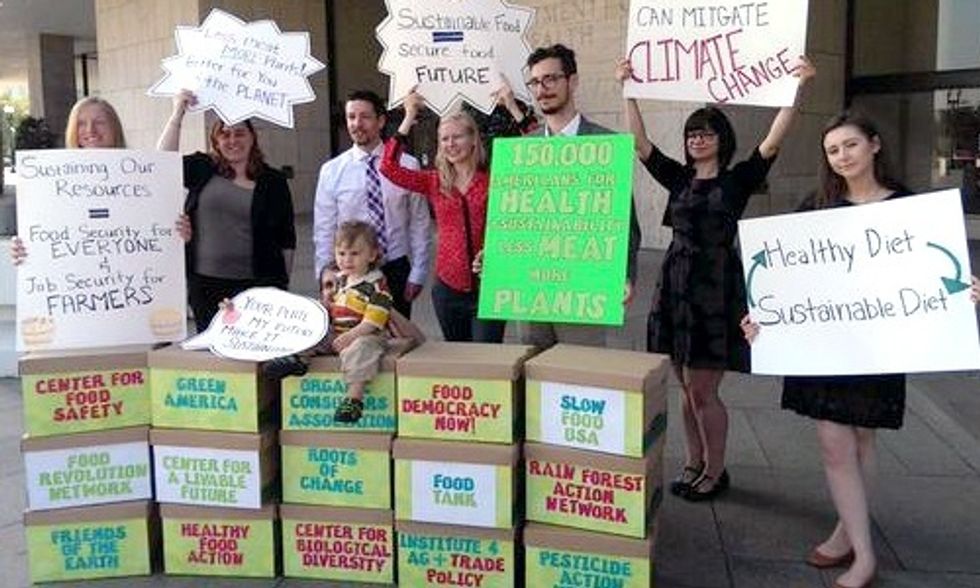 Coalition for less meat, more plants: all set up and ready to deliver petitions to HHS! pic.twitter.com/WiE4TwOqCQ

The petition, led by the Center for Biological Diversity and Friends of the Earth, was supported by more than a dozen environmental, public health and food advocacy organizations as part of a larger effort showing the widespread support among experts and the American public for science-based dietary guidelines that promote health and sustainability. The groups also signed onto a joint statement in favor of the recommendations for less meat and more plant-based foods that originally appeared as a full-page ad in the New York Times and Washington Post, and has now gathered support from more than 150 organizations and experts. “Americans in every corner of the country are moving toward diets that are better for themselves and better for wildlife and our planet, especially by eating less meat,” said Stephanie Feldstein, population and sustainability director at the Center for Biological Diversity. “The choice is clear: In this era of climate change, drought and diet-related health crises, the government should be leading us with dietary guidelines that are healthy and sustainable for us all.”

The guidelines are a government-approved blueprint for healthy diets and are widely used in nutrition education programs and to set the meal plans for government institutions, including schools, prisons, military facilities and federal cafeterias. This year is the first time sustainability considerations were included in the scientific report used to inform the final guidelines.

The message to HHS and USDA this morning: pic.twitter.com/Of9ZMKJEoV

“We hope the administration will stand up for science in the face of intense industry pressure,” said Kari Hamerschlag, food and technology senior program manager at Friends of the Earth. “The science is clear that eating less meat and more plants is better for our health and the health of our planet and future generations. We urge the administration to pay attention to the evidence, as well as the large number of petition signers and public comments in support of the sustainability recommendations.”

“Right now, U.S. farmers are only producing enough vegetables to serve each American 1.6 cups a day—far less than the current dietary recommendations of 2.5 cups a day,” said Alexis Baden Mayer, political director at Organic Consumers Association. “Too much of our crop land is being used to feed animals in factory farms instead of meeting our nutritional needs. That’s not healthy or sustainable. The USDA and HHS need to fix this problem, and they can start by implementing the DGAC’s recommendations.”

In addition to signing the petition, thousands of Americans have submitted comments to the agencies in support of including both health and sustainability in the 2015 dietary guidelines. The Department of Health and Human Services reported receiving “an unprecedented number” of comments this year, with more than 20,000 comments compared to only 1,200 comments during the 2010 dietary guidelines process. The comment period closes on Friday.