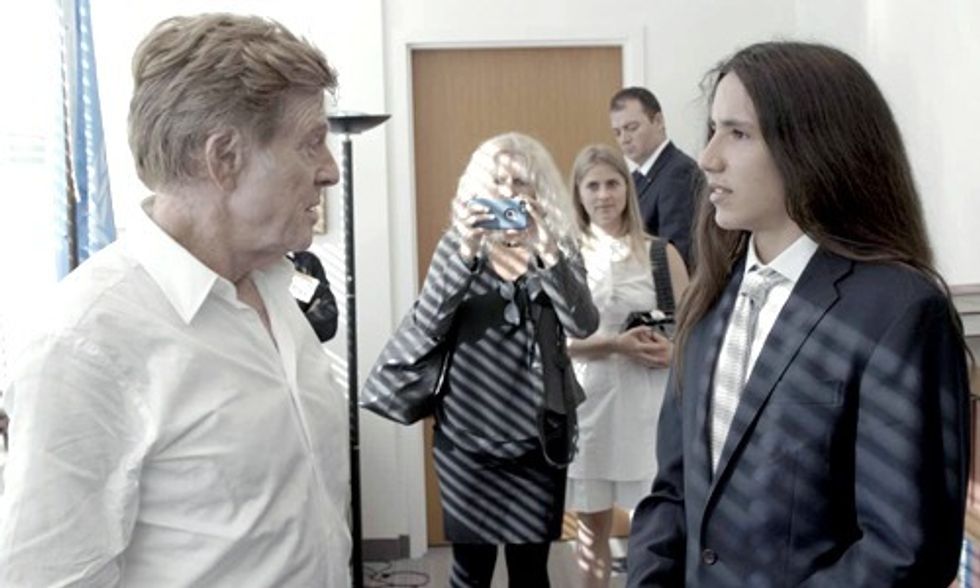 Xiuhtezcatl is the youth director of a non profit organization Earth Guardians. He was raised in the Aztec tradition and has been an active campaigner since the age of six. Now 15, he was selected to speak at the Opening Ceremony from among 200 applicants through a process facilitated by the UN Non-Governmental Liaison Service.

Martinez turned heads at the UN meeting calling on delegates to “dream big.” Saying, "It’s time to look to the skies for the solutions we need, because the future of energy is not down a hole.”

With only five months remaining before the COP 21 UN Climate talks in Paris, Martinez was selected by UN President Sam Kutesa of Uganda to address the assembly as a representative of civil society.

The young activist asked the delegates to imagine what could be accomplished if fossil fuel and nuclear subsides were reinvested into renewable energy. The International Monetary Fund estimates global fossil fuel subsidies are close to $10 million every minute. “The solutions are here, and they are bringing with them millions of jobs and economic opportunity,” he said.

Xiutezcatl emphasized the power of a growing youth climate movement:

“Everywhere young people are rising up and taking action to solve the issues that will be left to our generation … Over 400,000 people marched in through the streets of New York City in the world’s greatest climate march. More than 220 institutions have divested from fossil fuels with the help of student-led movements and the number continues to grow. Youth are suing their state and federal governments across the United States, demanding action on climate change from our elected officials. We are flooding the streets and now we are flooding the courts to get the world to see there is a movement on the rise and we are at the forefront, fighting for the solutions we need.”

Despite the challenging circumstances Xiuhtezcatl urged optimism, calling on delegates to stand with youth leaders.

“In the light of a collapsing world, what better time to be alive than now, because our generation gets to change the course of history," he said. "Humans have created the greatest problem we face today, but the greater the challenge the higher we will rise to meet it. We need you to be a climate leader—not to stand up for us, but to stand with us."

As his speech concluded, Xiuhtezcatl asked, “Who will rise with me now for mine and future generations to inherit a healthy just and sustainable planet?” Many of the delegates symbolically rose from their seats in support of Xiuhtezcatl.

Redford has been a prominent voice in the environmental movement for more than 40 years and is deeply involved in campaigns to protect air, land and water from pollution as a long-time trustee of the Natural Resources Defense Council.

“Robert Redford refuses to leave the next generation a world beyond fixing—because he knows it’s not too late,” said Rhea Suh, president of the Natural Resources Defense Council. “Global momentum is building to combat the gravest environmental threat of our time.”

During his speech, Redford said, “Unless we move quickly away from fossil fuels we are going to destroy the air we breathe, the water we drink and the health of our children, our grandchildren and future generations.”

UN President Sam Kutesa of Uganda shared his gratitude for Redford's work. “Robert Redford has long been giving voice to the underdog, to the people who are trying to do the right thing, and for the environment,” he said. “His presence at the High-Level Event helped us connect with people all around the world who also want to do the right thing on climate change.”