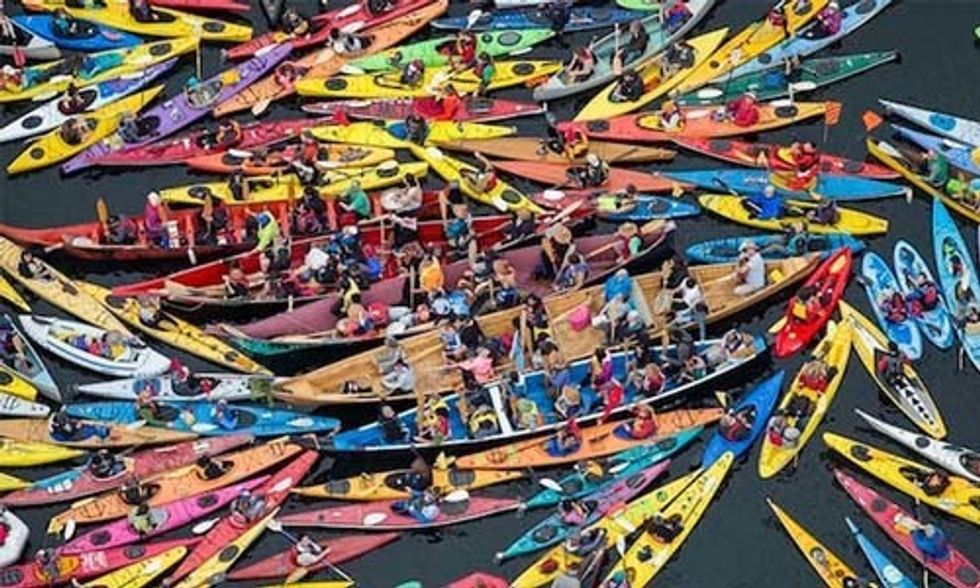 Overfishing, climate change, habitat destruction and pollution remain major threats to the world’s ocean. But amidst all that there is some seriously good ocean conservation news worth celebrating. So, to continue the tradition started last year with listing 14 Ocean Conservation Wins of 2014, here’s a rundown for 2015 that will hopefully fill you with #OceanOptimism. These wins represent the diligent efforts of organizations and individuals too numerous to list, so let’s just start with a blanket shoutout to all of #TeamOcean for a great year.

The Rock Islands in Palau in the Pacific Ocean are a UNESCO World Heritage Site. Photo credit: Matt Rand / The Pew Charitable Trusts

2. New technology is being developed to combat illegal fishing. Designating all these new reserves means little without enforcement, and we can’t enforce unless we know what’s happening out on the water. One big tech effort launched this year is Global Fishing Watch, a partnership between Skytruth, Google and Oceana to track fishing vessels and identify illegal fishing. Another similar program is the Pew Charitable Trust’s Virtual Watch Room. These technologies are in prototype phase and need significant improvement before they live up to expectations, but it’s a promising and exciting development.

3. Illegal fishing boats are being chased down and caught! Sea Shepherd chased a pirate fishing boat on Interpol’s most wanted list for 10,000 miles, until the boat sank (potentially on purpose to drown the evidence of illegal fishing). Another boat was chased for four days, caught, and fined $2 million for illegally fishing in the Phoenix Islands Protected Area. The Black Fish and Environmental Justice Foundation have also been stepping up to make sure enforcement happens, but hopefully we can soon rely on law enforcement organizations, not environmental groups, to do this work.

4. Ocean conservation is one of the UN’s new sustainable development goals. These goals set the UN’s agenda for the next 15 years, and it wasn’t clear the ocean would make the cut, but (voila!) Goal 14 is to “Conserve and sustainably use the oceans, seas and marine resources.” Specific targets include, by 2020, conserving 10 percent of the ocean (but see #1 above for how far we have to go and whether 10 percent is even enough), halting overfishing and illegal fishing, and ending the subsidies that encourage them. Addressing marine pollution and ocean acidification, and supporting small island states and small-scale artisanal fisheries are also priorities.

5. The Port State Measures Agreement is close to being ratified. Another one from the UN, this is an agreement aiming to “to prevent, deter and eliminate illegal, unreported and unregulated (IUU) fishing through the implementation of robust port State measures.” In other words, boats have to come into port eventually, so it’s important to have international cooperation in place to prosecute the bad guys when they come ashore. IUU fishing is a major issue, representing ~$20 billion annually, and this measure will greatly increase enforcement capacity. The agreement will enter into force after 25 countries ratify it—nine more ratifications to go, all expected in 2016.

6. The ocean is getting some good ink and screen time. Racing Extinction premiered in theaters, bringing the issues of trade in endangered species, overfishing and ocean acidification to the big screen. The Discovery Channel promised to stop with all the fear-mongering and straight up fake documentaries during Shark Week. Richard Branson’s philanthropy launched Ocean Unite, to pull together and support the ocean conservation community on communications. And see #6 below.

7. Sustainable fishing became understood as a human rights issue. Reporter Ian Urbina produced a slew of impressive investigative articles exposing the widespread human trafficking, slave labor and other horrors associated with major fisheries. Upworthy produced a series of pieces to get this info to a broader audience. Greenpeace has been fighting for fishers’ rights, teaming up with five of the largest labor unions. The “Statement of Solidarity With Greenpeace Campaign to Reform the Tuna Industry” begins: “We know that environmental and social justice issues are absolutely intertwined and increasingly solutions that protect workers are the same solutions that safeguard the environment and natural resources.” Hear, hear! And if you eat shrimp, unless you’re paying like $20 a pound, it’s totally unsustainable and slaves probably peeled it for you, so please find something else to dip in cocktail sauce.

8. Small island states are leading the way and getting support on ocean management. Not only did small island states come together as a powerful voice at COP 21 in Paris, this year also saw the launch of Blue Guardians at the Clinton Global Initiative. This new partnership that includes a broad collaboration of organizations (SIDS DOCK, Digital Globe, The Nature Conservancy, World Bank, Clinton Climate Initiative, Waitt Institute and others), and is focused on simultaneously protecting oceans and supporting coastal economies in the context of a changing climate.

9. A nonpartisan coalition is bringing ocean issues into the 2016 U.S. elections. The Sea Party Coalition was launched by Blue Frontier, with tea party and liberal Congressmen, environmental NGOs, an evangelical minister, climate activists, ocean scientists and philanthropists participating. The hope is to use the crosscutting sentiments for ocean conservation and against offshore drilling to get some traction for ocean issues in the 2016 elections.

10. Anonymous is hacking for ocean conservation. The hacking collective claims credit for shutting down government websites of Japan and Iceland in retribution for their whaling. Both countries continue to kill whales via a loophole in the International Whaling Commission agreement that allows whaling for “scientific research.”

11. Oil companies may be giving up on drilling in the Arctic. Greenpeace activists suspended themselves from a Portland bridge for two days attempting to block a Royal Dutch Shell icebreaker from heading to the Arctic. This year also saw the rise of “kayaktivists” forming barriers to oil drilling equipment leaving port in Portland and Seattle. Shell has at least temporarily ceased oil exploration in Alaska, and, though the fight isn’t over, the Obama administration has put a two-year ban on drilling there. Greenpeace has shared the inside story of the #ShellNo protests in “People vs. Shell.”

Activists participate in the sHell No Flotilla part of the Paddle In Seattle protest. Nearly a thousand people from country gathered May 16, in Seattle's Elliot Bay for a family-friendly festival and on-land rally to protest against Shell’s Arctic drilling plans. Photo credit: Greenpeace

12. Ocean zoning continues to gain traction as a key policy approach. The Waitt Institute’s zoning-focused Blue Halo Initiative has been scaled up from the pilot project in Barbuda to launch two new partnerships, with the governments of Montserrat and Curaçao. Perhaps more importantly, at least a dozen other island nations are interested in developing similar comprehensive, science-based, community-driven sustainable ocean management plans for their waters.

13. Plastic microbeads are getting banned. New research shows that there are at least 15 trillion pieces of plastic in the ocean, at least three times more than previously thought. Plastic microbeads, the sneakiest tiny bits of plastic, are in all sorts of toiletries (like face scrubs and toothpaste). They end up in the ocean in droves, then in creatures’ bellies and gills, and cause all sorts of problems. The good news is the U.S. Senate and House of Representatives have passed bills that will ban the use of microbeads. Fear not!—there are plenty of non-plastic, non-toxic ways to exfoliate.

14. An end to subsidies for unsustainable fishing is gaining steam. Much of the world’s overfishing and illegal fishing is financed by government subsidies. But now, in a WTO Ministerial Statement, 27 countries have committed to ending subsidies “that negatively affect overfished fish stocks” or that support IUU fishing. This is also a target of the UN’s new ocean goal (see #2 above).

15. The COP 21 climate agreement mentioned the ocean. Given that the ocean is the majority of the planet and a lynchpin of the climate system and carbon cycle, it’s a bit nutty that just getting the ocean mentioned was something we needed to fight for. However, the ocean was not originally included in the agreement’s text, and it is due to strong collective presence of the ocean community at COP 21 that the ocean got mentions in the final document. Yet, note this analysis of how the agreement is not nearly as lovely, equitable, and transformative as most reporting would have you believe, and that it’s certainly insufficient for saving coral reefs.

Other good oceany things happened this year too. The U.S. and Cuba agreed to collaborate on management of marine protected areas. XPrize launched a $7 million ocean exploration prize competition. Adidas and Parley teamed up to launch 3-D printed shoes made of plastic ocean trash. World leaders gathered at the Our Ocean conference, which is becoming a key annual diplomatic event. Citizen science is on the rise. And Atlantic salmon just spawned in Connecticutfor the first time since the 1700s. There are invariably other wins I’ve missed—please shout them out in the comments!

If this trend of ocean wins from last year and this year continues, we may well avoid the most dire predictions of ocean ecosystem collapse. To maintain this positive inertia, we must keep coming together and collaborating, and draw others into the fold to ensure (as we say at the Waitt Institute) sustainable, profitable and enjoyable use of the ocean for this and future generations. Hopefully 2016 will be the year of really coming to grips with how to use the ocean without using it up. Happy new year!