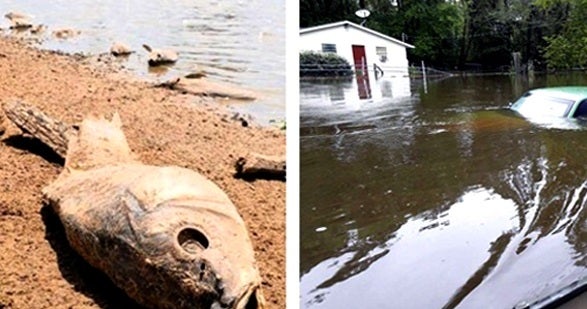 Scientists are already all but certain that 2015 will be the hottest year on record, surpassing the previous record, which was set just last year. The last five years make up the hottest five-year period on record and 13 of the 14 hottest years on record all occurred this century.

South Carolina flooding is the type of event climate scientists have warned about for years https://t.co/DNM7Ya1Hz4 pic.twitter.com/rFz7z2hXiC

The world marked some other unprecedented milestones in modern history this year. Greenhouse gas concentrations surpassed 400 parts per million (ppm) for an entire month this past spring. “We will soon be living with globally averaged carbon dioxide levels above 400 parts per million as a permanent reality,” World Meteorological Organization Secretary-General Michel Jarraud said last month.

This year is also the first time global mean temperature at the Earth’s surface is set to reach 1 degree Celsius above pre-industrial levels.

The scientific community holds that we must keep global greenhouse gas concentrations below 350 ppm and warming below 2 degrees Celsius above pre-industrial levels to avoid the most catastrophic effects of climate change.

All of that extreme heat has resulted in some very extreme weather. Heat waves gripped Europe, North Africa, Asia and the Middle East in the spring and summer of 2015. India and Pakistan in particular saw deadly heat waves. And many places experienced unusual rainfall patterns.

And scientists are already predicting 2016 is likely to be even hotter than 2015.

Watch this video from Climate Nexus to see some of the most extreme weather of 2015:

Will This Christmas Be the Warmest of Your Lifetime?