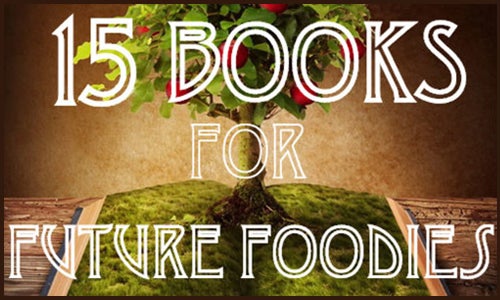 Thanks to The Food Think Tank for providing this comprehensive list of books that teach kids ways to create a better food system. 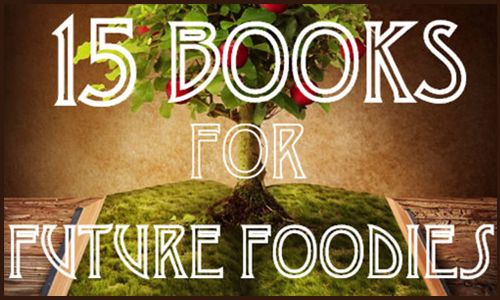 1. Lidia’s Family Kitchen: Nonna’s Birthday Surprise by Lidia Bastianich
Nonna Lidia is responsible for planning the menu for a birthday surprise feast for Nonna Mima. Through the course of the evening’s preparations, Nonna Lidia reminisces about her youth on the farm where she grew her own fruits and vegetables. The book includes 18 recipes featuring ingredients that are abundant during each season and suggestions for including kids in meal preparation.

2. Green Smoothie Magic by Victoria Boutenko
Young Nic is an inquisitive child with a fondness for magic. Nic learns from his father about the “magical green juice,” called chlorophyll, that helps to power the growth of plants and trees. Eager to grow as big and strong as the oak trees that fascinate him, Nic determines to eat more vegetables and he is challenged by the bitter taste of greens to come up with a raw-food green smoothie that makes vegetables taste as good as they are for his health.

3. How Did That Get in my Lunchbox?: The Story of Food by Chris Butterworth
Readers are presented with an engaging examination of how some of the most common foods that they eat are produced and eventually make their way into their lunchboxes.

4. In the Garden with Dr. Carver by Susan Grigsby
In the early 1900s, many rural Alabama communities were struggling to produce food from soil that was drained of its nutrients because of cotton production. In the book, Dr. George Washington Carver arrives to help the farms and school garden in the community grow food again.

5. First Peas to the Table: How Thomas Jefferson Inspired a School Garden by Susan Grigby
Maya is excited to participate in the planting of a school garden and her school’s “First Peas to Table” contest. With help and inspiration from Thomas Jefferson’s Garden Book, Maya plants pea seeds while keeping track of their progress in her garden journal.

6. Grow Your Own! by Esther Hall
Sidney and his mom live a busy city life, where meals come mainly from the microwave. Not the most avid eater of vegetables, Sidney’s outlook toward eating greens changes after a visit to is grandmother in the country.

7. Molly’s Organic Farm by Carol L. Malnor
Molly the cat, a curious wanderer, finds herself in an organic farm one day, where she plays, rests, and hunts among the vegetables. As she becomes a regular visitor in the garden, Molly witnesses the interplay of natural forces that come together to produce organic, healthy food

8. Farmer Will Allen and the Growing Table by Jacqueline Briggs Martin
Farmer Will Allen, a former basketball star, sees an opportunity to turn an  abandoned city lot into a table big enough to feed the whole world. Through hard work and creativity, he transforms a barren urban space with poor soil into a flourishing source of nutrition for the community.

9. To Market, To Market by Nikki McClure
A mother and son go to the weekly farmers’ market where they make their way through their grocery list. As they travel through the market, they learn how each food they come across was grown or produced.

10. The Good Garden by Katie Smith Milway
Eleven-year-old María Luz and her family struggle with poor conditions on their small farm, forcing her father to leave home to find work. A new teacher at María’s school introduces her to sustainable farming practices that she begins to implement in the garden at home. Through using these techniques, Maria gets better yields, allowing her family to rid themselves of the middlemen who previously took most of their profits.

​Sylvia, a picky eater who hates eating spinach, discovers the joy of growing food in a garden. Sylvia also learns to love the spinach she once hated and the joy of trying new foods.

12. My Mom Eats Tofu by Robyn Ringgold
In this book, a girl named Summer explains to her friends about her mother’s environmentally sustainable eating habits, including growing her own food, eating organically, and composting.

13. The Mangrove Tree: Planting Trees to Feed Families by Susan L. Roth
The people of the village Hargigo in the country of Eritrea once struggled to grow enough food for themselves and their animals. Their homes were built on desert land near a large body of saltwater–the Red Sea. Doctor Gordon Sato, a Japanese American cell biologist, helps them change their lives by planting trees that made the most productive use of the arid land.

14. Our School Garden by Rick Swann
New-kid-on-the-block Michael witnesses the changing seasons at the school garden, where he discovers not just how vegetables grow, but how a community can start and nurture a garden.

15. Farmers Market Day by Shanda Trent
An enthusiastic little girl makes a bit of a mess as she explores the colors and textures of all the food at the farmers’ market on her quest to find the perfect treat.