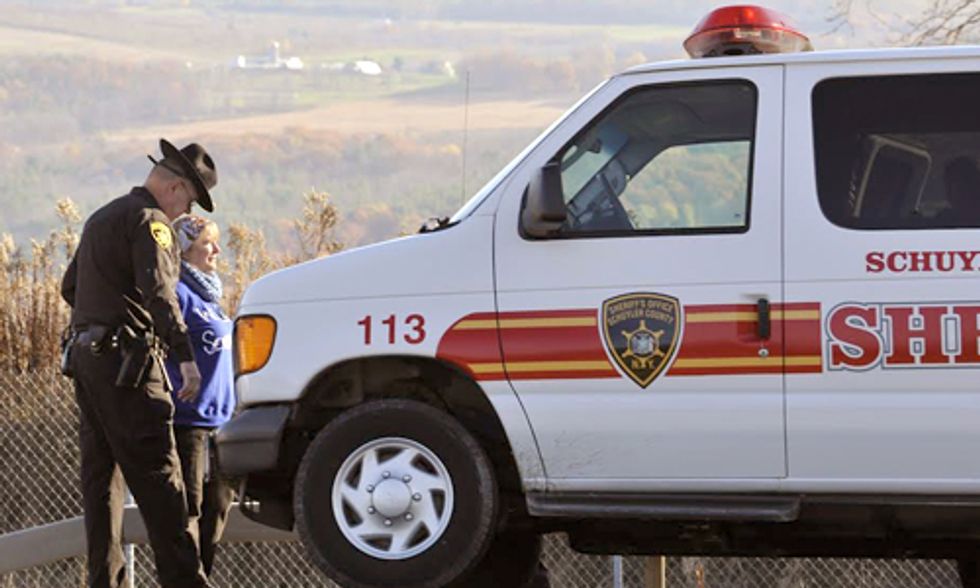 Fifteen people were arrested this morning blockading the gates of Texas-based Crestwood Midstream’s gas storage facility on the shore of New York's Seneca Lake. This action marks the beginning of the third week of protests trying to stop major new construction on the gas storage facility authorized by the Federal Energy Regulatory Commission (FERC).

“We’re standing on what used to be a part of my legislative district in Schuyler County. I am embarrassed and saddened to see what is going on here, I’m sad to see that some of the people in this district are actually supporting this endeavor to store gas in a very unstable salt formation,” said Ruth Young of Horseheads, a former member of the Schuyler County legislature and among those arrested today.

On Oct. 29, 10 people were arrested blockading two gates into Crestwood. On Oct. 24, more than 200 people attended a rally at the Crestwood gate as part of the "WE ARE SENECA LAKE" protests.

“I’m worried about water quality, there are severe salinity problems already, and I’m almost certain those will get worse because we think the existing problems are caused by gas storage started in 1964." said John Dennis, PhD, of Lansing, New York who was arrested today.

According to the organizers of these protests, the methane gas storage expansion project is advancing in the face of broad public opposition and unresolved questions about geological instabilities, fault lines and possible salinization of the lake, which serves as a source of drinking water for 100,000 people. They say these protests are a "call on President Obama, U.S. Senators Schumer and Gillibrand, Governor Cuomo and Congressman Reed to intervene on behalf of the community and halt the dangerous project."

"Our elected officials have let us down, so we have to take matters into our own hands. I love Seneca Lake, I love this area," said Lyn Gerry of Watkins Glen, a radio host in Schuyler County who was arrested today. "I’m not from here originally, I’ve traveled 3,000 miles to come to this beautiful place by this beautiful lake to live, and I’ve come from a place that greed has already destroyed. So I know what a land being destroyed looks like. So now, my back is to the wall and I must defend what I love.”

The ten protesters that were arrested last week will be arraigned on Nov. 5 at 6 p.m. at the Reading Town Hall, 3914 County Rt. 28, Watkins Glen in New York.