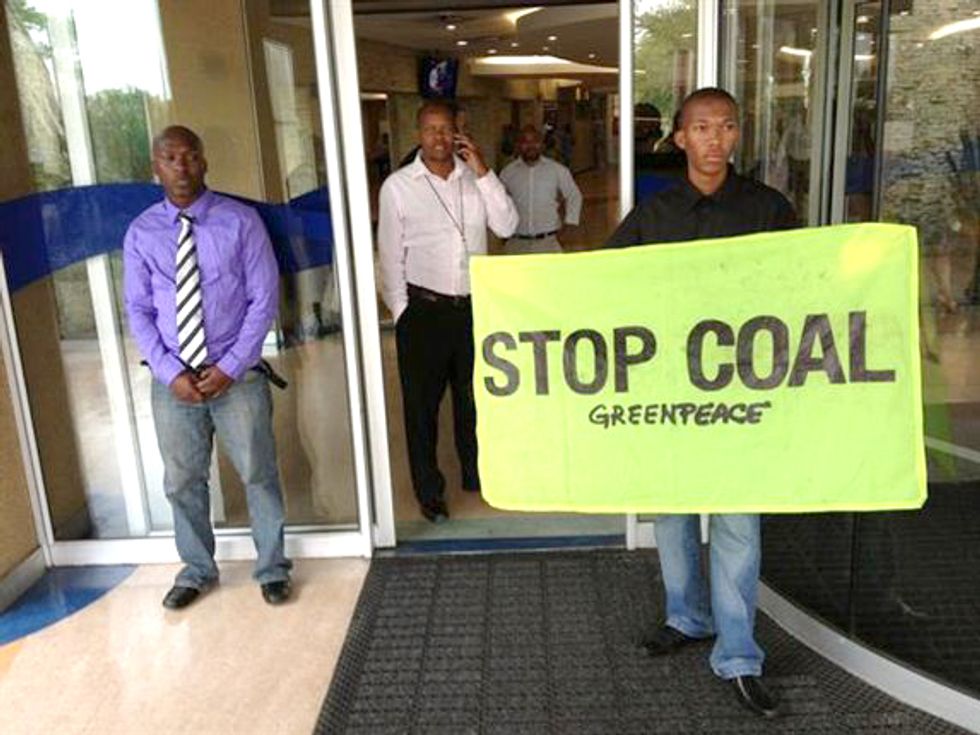 Fourteen activists including groundWork's Bobby Peek, Earthlife's Makoma Lekalakala and Greenpeace Africa's Melita Steele have been arrested while protesting at the Eskom megawatt park. Today, three campaigning organizations joined forces to put South Africa’s energy utility, Eskom, under "new management." Activists confronted the utility to publicly highlight that Eskom has failed to deliver clean, affordable, accessible electricity to the people of this country, and demand a shift away from coal. The organizations installed "new management" members Bobby Peek1 as the new Eskom CEO, Makoma Lekalakala2 as the new Eskom stakeholder engagement director and Melita Steele3 as the new Eskom spokesperson.

At dawn, Greenpeace activists dropped a banner at Eskom’s Megawatt Park headquarters reading "Eskom: Under New Management." At the same time, activists locked themselves to the front entrance of the building, and the "new management" members have chained themselves to a table outside the building as part of the protest.

The protest at Megawatt Park comes in the wake of Eskom’s announcement of further electricity price hikes to pay for new coal-fired power stations.

“We are here today because Eskom has clearly failed the people of South Africa, and we are united in calling for a fundamental shift away from coal by Eskom. Whilst government pumps billions into developing new Eskom coal-fired power stations to power industry, community people’s health is increasingly affected by the toxic by-products of coal from industries. This happens during each step of the coal to energy lifecycle. Those exposed to this constant air pollution suffer from chronic respiratory conditions, such as bronchitis and pneumonia” said groundWork director and incumbent Eskom CEO, Bobby Peek.

The "new management" members pledge to put the  people of this country first, recognizing that new coal-fired power stations damage people’s health, use up scarce water supplies and do not deliver affordable, accessible electricity to all South Africans.

According to Melita Steele, Greenpeace Africa’s climate and energy campaigner, who now takes over as Eskom’s "new spokesperson," “Water plays a critical role in poverty alleviation and development. However, at the moment Eskom is holding our water resources hostage by burning coal to produce electricity—using staggering amounts of the scarce resource,4 and pushing this country to the brink of a water crisis.5 The reality is that Eskom needs to shift away from coal in a just transition to safeguard South Africa’s future. There are effective alternatives to coal, but there is no substitute for water."

“Eskom’s electricity tariff hikes are going to pay for more coal-fired electricity generation that puts all South Africans at risk. It is this country’s most impoverished who have to pay the real costs of coal: unaffordable, dirty electricity,  while BHP Biliton still gets electricity below cost—and the poor have to subsidize ESKOM’s loss of R5.5. billion. It is time for Eskom to deliver clean, affordable, accessible electricity to everybody in this country” said Makoma Lekalakala of Earthlife Africa JHB and Eskom’s "new stakeholder engagement director."

Greenpeace activists snuck into Eskom Megawatt Park in Johannesburg to stage a protest against Eskom's use of coal and water. (Yusuf Omar, Twitter)

According to the "new management" team, they are prepared to end their protest once they are invited into Megawatt Park to formally take over as Eskom’s official "new management."

From today, Eskom’s "new management" will listen to all South Africans, and finally put the people of this country first by: