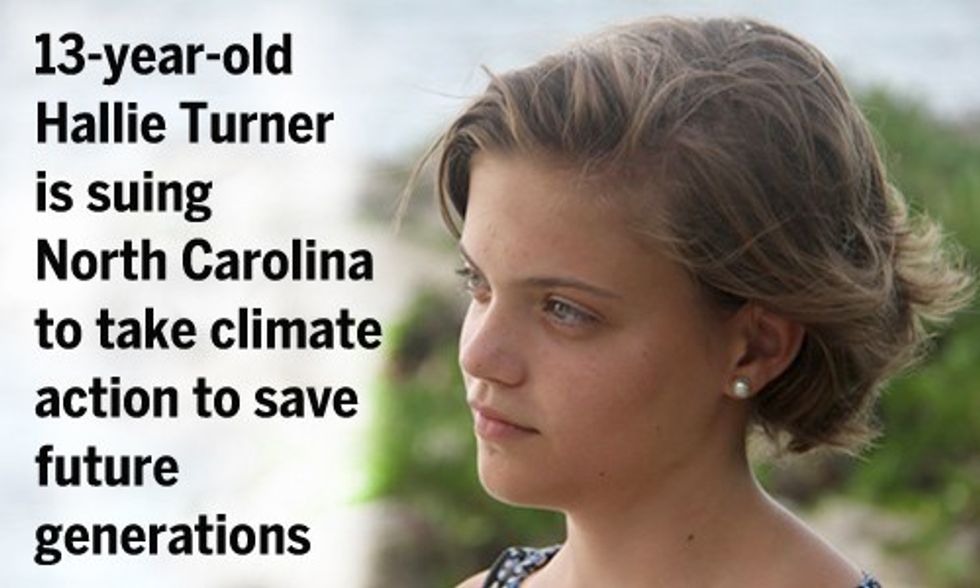 Many young people, such as 13-year-old Hallie Turner, are worried that their generation will have to deal with the most intense consequences of unchecked climate change. That's why Turner, an eighth-grader in North Carolina, is one of a number of young people across the country who is suing her state over its failure to address climate change.

Turner's case is being brought forth by the help of Our Children's Trust, an Oregon-based climate change nonprofit that has helped youth around the country file lawsuits at the state level and is also helping 21 young people sue President Obama and the federal government for violating the youngest generation’s constitutional rights to life, liberty and property by not addressing climate change. Attorneys from Duke University’s Environmental Law and Policy Clinic and Gayle Tuch, a Forsyth County lawyer, are also representing Turner.

“It’s important to me because I feel like this is an issue that impacts everyone,” Turner told The News Tribune. “And it’s an issue, it’s not only affecting me, but it’s affecting future generations.”

She's challenging a decision made last year by the state's Environmental Management Commission and pushing for the state to mandate that North Carolina reduce its carbon emissions by at least four percent each year. “Hallie’s not asking for more than what’s considered best available science,” said attorney Tuch.

The state's Commissioner Benne Hutson rejected Turner's petition, "not on its merits" but because it was "incomplete," according to the News Tribune. Hutson also cited the fact that "North Carolina law prohibited environmental agencies from enacting state laws that were stricter than federal law."

Turner, however, is undeterred. “I feel like my voice needs to be heard,” Turner told reporters inside the courthouse on Friday. “I haven’t really ever let my age get in the way of it. There are definitely people who are like, ‘You’re a kid. What do you know?’ and that was always the frustrating thing for me.”

The judge said he hoped to have a ruling by Thanksgiving. If the court rules against her, Turner said, “I’m going to keep fighting.”

This is not Turner's first fight calling for a healthier planet. After reading Al Gore's An Inconvenient Truth when she was nine, Turner was inspired to take action. She serves on the leadership council of the iMatter Youth Movement, has attended rallies and marches in her state and Washington, DC, and even spoke at the Climate Convergence on Raleigh in 2013.

Turner's lawsuit is timely given that the U.S. Environmental Protection Agency (EPA) has "put state officials on notice" that North Carolina is at risk of losing its regulatory authority for industrial air and water pollution, says Winston-Salem Journal.

The letter mentioned court challenges, brought by two environmental organizations and backed by the Southern Environmental Law Center, over permits issued for a proposed cement plant near Wilmington and a limestone quarry on Blounts Creek near Vanceboro.

The EPA regional administrator stated that court rulings prohibiting the groups from seeking judicial review of the permits “cast serious doubt” on whether North Carolina meets minimum federal requirements to protect its residents from environmental pollution."

If the federal government were to follow through, the North Carolina Department of Environmental Quality (DEQ) would be stripped of its duties to issue industrial air and water permits. “We believe the EPA misunderstands the legal argument made in this case,” said agency spokesperson Crystal Feldman.

“We have no intention of losing that authority,” Feldman added. “DEQ fully supports citizen access to judicial review and is working to alleviate EPA’s misunderstanding about the law.”

Mark Ruffalo Is ‘Burning Up’