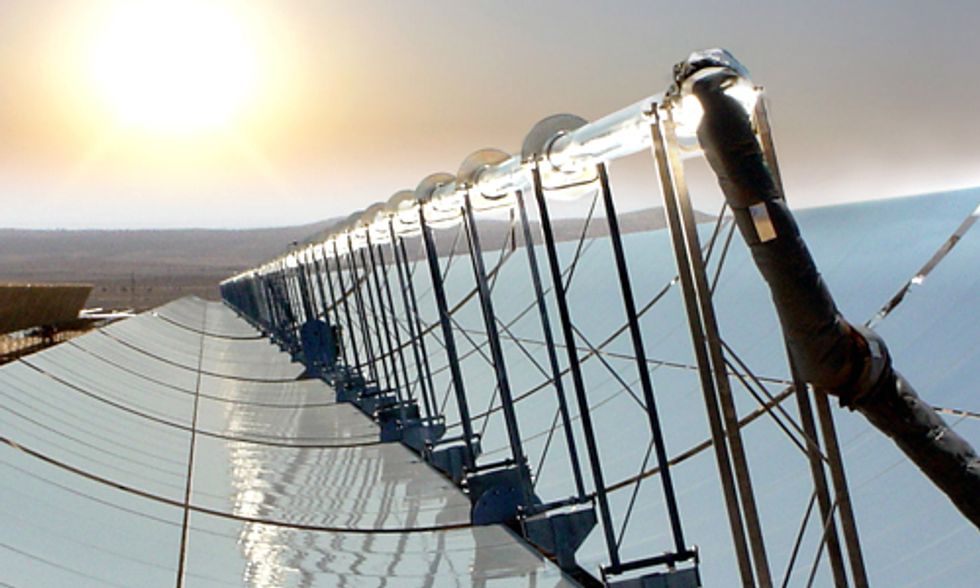 By Kiley Kroh and Jeff Spross

While the news about climate change seems to get worse every day, the rapidly improving technology, declining costs and increasing accessibility of clean energy is the true bright spot in the march toward a zero-carbon future. The year had more clean energy milestones than we could fit on one page, but here are 13 of the key breakthroughs that happened in 2013.

1. Using salt to keep producing solar power even when the sun goes down.

Helped along by the Department of Energy’s loan program, Solana’s massive 280 megawatt (MW) solar plant came online in Arizona this October, with one unique distinction: the plant will use a ‘salt battery’ that will allow it to keep generating electricity even when the sun isn’t shining. Not only is this a first for the U.S. in terms of thermal energy storage, the Solana plant is also the largest in the world to use to use parabolic trough mirrors to concentrate solar energy.

Nissan recently finished a field test to see if a new system could power an office building from the LEAF electric vehicle’s battery. Photo credit: Nissan

Nissan’s groundbreaking ‘Vehicle-To-Building‘ technology will enable companies to regulate their electricity needs by tapping into electric vehicles (EVs) plugged into their garages during times of peak demand. Then, when demand is low, electricity flows back to the vehicles, ensuring they’re charged for the drive home. With Nissan’s system, up to six electric vehicles can be plugged into a building at one time. As more forms of renewable energy are added to the grid, storage innovations like this will help them all work together to provide reliable power.

3. The next generation of wind turbines is a gamechanger. May of 2013 brought the arrival of GE’s Brilliant line of wind turbines, which bring two technologies within the turbines to address storage and intermittency concerns. An “industrial internet” communicates with grid operators to predict wind availability and power needs, and to optimally position the turbine. Grid-scale batteries built into the turbines store power when the wind is blowing. That energy can be fed into the grid as demand comes along, smoothing out fluctuations in electricity supply. It’s a more efficient solution to demand peaks than fossil fuel plants, making it attractive even from a purely business aspect. Fifty-nine of the turbines are headed for Michigan, and two more will arrive in Texas.

4. Solar electricity hits grid parity with coal. A single solar photovoltaic (PV) cell cost $76.67 per watt back in 1977, then fell off a cliff. Bloomberg Energy Finance forecast the price would reach $0.74 per watt in 2013 and as of the first quarter of this year, they were actually selling for $0.64 per watt. That cuts down on solar’s installation costs—and since the sunlight is free, lower installation costs mean lower electricity prices. And in 2013, they hit grid parity with coal: in February, a southwestern utility, agreed to purchase electricity from a New Mexico solar project for less than the going rate for a new coal plant. Unsubsidized solar power reached grid parity in countries such as Italy and India. And solar installations have boomed worldwide and here in America, as the lower module costs have driven down installation prices.

5. Advancing renewable energy from ocean waves. With the nation’s first commercial, grid-connected underwater tidal turbinesuccessfully generating renewable energy off the coast of Maine for a year, the Ocean Renewable Power Company (ORPC) has its sights set on big growth. The project has invested more than $21 million into the Maine economy and an environmental assessment in March found no detrimental impact on the marine environment. With help from the Department of Energy, the project is set to deploy two more devices in 2014. In November, ORPC was chosen to manage a wave-energy conversion project in remote Yakutat, Alaska. And a Japanese delegation visited the project this year as the country seeks to produce 30 percent of its total power offshore by 2030.

This year saw the announcement of Carnegie Wave Energy’s upcoming desalination plant near Perth, Australia. It will use the company’s underwater buoy technology to harness ocean wave force to pressurize the water, cutting out the fossil-fuel-powered electric pumps that usually force water through the membrane in the desalination process. The resulting system—“a world first”—will be carbon-free, and efficient in terms of both energy and cost. Plan details were completed in October, the manufacturing contract was awarded in November, and when it’s done, the plant will supply 55 billion litters of fresh drinking water per year.

7. Ultra-thin solar cells that break efficiency records. Conversion efficiency is the amount of light hitting the solar cell that’s actually changed into electricity, and it’s typically 18.7 percent and 24 percent. But Alta Devices, a Silicon Valley solar manufacturer, set a new record of 30.8 percent conversion efficiency this year. Its method is more expensive, but the result is a durable and extremely thin solar cell that can generate a lot of electricity from a small surface area. That makes Alta’s cells perfect for small and portable electronic devices like smartphones and tablets, and the company is in discussions to apply them to mobile phones, smoke detectors, door alarms, computer watches, remote controls and more.

8. Batteries that are safer, lighter, and store more power. Abundant and cost-effective storage technology will be crucial for a clean energy economy—no where more so than with electric cars. But right now batteries don’t always hold enough charge to power automobiles for extended periods, and they add significantly to bulk and cost. But at the start of 2013, researchers at Oak Ridge National Laboratory successfully demonstrated a new lithium-ion battery technology that can store far more power in a much smaller size, and that’s safer and less prone to shorts. They used nanotechnology to create an electrolyte that’s solid, ultra-thin, and porous, and they also combined the approach with lithium-sulfur battery technology, which could further enhance cost-effectiveness.

Statoli is working on what will be the largest floating wind farm in the world off the coast of Scotland. Photo credit: Statoli

Offshore areas are prime real estate for wind farms, but standard turbines require lots of construction and are limited to waters 60 meters deep or less. But Statoil, the Norwegian-based oil and gas company, began work this year on a hub of floating wind turbines off the coast of Scotland. The turbines merely require a few cables to keep them anchored, and can be placed in water up to 700 meters. That could vastly expand the amount of economically practical offshore wind power. The hub off Scotland will be the largest floating wind farm in the world—and two floating turbines are planned off the coast of Fukushima, Japan, along with the world’s first floating electrical substation.

Alternating current (AC), rather than direct current (DC) is the dominant standard for electricity use. But DC current has its own advantages: its cheap, efficient, works better with solar panels and wind turbines, and doesn’t require adaptors that waste energy as heat. Facebook, JPMorgan, Sprint, Boeing, and Bank of America have all built datacenters that rely on DC power, since DC-powered datacenters are 20 percent more efficient, cost 30 percent less, and require 25 to 40 percent less floorspace. On the residential level, new USB technology will soon be able to deliver 100 watts of power, spreading DC power to ever more low voltage personal electronics, and saving homes inefficiency costs in their electricity bill.

11. Commercial production of clean energy from plant waste is finally here. Ethanol derived from corn, once held up as a climate-friendly alternative to gasoline, is under increasing fire. Many experts believe it drives up food prices, and studies disagree on whether it actually releases any less carbon dioxide when its full life cycle is accounted for. Cellulosic biofuels, promise to get around those hurdles, and 2013 may be when the industry finally turned the corner. INOES Bio’s cellulosic ethanol plant in Florida and KiOR’s cellulosic plant in Mississippi began commercial production this year. Two more cellulosic plants are headed for Iowa, and yet another’s being constructed in Kansas. The industry says 2014′s proposed cellulosic fuel mandate of 17 million gallons will be easily met.

12. Innovative financing bringing clean energy to more people. In Washington D.C., the first ever property-assessed clean energy (PACE) project allows investments in efficiency and renewables to be repaid through a special tax levied on the property, which lowers the risk for owners. Crowdfunding for clean energy projects made major strides bringing decentralized renewable energy to more people—particularly the world’s poor—and Solar Mosaic is pioneering crowdfunding to pool community investments in solar in the United States. California figured out how to allow customers who aren’t property owners or who don’t have a suitable roof for solar—that’s 75 percent of the state—to nonetheless purchase up to 100 percent clean energy for their home or business. Minnesota advanced its community solar gardens program, modeled after Colorado’s successful initiative. And Washington, DC voted to bring in virtual net metering, which allows people to buy a portion of a larger solar or wind project, and then have their portion of the electricity sold or credited back to the grid on their behalf, reducing the bill.

13. Wind power is now competitive with fossil fuels. “We’re now seeing power agreements being signed with wind farms at as low as $25 per megawatt-hour,” Stephen Byrd, Morgan Stanley’s Head of North American Equity Research for Power & Utilities and Clean Energy, told the Columbia Energy Symposium in late November. Byrd explained that wind’s ongoing variable costs are negligible, which means an owner can bring down the cost of power purchase agreements by spreading the up-front investment over as many units as possible. As a result, larger wind farms in the Midwest are confronting coal plants in the Powder River Basin with “fairly vicious competition.” And even without the production tax credit, wind can still undercut many natural gas plants. A clear sign of its viability, wind power currently meets 25 percent of Iowa’s energy needs and is projected to reach a whopping 50 percent by 2018.