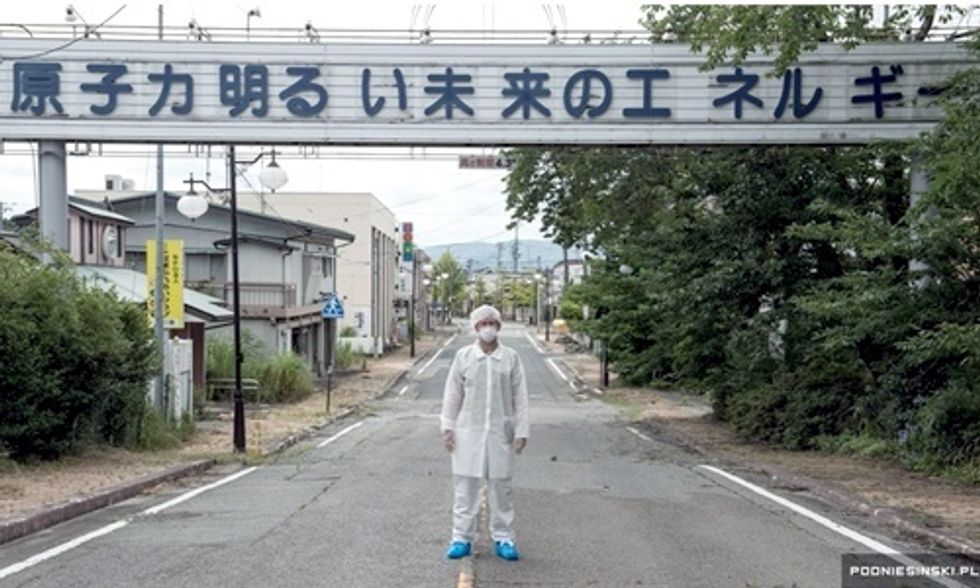 Seven years after visiting Chernobyl for the first time, photographer and filmmaker Arkadiusz Podniesiński went to Fukushima to see how the cleanup process was going and to see how it compared to Chernobyl. Podniesiński notes that the two disasters have a lot in common.

"It is not earthquakes or tsunami[s] that are to blame for the disaster at the Fukushima Daiichi nuclear power station, but humans," he says. "The report produced by the Japanese parliamentary committee investigating the disaster leaves no doubt about this. The disaster could have been forseen and prevented. As in the Chernobyl case, it was a human, not technology, that was mainly responsible for the disaster."

Four years after the Fukushima Disaster, "more than 120,000 people are still not able to return to their homes, and many of them are still living in temporary accommodation specially built for them," says Podniesiński. "As with Chernobyl, some residents defied the order to evacuate and returned to their homes shortly after the disaster. Some never left."

The area is divided up into three zones: red, orange and green with red being the worst. The levels of radiation are so high in the red zone that it's uncertain whether residents will ever be able to return. The orange zone is less contaminated but still uninhabitable. There, residents are allowed to return to their homes during the day but are still not allowed to live in them. The green zone is in the final stages of its clean up and residents will soon be able to live there permanently.

The scale of the decontamination work is vast. "Twenty thousand workers are painstakingly cleaning every piece of soil," says Podniesiński. "They are removing the top, most contaminated layer of soil and putting it into sacks, to be taken to one of several thousand dump sites. The sacks are everywhere. They are becoming a permanent part of the Fukushima landscape."

The walls and roofs of all of the houses and buildings in the area are being "sprayed and scrubbed" too before residents can return. It's unclear where the contaminated soil will go. For now, it is being stored on the outskirts of towns in the affected area. Residents are obviously concerned about long-term storage plans for the waste.

"Many areas cannot be decontaminated at all because of thick forests or because they are mountainous. Only houses and areas surrounding the houses, and 10-meter strips along the roads, are decontaminated," says Podniesiński. Residents and scientists are concerned "that any major downpour will wash radioactive isotopes out of the mountainous, forest areas and the inhabited land will become contaminated again. The same is true of fire, which, helped by the wind, can easily carry radioactive isotopes into the nearby towns. These fears are not without foundation, over the last year this has happened at least twice in Chernobyl," he said.

In the orange zone, Podniesiński found farmer Naoto Matsumura, who returned illegally to live because "he could not bear to see whole herds of cattle wandering aimlessly in the empty streets when their owners had fled the radiation." When Matsumura moved back, the area was still a red zone, but he told Podniesiński he couldn't stand to see them starving to death or being killed by the authorities.

"I came to Fukushima as a photographer and a filmmaker, trying above all to put together a story using pictures," says Podniesiński. "I was convinced that seeing the effects of the disaster with my own eyes would mean I could assess the effects of the power station failure and understand the scale of the tragedy, especially the tragedy of the evacuated residents, in a better way." He regularly goes back to Chernobyl and plans to go back to Fukushima in the near future.