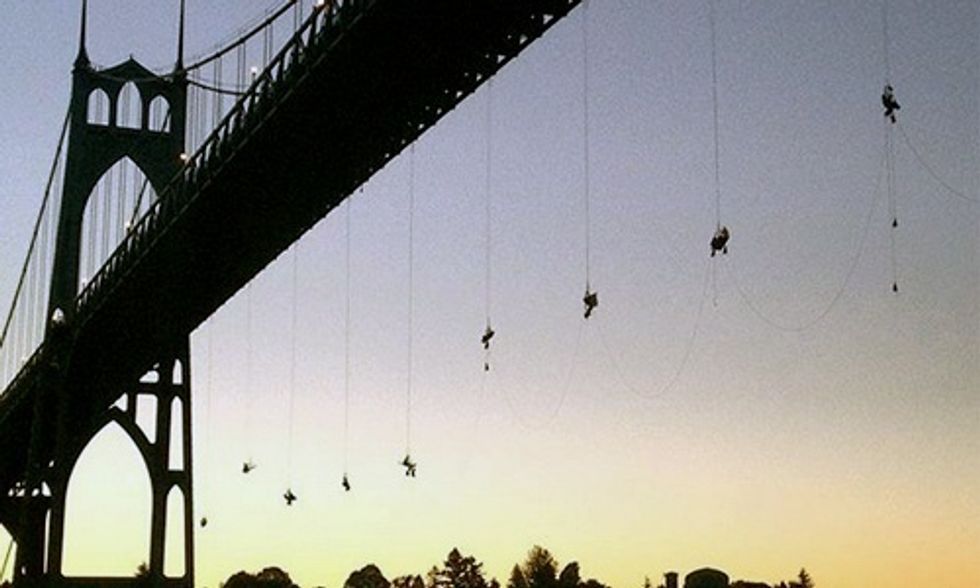 [Editor's note: For the latest on this action, click here. To see 10 stunning photos of the 13 climbers suspended from the bridge, click here. To watch four videos explaining why 13 people would hang from a bridge to say "No Arctic Drilling," click here.]

Thirteen Greenpeace activists have suspended themselves from St. Johns Bridge in Portland, Oregon this morning to block a Shell Oil vessel—the MSV Fennica—from leaving port for Alaskan waters. The climbers have enough supplies to last several days, and are prepared to stay in Shell's way as long as possible, according to Greenpeace.

Last week, the Obama administration granted federal permits that clear the way for the oil company to begin drilling in the Arctic Ocean. The company is only permitted to drill the top sections of its wells because it lacks the equipment to cap the wells in case of emergency. The ice breaker carrying the required capping stack for the wells, had been receiving repairs to its damaged hull in Portland and is now trying to leave the port. Once the Fennica is at Shell’s drill site, Shell can reapply for federal approval to drill into hydrocarbon zones in the Chukchi Sea.

Activists hang under the St. Johns Bridge in Portland, Oregon, In an attempt to block the Shell leased icebreaker, MSV Fennica July 29, 2015. A flotilla of kayaktivists floats underneath them in a channel of the Williamette River. Photo credit: Greenpeace USA

“Every second we stop Shell counts. The brave climbers here in Portland are now what stand between Shell and Arctic oil," said Annie Leonard, executive director of Greenpeace USA.

"This is President Obama’s last chance to wake up and realize the disaster that could happen on his watch," continued Leonard. "There is still time for our President to cancel Shell’s lease to drill in the Arctic, living up to the climate leader we know he can be. Shell has ignored the world’s best scientists, as well as millions of people around the world, who have all said repeatedly that the melting Arctic is a dire warning, not an invitation.

"Greenpeace prioritizes safety above all else—rappelling from a bridge is a walk in the park compared to the risks that we'll face if we continue the climate change trajectory we're on now."

Leonard was interviewed this morning on Democracy Now! Watch here:

Today's action is only one of several others happening this week. Yesterday, an array of kayaktivists and protesters gathered, starting at noon and staying for a 24-hour vigil at Cathedral Park in Portland, at the banks of the Willamette River in anticipation of the Fennica departing from the port for the Arctic.

“Scientists tell us we can’t drill in the Arctic if we want to avoid dangerous climate change and sea level rise that threatens three-quarters of the Earth’s major cities in the next few decades," said Daphne Wysham of Center for Sustainable Economy, one of the organizers of vigil. "Nevertheless, Shell is putting its corporate profits ahead of the future of the planet and preparing to drill in a region where an oil spill cannot be cleaned up. Portland kayaktivists are the last phalanx of resistance to this insanity.”

Environmental activists in a tribal canoe blockade Shell's Drilling Rig Polar Pioneer delaying its departure from Seattle's Elliott Bay bound for the Arctic on June 15. The Polar Pioneer is one of two drilling vessels heading towards the Arctic for Shell this year. The second, the Noble Discoverer, is one of the oldest drill ships in the world. Photo credit: Greenpeace USA

These actions comes on the heels of a nationwide protest earlier this month where people in 13 states gathered for a “ShellNo” Day of Action asking President Obama to revoke oil and gas exploration leases in the Chukchi Sea.