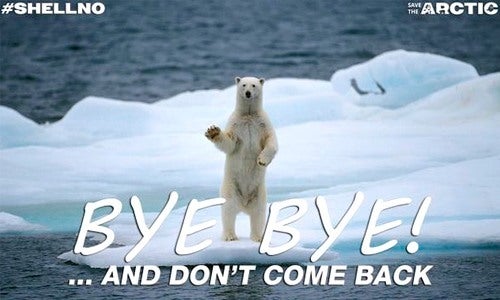 After finding little oil and natural gas, Royal Dutch Shell announced yesterday that it would end its Arctic drilling operations in the Chukchi Sea off Alaska’s coast “for the foreseeable future.” Shell said the amount of oil and gas found in the Burger J well is “not sufficient to warrant further exploration.”

Climate groups, such as Greenpeace and Sierra Club, had spent months taking dramatic public actions to call on President Obama to reverse his decision to allow Shell to drill in the Arctic. There were scores of events all around the country. One of the most notable was in July when 13 Climbers suspended themselves from a Portland, Oregon bridge to block a Shell oil vessel from heading to the Arctic. The 40-hour standoff ended with Greenpeace calling on President Obama to “join the millions of people who are speaking with one voice to say it loud and clear: #ShellNo.”

So needless to say, these groups were thrilled when Shell made the announcement.

Here are the 13 best Tweets from climate activists and organizations celebrating their victory:

2. Many people were so happy they just wanted to dance:

Raise your hand if you always wanted Shell to leave the Arctic alone! #ArcticRoar pic.twitter.com/YiVgjwlGPU

4. Polar bears even took to dancing: