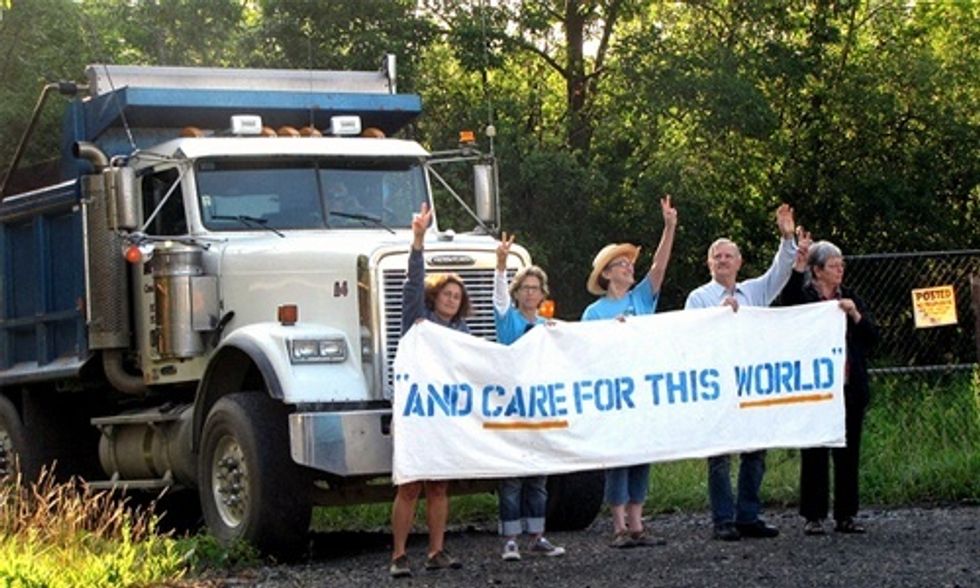 Early this morning, in a peaceful civil disobedience action against gas storage in Seneca Lake salt caverns, which took place the day after President Obama announced the Clean Power Plan to move the nation away from fossil fuels, 13 people from six New York counties were arrested while reading verses from Pope Francis’ recent encyclical letter on climate change.

Just after dawn, the 13 formed a human blockade at the north and south entrances of Crestwood Midstream’s gas storage facility on Route 14, preventing all traffic from entering or leaving and began their reading. Joining the pontifical read-aloud was the Rev. John D. Elder, former pastor of the historic First Church in Oberlin, Ohio and present part-time resident of Schuyler County. Rev. Elder was not arrested.

Large trucks attempting to leave the facility were blocked at both the north and south gates of the Crestwood property shortly after 7 a.m. Photo credit: We Are Seneca Lake

The words on the banners carried by today’s protesters—“Love the Common Good,” “And Care for This World”—were lines from the prayer that closes the encyclical.

Large trucks attempting to leave the facility were blocked at both the north and south gates of the Crestwood property shortly after 7 a.m. Schuyler County deputies arrested the blockaders at about 7:30 a.m. The 13 were taken into custody, charged with both trespassing and disorderly conduct and released. None of the 13 blockaders this morning had been previously arrested as part of the We Are Seneca Lake movement, which opposes Crestwood’s plans for methane and LPG storage in lakeside salt caverns.

Two other individuals on the media team were inadvertently arrested and charged with trespassing (one was the videographer and the other one was me).

Dan Taylor, 64, of Oxford in Chenango County said, "Yesterday, President Obama released the Clean Power Plan and put the nation on the path to renewable energy. Today, we are standing at the gates of dirty energy to say that Crestwood’s plan for the Finger Lakes is not a clean power plan. I am here to help impede the build-out of fossil fuel infrastructure."

This morning’s recitation continued the read-aloud from the Pontifical document, Laudato Si! On Care for Our Common Home, that began during a blockade on June 30 and that continued during blockades on July 7 and July 20. All together, 44 people have been arrested as part of encyclical-themed blockades at Crestwood.

Joining the pontifical read-aloud was the Rev. John D. Elder, former pastor of the historic First Church in Oberlin, Ohio, and present part-time resident of Schuyler County. Photo credit: We Are Seneca Lake

One of today's arrestees, Faith Muirhead, 45, of Beaver Dams in Steuben County, grew up in the town of Reading near the salt caverns. She said, “We are all of us stewards of the earth. I am a native of Reading and know that this area and Seneca Lake are gifts to be cherished and protected. I feel a responsibility to do what I can to protect these waters and this land. So I pray, I walk, I send letters, I call my state representatives and today, I stand at the gates of Crestwood to demonstrate my resolve. I am a teacher and a teacher of teachers. Today, I teach by putting my freedom in jeopardy in order to bring attention to the potential risks inherent in Crestwood’s plans."

The total number of civil disobedience arrests in the eight-month-old campaign against gas storage now stands at 332.