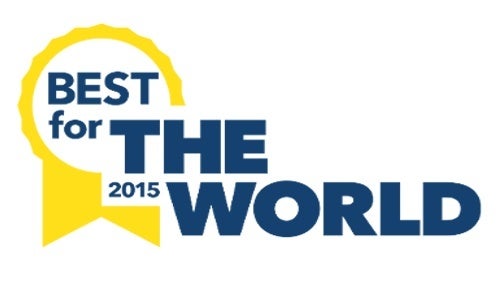 While many businesses get a bad reputation for putting profit above everything, including the survival of the planet, others are starting to think differently. B Lab is a nonprofit organization that encourages businesses to consider the welfare of their employees, their communities and the environment as well as their bottom line, certifying businesses as “B Corporations.”

B Lab honors the top-performing companies among its certified “B Corporations,” all of whom are striving to be socially and environmentally responsible. Photo Credit: B Lab

One of the ways it encourages its member companies to maintain these high standards is through its annual Best for the World awards, now in their fourth year. The awards recognize the companies that had the most positive social and economic impact in the past year. The list honored 120 of its 1,200 member B Corporations in the overall category as well as in categories for worker, community and environmental impact, citing a total of 350 companies among the various categories. They represent the top 10 percent of B Corporations for each category.

In the Best for the Environment category, 116 companies were cited, up from 84 last year. They ranged from sole proprietorships and micro-enterprises (one to nine employees) to mid-sized businesses (more than 50 employees) like California’s Falcon Waterfree Technologies and Method Products, and Vermont’s Seventh Generation. Though most were in the U.S., they also came from countries such as Canada, Italy, the Netherlands, Colombia, Chile, Brazil, Argentina, Australia, Kenya and China. And while many are involved directly in sustainability services and products such as renewable energy or waste management, the list also include companies whose business is travel, apparel, personal care, IT, sporting goods, travel, and food and beverage, but who see a connection between environmental sustainability and the core business.

Among the companies honored in the environment category was Fort Collins, Colorado’s New Belgium Brewing Company, the third largest craft brewery in the U.S. The employee-owned, mid-sized business has been on the Best for the Environment list for the past three years, thanks to what B Lab describes as its “near-obsession with waste reduction, energy savings and water usage.” Both its original Colorado brewery and the one it’s building in Asheville, North Carolina are reclaimed brownfield sites.

“We have an additional program where we tax ourselves for all the additional, non-renewable energy we buy,” said New Belgium’s assistant director of sustainability Katie Wallace. “We put the money toward our future renewable energy projects. We actually opened up a portion of that tax fund and are inviting our coworkers to submit their ideas for how to use that money. Many of our best ideas come from our coworkers in the brewery and warehouse,” said Wallace. “By committing to involving them, we get so much more than we would if it were just a few of us up here at our desks.”

Wallace pointed out that New Belgium operates with an awareness that conserving and protecting environmental resources has a direct impact on the future and sustainability of its business model and its profitability.

“From a business perspective, we see that our resources that provide our livelihood, like water, are drastically affected by things like climate change and drought and mismanagement,” she said. “Half of our water comes from the Colorado River, and there’s a business risk to being dependent on that. By reducing the water we consume, we’re also reducing our risk.”

The business with the highest environmental score was Maine’s Atayne, a high-performance sportswear and outdoor apparel company. All its clothes are made with 100 percent recycled or organic materials, what it describes as “athlete gear made from trash.”

“We became a B Corp because we didn’t like the story that was being written by most of the business community,” says company founder Jeremy Litchfield. “It was an easy decision to join the movement to write a new one.”

“Today’s honorees inspire all companies to compete not only to be best in the world, but best for the world,” said B-Lab co-founder Jay Coen Gilbert. “We hope many will take the first step by using the B Impact Assessment to measure and manage their impact with as much rigor as their profit.”