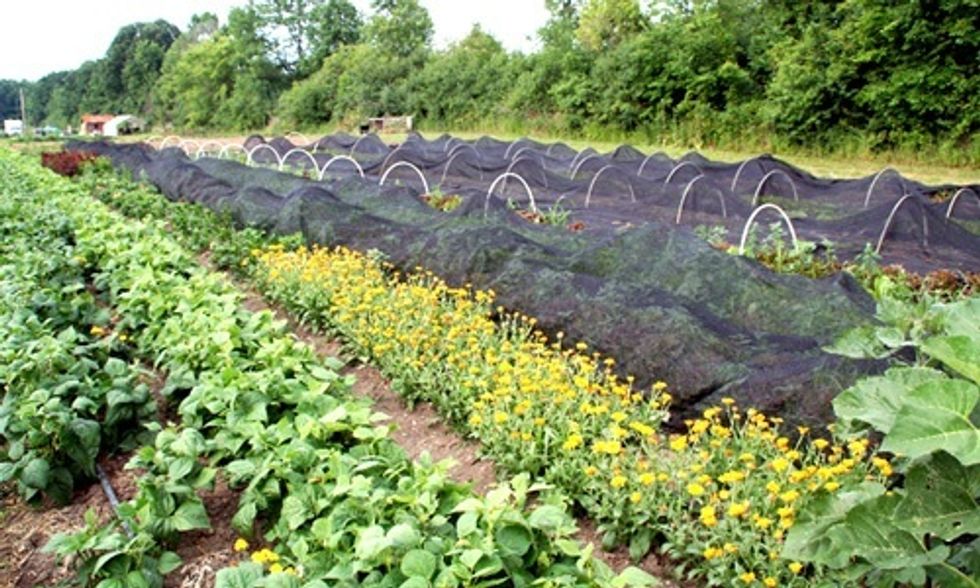 Many cafeterias around the U.S. are working to provide students with healthy, sustainable meal options. To do this, colleges and universities are changing the way that they purchase and prepare food in their cafeterias and many of them are beginning to source food locally.

Universities can play a big role in their local and state economies: they provide jobs and attract new businesses to the community. Now, many of these institutions are taking their role a step further and investing in local agriculture by serving locally sourced food in their cafeterias.

Here are 12 universities leading the way in sustainability.

1. American University in Washington, DC, purchases roughly 36 percent of the food served in its dining halls within 250 miles of its campus. The university has also started a community garden on campus and hosts a drop-off location for local CSA initiatives. American University students conduced a survey that showed that by removing cafeteria trays, food waste and the number of dishes used per person declined significantly. In Fall 2009, the university eliminated trays in its Terrace Dining Room.

3. Bowdoin College in Brunswick, Maine, is committed to two primary reasons for sourcing local food for its dining services: to reduce carbon emissions from having food delivered long distances and to strengthen the local economy by buying from local farms and vendors. Bowdoin College currently sources an impressive 34 percent from local vendors and is dedicated to increasing that number every year.

4. Cornell University in Ithaca, New York, purchases approximately 22 percent of its total food from regional sources. The dining department purchases seasonal produce through its partnerships with the local farming community and serves beef that is raised locally without growth hormones and daily antibiotics. The university composts about 850 tons of food waste from its dining halls each year.

5. Duke University's campus in Durham, North Carolina, offers eateries with both organic produce and antibiotic—and hormone-free meat and dining services spends 25 percent of its food budget on locally sourced items. Duke is also committed to limiting its amount of food waste. Surplus food is donated to food banks and both pre—and post-consumer scraps are composted.

6. McGill University in Montreal, Quebec, currently spends 47 percent of its food budget on produce from its own on-campus farm and from growers within 300 miles of the campus. The university also offers sustainably harvested seafood products and fair trade coffee across campus. All animal products served are hormone and confinement free and vegetarian fed.

7. Middlebury College in Vermont partners with 50 year-long and seasonal local vendors, including its own organic farm. The college's dining services currently uses 32 percent of their annual food budget on locally sourced produce, meat and poultry, eggs, soymilk and dairy products.

9. In 2013, 27 percent of the University of California, Berkley's food purchases were locally grown, organic, fair trade or humane. Additionally, 38 percent of its food purchases were produced by locally-owned businesses. In July 2014, the university launched its Global Food Initiative to address food security in a way that is both nutritious and sustainable.

10. The University of Illinois – Urbana-Champaign spends 25 percent of its yearly food budget on locally grown or processed food items. Campus dining services also exclusively serve fair trade coffee and almost all seafood is sustainably harvested. The university is also very committed to reducing waste and has enacted efforts to recycle cooking oil for biodiesel production and currently a quarter of the meals served on-campus are trayless.

11. The University of Wisconsin—Madison committed to local purchasing in the late 1990s. The university's dining halls have partnered with approximately 40 local growers and food distributors to serve meals to the 7,000 undergraduates living in its residential housing.

12. The dining services of Yale University located in New Haven, Connecticut, strive to provide students with food that is grown and produced locally and sustainably. Up to 37 percent of the food served in the dining halls meets one or more of the university's sustainability requirements. Yale University also offers sustainable menu options for its catered events and works hard to eliminate the amount of waste produced in its dining facilities.