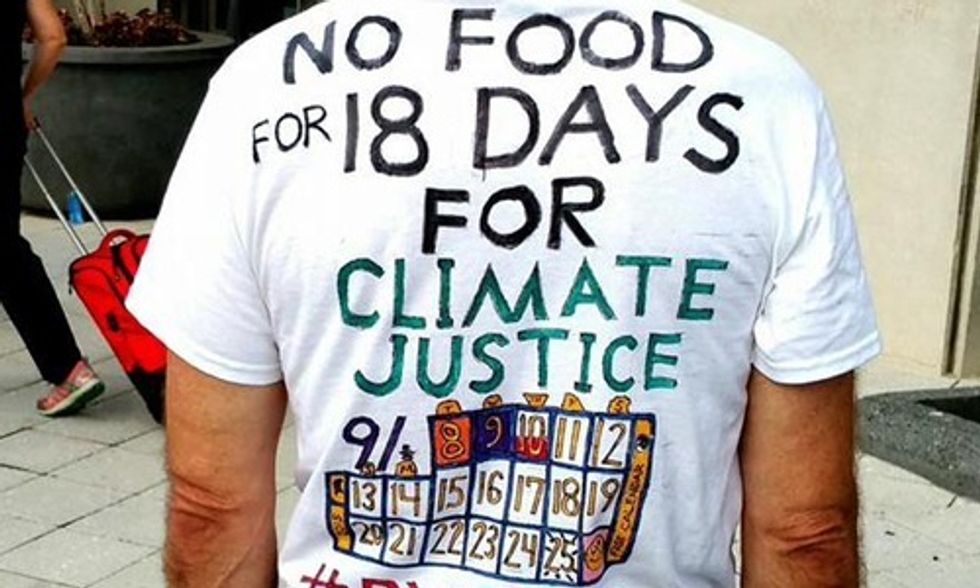 Twelve members of Beyond Extreme Energy (BXE), ages 19 to 72—from California, Virginia, DC, New York, New Jersey, Connecticut, Nebraska, Michigan and North Carolina—are in the beginning days of a planned 18-day, water-only “Fast for No New Permits” for fossil fuel infrastructure in front of the Federal Energy Regulatory Commission (FERC), a virtual rubber-stamp agency for the fracked gas industry.

Each weekday until Sept. 25 we will be on the sidewalk in front of FERC from 7 a.m. to 6 p.m., leafletting FERC employees—over a thousand of them—as they arrive for or leave from work. We're also passing out leaflets to thousands of others who work or live in the area who walk by.

It’s not a very aesthetic area, mostly high-rise office buildings and condominiums. There are some colorful begonias around the FERC building and about 15 young trees growing across the street just three blocks north of Union Station. Also across the street is a 30-foot high stone wall on top of which the red line trains of the DC Metro subway system come by loudly every 10 minutes or so, interrupting any and all street conversations.

For the 12 of us, joined by supporters and people fasting for shorter periods of time, this will be our “home” until Sep. 25, the day after Pope Francis speaks to a joint session of Congress. For some who have slept and will be sleeping here overnight, it’s a 24-hour “home.”

The first two days have actually been pretty brutal because of the high humidity and temperatures in the low- to mid-90’s. The heat index where we are could well have been more than 100 degrees because of all the concrete around us.

Every morning and late afternoon we check in with each other to see how we are doing and to finalize plans for the day. This morning one of the older fasters reported that he had almost fainted when he stood up too quickly; as I’ve learned from past fasts, it’s essential during an action like this to move deliberately and consciously, very aware of how your body is dealing with the lack of food.

Why are we putting ourselves through this?

One reason is the upcoming Sept. 22 - Sept. 27 visit of Pope Francis to the mid-Atlantic region of the U.S. BXE is very supportive of his repeated calls for action on climate, environmental and social justice. Some of us have been reading the Pope’s historic encyclical, “Laudato Si’, On Care for Our Common Home,” on the FERC sidewalk. We see our fast and a series of other activities in DC leading up to and after the Pope’s speech before Congress on Sept. 24 as part of the process of forging a stronger and deeper climate justice movement, one capable of meeting the urgent challenges of this do-or-die decade.

We are fasting because the movement which we are representing has tried every other means available to get FERC to stop being a rubber-stamp agency for fracked gas infrastructure (pipelines, compressor stations, storage and export terminals). Fasts and hunger strikes are usually undertaken when the oppressors have refused to be moved and more serious tactics must be utilized.

We are calling upon FERC to put renewables first. It must break its alliance with the fossil fuel industry and issue "No New Permits" for fossil fuel infrastructure until it has prioritized wind, solar and renewable energy.

What do we hope to accomplish? We hope our message will reach FERC employees, as well as the general public and Pope Francis. We are openly calling for whistleblowers. We want to strengthen the movement fighting FERC’s corrupt ways and the overall movement for climate justice and positive social change.

BXE during this fast is also working to make connections between issues. Struggles for justice are related. For example, we support the Black Lives Matter movement and on one of the days of our fast we will be doing public education in front of FERC about the importance of their efforts.

How can you be supportive of this Fast for No New Permits?

1. Join us at our fast in Washington, DC or where you live, for anywhere from one day to a couple of weeks. More information, including on how to sign up can be found here.

2. Come to DC for the actions happening Sept. 22 - Sept. 25. The big one is the morning of Sept. 24 on the national mall, between 3rd and 7th Street and near the U.S. Capitol. There will be speakers and music before and after the Pope’s 9:30 a.m. address to Congress; the Pope’s speech will be broadcast to everyone on the mall and his office has announced that he will come out to address the crowd after he speaks inside.

On Sept. 25 at Noon in front of FERC, we will end our fast. Plans are still developing, but we intend to make an effort to deliver five copies of the Pope’s encyclical to the five FERC commissioners. We will walk in a serious procession around the FERC building. We will hear from fasters about what this 18 days without food has meant to them.

3. Participate in the “No New Permits Solidarity Fasting Quilt” project. We are putting together a quilt with stories of local struggles against FERC or for justice, as well as drawings and words from people who are fasting about why they are doing so. Squares will be 12 inches on each side, with an additional inch on each side for when they are all put together to make a beautiful mosaic of our movement. Any color fabric can be used. They should be sent no later than Sept. 16 to CCAN, 6930 Carroll Ave., Suite 720, Takoma Park, Maryland. 20912, Att: Quilt project.

4. And finally, you can call FERC at 1-888-715-9918 to demand that they stop being a rubber stamp for the fossil fuel industry, prioritize renewables and issue no new permits for fossil fuel infrastructure until these changes are made.

Let’s rise up now in defense of and in care of our common home!

Ted Glick is the National Campaign Coordinator of the Chesapeake Climate Action Network. Past writings and other information can be found at http://tedglick.com and he can be followed on twitter at http://twitter.com/jtglick.