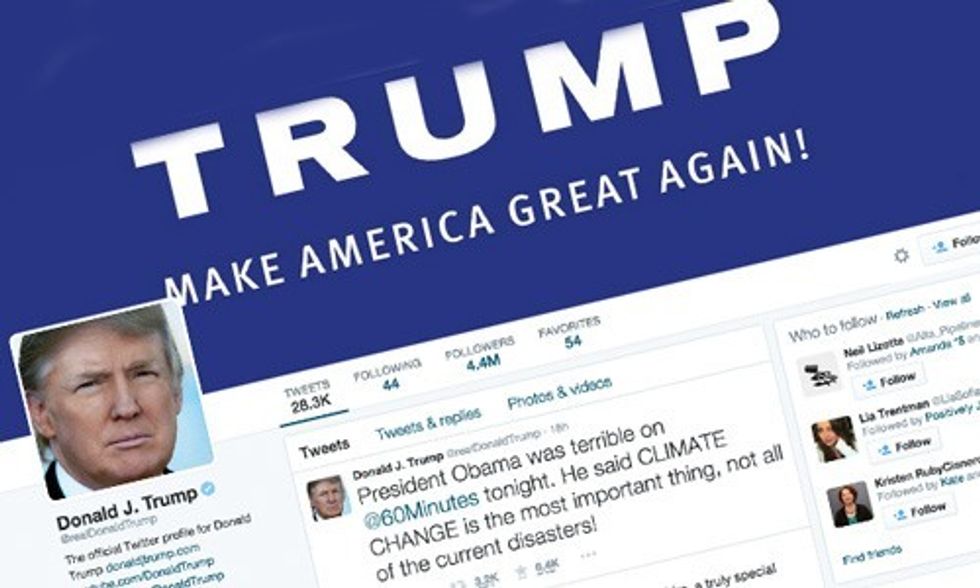 Donald Trump took to Twitter to fire back at President Obama for his remarks about him during an interview on 60 Minutes last night.

When asked about Trump, Obama called him “the classic reality TV character” and a “great publicity seeker.” Obama also said in the interview, "My definition of leadership would be leading on climate change, an international accord that potentially we'll get in Paris."

Well, Trump did not like any of that. He has repeatedly said he is "not a believer in climate change," even going so far as to call global warming a hoax "created by and for the Chinese to make U.S. manufacturing non-competitive."

President Obama was terrible on @60Minutes tonight. He said CLIMATE CHANGE is the most important thing, not all of the current disasters!
— Donald J. Trump (@Donald J. Trump)1444614188.0

And, as you can imagine, many people responded to Trump's tweets. Here are some of the funniest responses:

@corkdork @realDonaldTrump I have people that will put together the best climate you've ever seen. Only losers won't like it.
— Nerdbraska Dan (@Nerdbraska Dan)1444614738.0

It really kills you that #Obama has been elected President twice and you NEVER will be, huh, @realDonaldTrump? https://t.co/pRpjJ1z1YP
— Scott Wooledge 🌹 (@Scott Wooledge 🌹)1444614392.0

[email protected] we should build a giant wall to keep out all the current disasters
— Alley Carbajal (@Alley Carbajal)1444617577.0