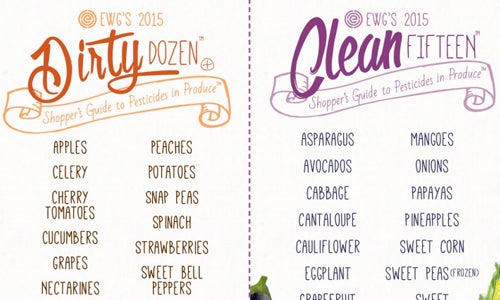 Contrary to the old adage, an apple a day may not keep the doctor away. According to the Environmental Working Group’s (EWG) 2015 Shopper’s Guide to Pesticides in Produce, apples topped the list as the most pesticide-contaminated produce for the fifth year in a row. Peaches and nectarines round out the top three “dirtiest” foods while avocados, sweet corn and pineapples are among the cleanest. EWG’s annual Dirty Dozen and Clean Fifteen lists rank fruits and vegetables according to pesticide residue levels reported by the U.S. Department of Agriculture (USDA). 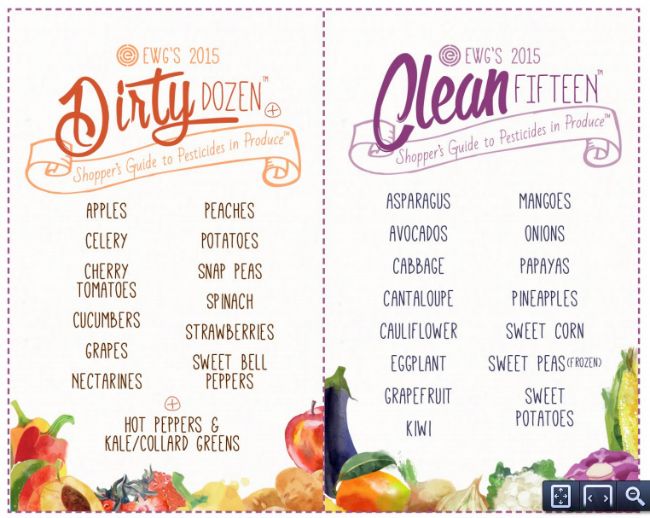 EWG unveiled the Dirty Dozen and Clean Fifteen according to pesticide levels reported by the USDA. Source: EWG

Despite growing consumer demand for pesticide-free fruits and vegetables evident in increased organic food sales, pesticides were found on nearly two-thirds of the 3,015 produce samples tested by the USDA, even in some cases after they had been washed and peeled.

“The bottom line is people do not want to eat pesticides with their fruits and vegetables,” said Ken Cook, EWG’s president and cofounder. “That’s why we will continue telling shoppers about agricultural chemicals that turn up on their produce, and we hope we will inform, and ultimately, empower them to eat cleaner.”

165 different pesticides were identified on the USDA food samples with 99 percent of apples, 98 percent of peaches and 97 percent of nectarines testing positive for at least one residue. Cherry tomatoes, grapes, snap peas and potatoes were also among the most contaminated with potatoes averaging more pesticides by weight than any other produce. For the third year in a row, EWG also expanded the Dirty Dozen list with a Plus category to include hot peppers and leafy greens that contain trace amounts of highly hazardous pesticides, including organophosphate and carbamate insecticides. Acephate, chlorpyrifos and oxamyl (highly toxic insecticides) are banned on some crops but still permitted on hot peppers. And although pesticides DDE and dieldrin were banned years ago, residue from agricultural soils is still found on leafy greens grown today.

Pesticides have been linked to a number of negative impacts on the environment and human health, including depression and suicide in farmers, decreasing bee populations and increased risk of Parkinson’s disease. A recent study found lower pesticide levels in people who eat organic food, and EWG confirms that the best way for consumers to avoid pesticides in food is to purchase organic produce if possible. If food accessibility or financial restrictions limit access to organic foods, the Clean 15 list highlights produce with the lowest levels of pesticide exposure and is also a good option.

“We are saying, eat your fruits and vegetables,” said Sonya Lunder, EWG’s senior analyst. “But know which ones have the highest amounts of pesticides so you can opt for the organic versions, if available and affordable, or grab a snack off the Clean Fifteen.”