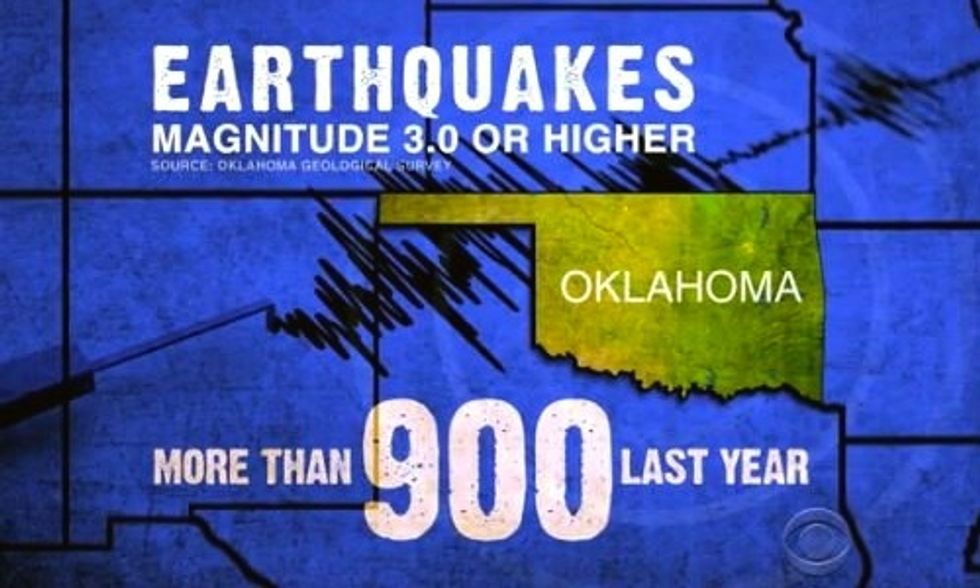 After the Oklahoma City area was hit by at least a dozen earthquakes in less than a week, the Oklahoma Corporation Commission, which regulates the state's oil and gas industry, ordered Monday that several injection well operators reduce wastewater disposal volumes.

"We are working with researchers on the entire area of the state involved in the latest seismic activity to plot out where we should go from here," Oil and Gas Conservation Division Director Tim Baker told the Associated Press.

The commission's plan addresses five wastewater injection wells operating within 10 miles of the center of the earthquake activity near Edmond, a suburb outside of Oklahoma City. The plan calls for one well, located 3.5 miles from the epicenter, to reduce its disposal volume by 50 percent, with four more wells reducing their volumes by 25 percent. Other wells within a 15-mile radius will undergo further testing. The commission, according to the AP, said the operator of the well closest to the earthquake activity, Pedestal Oil Company Inc., has agreed to suspend operations entirely to assist the agency's research effort, and the operator of another well, Devon Energy Production Co., has also agreed to suspend operations.

However, one Oklahoma oil company is defying the state regulator’s request that it shut down six wastewater disposal wells—located more than 100 miles northwest of Oklahoma City—used as part of the company's fracking operations.

According to the The Wall Street Journal:

Sandridge Energy Inc., which has complied with similar requests in the past, said this time it won’t stop using its wastewater disposal wells ...

The Oklahoma Corporation Commission, which regulates energy companies, is working on legal action to modify Sandridge’s permits in order to force it to abandon the wells, said Matt Skinner, a spokesman for the agency ...

Sandridge’s refusal to comply is a closely watched challenge to the state’s authority. The company’s earthquake conundrum is one that more drillers could face this year if oil prices continue to languish at low levels. Some of those, like Sandridge, need disposal wells to keep producing crude.

Sandridge may be reluctant to shut down the wells because it needs every bit of revenue it can generate at this point, said Jason Wangler, an analyst at Wunderlich Securities. Even if Sandridge continues to pump all the oil and gas it can, the company could run out of cash in 2016, he said.

On New Year's Day, a 4.2-magnitude earthquake struck near Edmond. On Monday, at least three earthquakes were recorded in the Stillwater area, the largest of which had a magnitude of 3.2, according to the U.S. Geological Survey.

The commission announced in November 2015 that Oklahoma now has more earthquakes than anywhere else in the world. Scientists have linked this never-ending spate of tremors to the state’s drilling boom. The Oklahoma Geological Survey concluded that the injection of wastewater byproducts into deep underground disposal wells from fracking operations has triggered the seismic activity in the state.

Oklahoma's uptick in tremors in just the past few years is staggering. Prior to the state's fracking boom, it averaged 1 to 2 earthquakes of a magnitude 3 or higher per year. By 2009, that number rose to 20. By 2013, it jumped to 585. Oklahoma closed 2015 with an estimated 900 earthquakes of a magnitude 3 or higher—that's an average of nearly three per day.

To grapple with the near-constant earthquakes that have been plaguing the state, the commission has forced changes to 500 disposal wells around the state, including the shutdown of wells around the city of Cushing, which holds one of the largest crude oil storage facilities in the world. But with 3,500 disposal wells in operation, these regulations only apply to a fraction of existing wells.

It's not just Oklahoma that's been hit hard by increased earthquakes. Colorado and Kansas have seen a rise in fracking-related earthquakes.