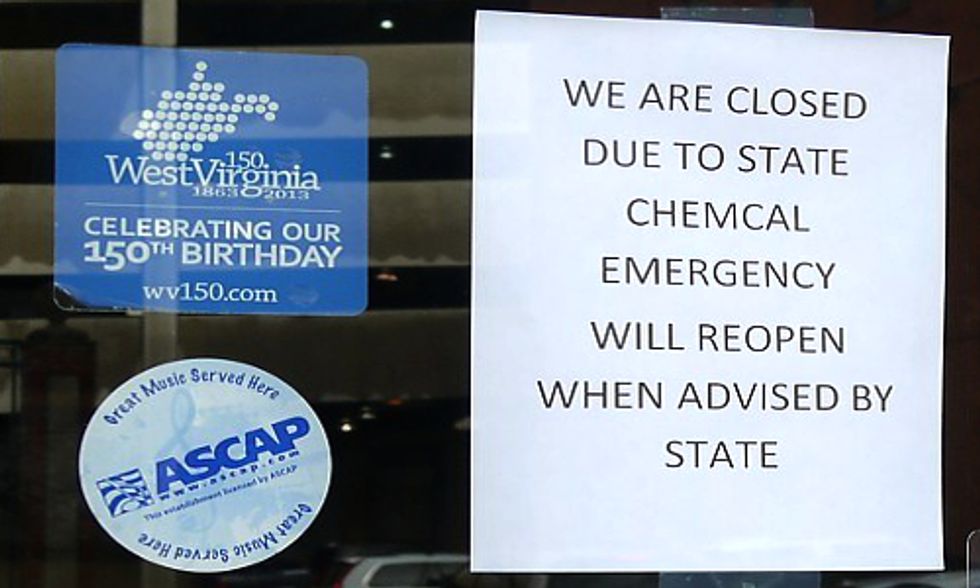 Yep, you read that right. Almost two weeks after a storage tank was discovered to be leaking 7,500 gallons of the coal-washing chemical Crude MCHM into the Elk River/water supply for nine counties in West Virginia, company officials finally disclosed yesterday that 300 gallons of another chemical, “PPH, stripped,” was also part of the brew.

Days after the spill, residents were told that the system had been flushed out and the water was safe to drink, but there has been a reported increase in chemical-related symptoms.

The news was reported yesterday evening in the West Virginia Gazette, so let’s turn to reporter Ken Ward, Jr. for more on that.

To recap briefly, the West Virginia chemical spill was detected on Jan. 9 at a storage facility owned by a company called Freedom Industries, which has since declared bankruptcy.

The site is on the banks of the Elk River, less than two miles upriver from intakes for the private water company West Virginia American, which serves nine counties with a population of 300,000 people. By the time the leak was locked down, contaminated water had entered the service territory.

An alert went out to use the water for nothing but flushing toilets. Along with the affected residents, the water crisis shut down hundreds of businesses, schools and other institutions.

Days after the spill, residents were finally told that the system had been flushed out and the water was safe to drink, but a subsequent increase in chemical-related symptoms strongly suggests that dangerous levels of Crude MCHM—or perhaps something else—were still present.

Yet Another Chemical Revealed

According to yesterday’s Gazette report by Ward, state and federal investigators only learned about the presence of PPH yesterday, from company officials.

The full article is well worth a read, especially for the detail it provides on both Crude MCHM and PPH, which is a known skin and eye irritant.

In what almost sounds like a cloak-and-dagger scenario, Ward reports that the information was disclosed privately to state DEP official Mike Dorsey by Gary Southern, the president of Freedom Industries, in advance of yesterday’s daily situational meeting between agencies and company officials.

Preliminary information from West Virginia American and state officials indicates that PPH would have been stripped out by its water treatment process before entering the distribution system, but that assessment will have to be confirmed by additional tests.

It also raises the question of what other shoes Freedom Industries has left to drop.

We noted in a previous article that the West Virginia chemical spill undermines the “clean coal” image that the coal industry has worked so assiduously to cultivate, and a comment on a repost of that article just drew our attention to another angle.

Although it’s natural to assume that the clean coal campaign is linked to electric power generation, according to our commenter Crude MCHM is used to prepare coal for another key sector, the steelmaking industry.

The steel industry has its own house to get in order in terms of greenhouse gas emissions, so that hardly lets the coal mining industry off the hook.

Not to get ahead of ourselves, but while searching the Tubes for information on “PPH, stripped,” we came across a patent application that describes a new chemical compound to be used in fracking, which contains “propylene glycol phenyl ether (PPH).”

We’ll try to nail that down in another post.

Visit EcoWatch’s WATER  and COAL pages for more related news on this topic.