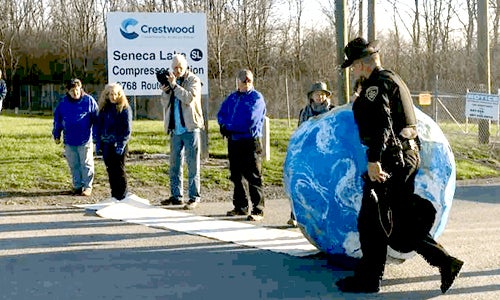 Five feet in diameter and swirling with clouds, a blue and green replica of Planet Earth helped a dozen human inhabitants block three trucks this morning at the main entrance of Crestwood Midstream. The Earth Day-themed civil disobedience action was part of an ongoing campaign against proposed gas storage in Seneca Lake’s abandoned salt caverns.

Organized by the direct action group, We Are Seneca Lake, the protesters, plus Earth, formed a blockade on the driveway of the Houston-based gas storage and transportation company shortly after sunrise at 6:45 a.m.

The group held banners that read, “Happy Earth Day! Decarbonize Now” and “We All Are on This [Earth] Together. While blockading, they read aloud together from a new report released this week by the World Resources Institute, which documents alarming new scientific findings about the ongoing climate crisis. Among them: 2015 was the warmest year on record, and the first three months of 2016 each far surpassed the warmest average temperature ever recorded for those months.

“Today is the day before Earth Day and the historic signing of the Paris climate treaty—enjoining the U.S., China and 195 other nations of the world in a pledge to reduce greenhouse gas emissions and to keep global warming below the catastrophic 1.5 degree level,” Town of Caroline Councilmember Irene Weiser said in a public statement to fellow blockaders.

“I am proud to stand here today, an elected official, joined by activists from across the region—to say that we stand in solidarity with the people of nations across this one precious earth, with a commitment to hold ourselves and our leaders accountable in upholding that essential promise.”

The protesters this morning were all charged with disorderly conduct and arrested at about 7:30 a.m. by Schuyler County deputies and transported to the Schuyler County Sheriff’s department, where they were ticketed and released.

Among the 12 arrested was a member of the We Are Seneca Lake media team, Michael Dineen. At the time of his arrest, Dineen, who was not part of the blockade, was photographing the protest from across Highway 14. Dineen was also charged with disorderly conduct.

The total number of arrests in the 18-month-old civil disobedience campaign now stands at 549.

“We will not stop blocking the gates of Crestwood until the expansion is canceled,” said Nathan Lewis of Hector in Schuyler County who was arrested today. “We will not sit idle as our community is threatened. There is more than one way to vote. We vote with our body and soul when we resist the fossil fuel industry.”

Crestwood also seeks to store two other products of fracking in Seneca Lake salt caverns—propane and butane (so-called Liquefied Petroleum Gases, LPG)—for which it is awaiting a decision by Governor Cuomo’s Department of Environmental Conservation.

“It’s been six years since the BP oil spill in the Gulf of Mexico; six months since the failure of the methane storage in Aliso Canyon; and over six days since TransCanada’s 16,800 gallon dilbit leak into South Dakota farmland,” said Debb Guard of Schenectady in Schenectady County who was arrested today. “Earth Day is a time to remind people that water, air and land are still at risk of contamination by the oil and gas industry. Earth Day is also a time to embrace renewable energy sources: solar, wind and geothermal.”

Today is the day before Earth Day and the historic signing of the Paris climate treaty—enjoining the U.S., China, and 195 other nations of the world in a pledge to reduce greenhouse gas emissions and to keep global warming below the catastrophic 1.5 degree level. I am proud to stand here today, an elected official, joined by activists from across the region—to say that we stand in solidarity with the people of nations across this one precious Earth, with a commitment to hold ourselves and our leaders accountable in upholding that essential promise.

Forty seven years ago a peace activist named John McConnell proposed Earth Day at a UNESCO conference—with a vision to create a special day each year to draw people together in appreciation of their mutual home and to bring a global feeling of community through the realization of our deepening desire for life, freedom, love, and our mutual dependence on each other.

As a peace activist he considered the devastation caused by pollution as acts of violence against the Earth. One can only imagine what he would have thought about today’s desperate measures to unearth fossil fuels by blowing off mountain tops, and raping the ground by injecting poisoned waters. What of the violence of slashing trees and leaving huge scars across our landscape to make way for pipelines? And what of the violence of ocean acidification killing countless species, and the warming waters and habitat loss in the arctic? What of the violent storms, massive floods, fires, droughts, and heat waves that have claimed countless lives? And the violence to the workers who are subjected to unsafe conditions to feed this planet’s fossil fuel habit, and the cancers, heart and lung disease, low birth weights to those who live in sacrifice zones? What of the violence that is already visiting the poor in under-developed countries, where sea level rise has caused them to relocate, and where droughts and famine underpin massive uprisings and refugee crises?

As part of his Earth Day proclamation McConnell wrote that “Planet Earth is facing a grave crisis which only the people of the earth can resolve, and in our shortsightedness we have failed to make provisions for the poor as well as the rich to inherit the Earth … and our new enlightenment requires that the disinherited be given a just stake in the Earth and its future.”

I am not so naïve as to believe that the disinherited will be given that stake. I believe we have to take it—take it back from the purveyors of violence like ExxonMobil who have lied about the harms their industry causes; take it back from Williams and Cabot for their unconstitutional pipeline, take it back from Crestwood who threatens the drinking water for thousands of people, and take it back from the regulators and elected officials who fail to do their jobs of protecting the public and our future.

And so I am proud to stand here today—not in violence—but in peaceful, loving, hopeful protest—to pledge my commitment to preserving this one and only and beautiful and cherished Earth for future generations.