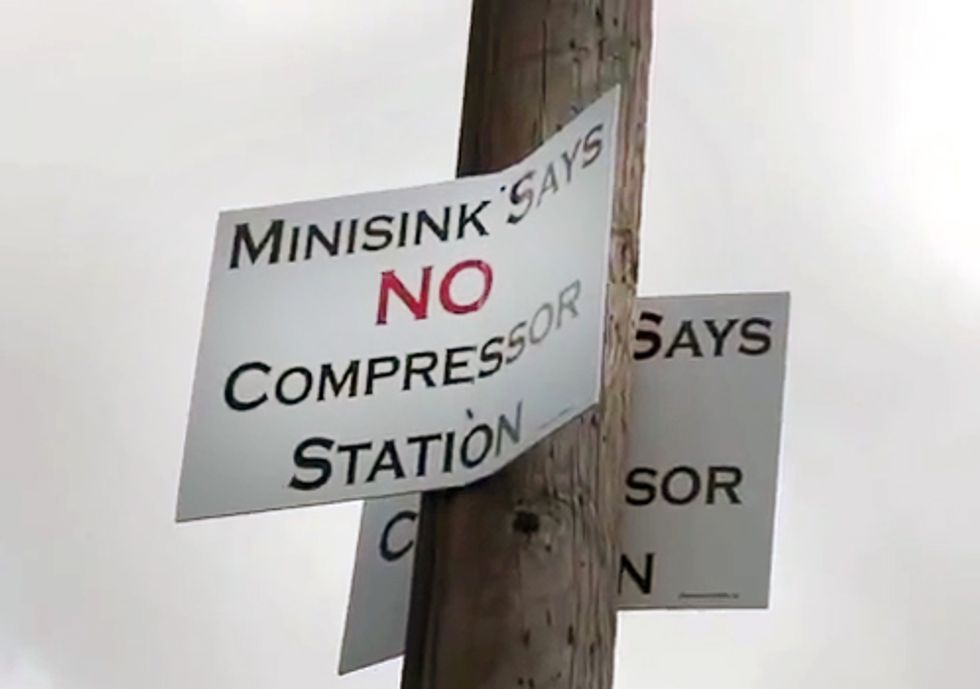 After undeniably great sacrifices for their country, an upstate community of 9/11 First Responders, veterans, their widows, and men and women who’ve recently returned from military duty are now finding their wellbeing compromised at the hands of Governor Cuomo’s gas agenda.

A compressor station, commissioned by the Millennium Pipeline and fast-tracked by the New York Department of Environmental Conservation (DEC) and FERC (Federal Energy Regulatory Commission), is slated to go up in the middle of a residential community in Minisink, NY, posing both environmental and health risks due to the high quantity of toxic emissions from this type of facility.

A large gas infrastructure is being laid throughout New York State including new pipelines, compressor stations and gas-fired power plants although approval for “hydrofracking” is still yet to be determined. Minisink is at the front line battle for New York, putting our 9/11 heroes’ already compromised health from Ground Zero at greater risk.

When residents first learned of plans to build the facility by Millennium Pipeline, a company owned by NiSource, they turned to their elected government officials for help. Ironically those same officials who invoke the memory of 9/11 every September, ignored their pleas for intervention. "As a first responder of 9/11, I have to strongly argue against the gas compressor in Minisink. Many of my colleagues are suffering and some have died as a result of the toxins in the air we were exposed to at ground zero," said John Odland, a Minisink resident.

Millennium Pipeline predicts that at full capacity the station would release 61,000 tons of pollutants into the air each year, including many known carcinogens, as turbines process and compress natural gas into pipelines for faster, more profitable delivery. Millennium does not deny these pollutants, which in addition to contaminating the air will seep into the soil and the regional watershed.

Vincent Pedre, MD, a NYC integrative physician that worked in the World Trade Center Screening Program for exposed workers at Mount Sinai Medical Center, said, “These First Responders have already faced severe exposures as part of their work. A new exposure like this is surely to lead to further respiratory complications, as well as affect their skin, stomach, nervous system, immune system and delicate hormone balance, possibly leading to cancer and an increased risk for autism in this region.”

Alternative plans do exist and have been documented. The alternative location is in an industrial area that once housed a compressor station that is currently inactive. Joseph Shields, president of Millennium, when asked why they are forcing the issue to place the compressor station in a residentially zoned area, he simply stated, “It’s about economics.”

The residents believe this is an outright lie since the alternative location is known to be the most cost effective and cause less environmental degradation, and is several miles from a residential area. Despite having a clear alternative location three out of five members of FERC voted yes to having the project move forward at the proposed Minisink location, setting an official precedent to ignore community harm.

For a few generations now, Westtown near Minisink, NY has been a haven for many commuting and retired NYC Police and Firefighters, so much so that it’s earned the local nickname, “Guns & Hoses.” Many of these individuals moved to the rural area just over an hour from NYC after the 9/11 tragedy to help them recover from respiratory and other illnesses they developed as a result of their service during 9/11.

There are approximately 190 homes within a half mile from the site of the proposed compressor station. “My family and I will be forced to walk away from our home and lose our life savings. My children will be left with nothing. Not to mention I have suffered a lung related injury that was directly related to the pollutants of 9/11,” said Rob Coppola, a former NYC fireman, and 9/11 First Responder.  “I’m not going to tell my children that thing is safe as the city told us ten years ago as we breathed in extremely harmful toxins.”

The gas compressor station has already received permits for construction from FERC as well as from the NY DEC, and is being justified under the pretext of increasing gas supplies to NYC—the same city, that many of these residents spent decades risking their lives for. However the driving force behind the project is Governor Cuomo's plan to open New York to the controversial process of hydraulic fracturing, including a plan to build a new gas-fueled power plant in a nearby town by Con-Edison.

John Feal, founder and president of the FealGood Foundation says “Eleven years ago thousands of First Responders were told by authorities that the air at the World Trade Center Site was safe to breathe. Today, we know this statement was untrue and placed a higher importance on economics than human life.”

The compressor station also poses serious safety issues, as evidenced by an explosive fire at an Artemas, PA, compressor station, which destroyed buildings, vehicles and 24 acres of land. The compressor that exploded is owned by NiSource and managed by Columbia Gas. The explosion could be felt from several miles away. Firefighters from five other counties were needed to contain the fire from the blast.

Robin Freunds said "My property in Westtown, New York directly butts up to the proposed site of the Minisink Compressor Project. I have lived in Westtown for 25 years. My husband gave his life on Sept. 11, 2001 as a New York City Fire Officer. The emotional toll this project has taken upon my family is great. I fear for my health, the health of my animals and community safety.”

There is only a small corps of volunteer firefighters in Minisink and no system in place to alert residents to evacuate, and the nearest burn unit is 60 miles away in Westchester, NY. George Racz, a local resident and NYC firefighter said, “We respond to fires on a daily basis in the city. I have been to several gas emergencies. I honestly can say I don’t know what my family’s chances of survival are if this compressor station were to explode.“

The residents continue to face an uphill battle against powerful forces but they are determined to win. Nick Russo said, “I am fighting for everything I ever worked for because some giant guru gas company [Millennium] is looking to destroy it.” The townspeople have hired an attorney in Washington D.C. and are preparing to take FERC to federal court this month.