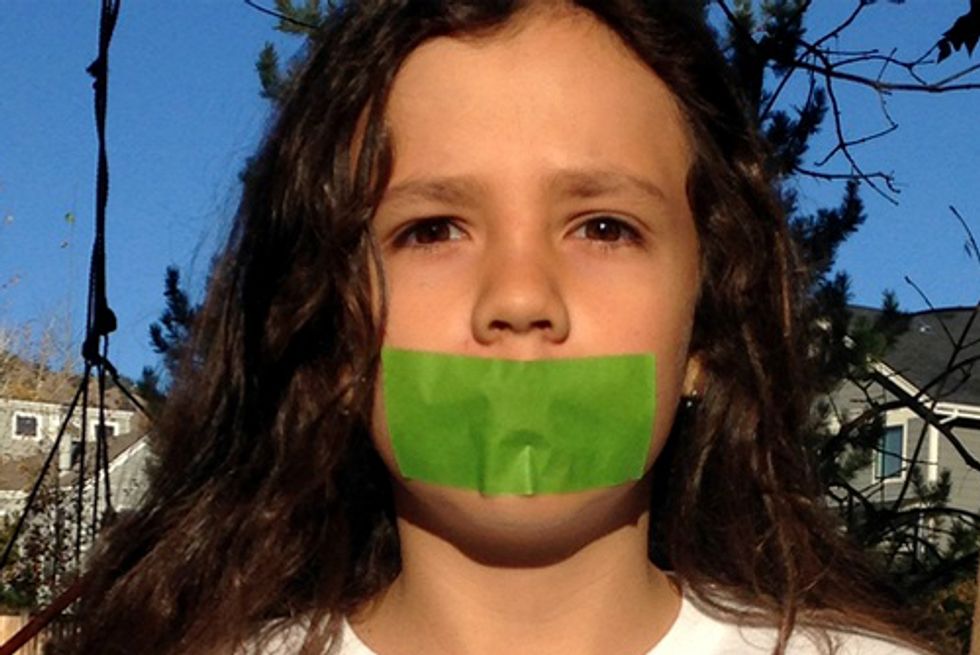 Eleven-year-old Itzcuauhtli Roske-Martinez is proving to the world that sometimes the most powerful thing you can say is absolutely nothing.

Today marks Day 22 of the indigenous eco-rapper's silent strike demanding science-based climate action. His T-shirt explains, “I am taking a vow of silence until world leaders take action on climate change." After classmates suggested that one sixth grader in Colorado couldn't influence leaders, Itzcuauhtli added, “When I say world leaders, I'm talking about us."

His T-shirt explains, “I have made a vow to silence until world leaders take action on climate change."

Accusing “so-called 'leaders'" of failing, Itzcuauhtli (pronounced “eat-squat-lee") asks why his generation should “go to school and learn all this stuff if there is not going to be a world worth living in? Maybe it's up to youth. Maybe each one of us has to be a world leader."

Judging by the hundreds of thousands of hits his site is getting, kids worldwide agree. Several classmates even tried to join his campaign, only to be forbidden by parents certain it wouldn't change anything.

“He was so disappointed," his mother, Tamara Roske, said. “He cried silent tears. It was heartbreaking." Itzcuauhtli, who will begin homeschooling after Thanksgiving, is bolstered by “overwhelming" international support, especially since actor and father-of-three Mark Ruffalo called the boy's campaign “brave and thoughtful."

Itzcuauhtli's greatest champion, however, is 14-year-old brother Xiuhtezcatl, director of Earth Guardians and a co-plaintiff in a youth climate lawsuit, the Supreme Court will consider Dec. 5. The brothers, raised in the Earth-honoring ceremonies of their father's Aztec culture, perform a passionate eco-rap and count Trevor Hall, Robert F. Kennedy Jr. and Michael Franti among their fans. They rocked Brazil's 2012 climate summit and, more recently, were part of the 400,000-strong at the People's Climate March in New York City.

After the march, though, Itzcuauhtli despaired when people insisted it was too late to avoid an apocalyptic future. On the white board he now communicates with, he writes, “I felt desperate. I had to do something drastic to change the outcome of our future. I decided I wasn't going to speak again until there was concrete action on climate change."

He looks hopefully toward the 2015 Paris UN conference, where leaders could agree on meaningful—and binding—recovery plans.

When asked why last week's historic U.S.-China climate deal didn't prompt him to resume the boisterous jokes his family misses, Itzcuauhtli responds, “It's not strong enough. [Former director of NASA's Goddard Institute] James Hansen says we have to cap carbon in the next year. If we wait another 15 years, which is when China said they would cap carbon, it's going to be too late.

Itzcuauhtli will resume speaking when he sees "we're moving together in the right direction." That means applying a planetary “prescription" written by 18 top climate experts, who outlined a recovery plan based on science, not politics—the same remedy demanded in his brother Xiuhtezcatl's lawsuits against state and federal governments. To achieve the six percent global carbon cuts necessary for a livable planet, Itzcuauhtli invites children and adults to “join me in this vow until world leaders:

Roske wonders when she'll hear her “little comedian" talk again. “Next month's climate gathering in Peru on Dec. 10 would be first day he'd break his silence. As a mom, I prefer he start talking before that." But, she acknowledges, she may have to wait more than a year. “That 2015 Paris climate summit will determine these guys' future on some level."

Itzcuauhtli and Xiutezcatl were part of the 400,000-strong at the People's Climate March in New York City.

Itzcuauhtli vows to continue as long as he must, despite calling his strike “the hardest thing I have ever done." While he still laughs and finds ways to communicate with peers, he expresses special gratitude for friends old and new who support him or, better yet, join his campaign to “amplify the voices of children everywhere."

Visit ClimateSilenceNow to join Itzcuauhtli's silence “even for an hour!"

Mary DeMocker writes about climates of all sorts and is cofounder of 350 Eugene. Visit her website for more of her work.