11 Reasons Why 'Everybody Hates Ted Cruz' 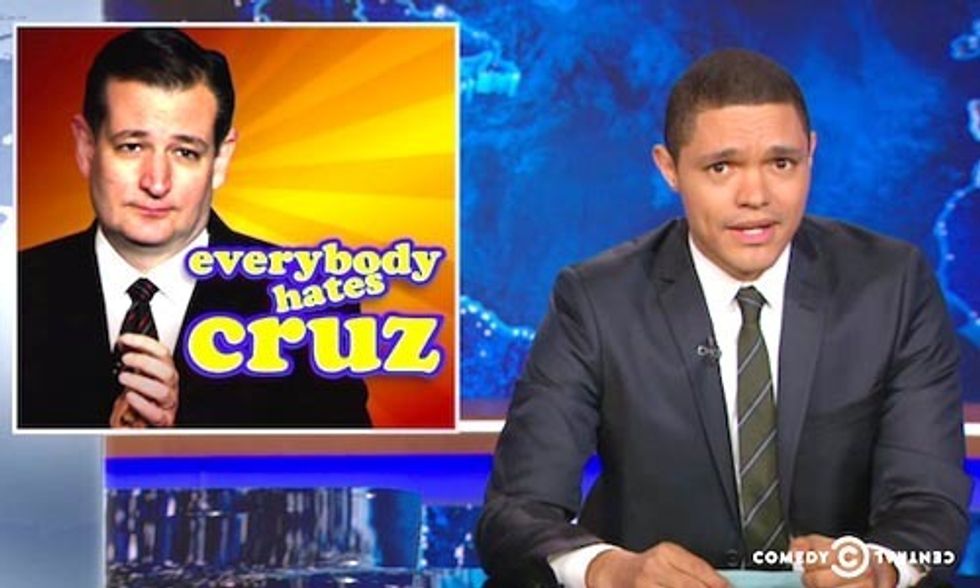 Sen. Ted Cruz (R-TX) has been surging in the polls lately, leading more and more political strategists to predict  (R-FL) for the Republican nomination. He was tied for first place with Trump in a poll of Republicans in Iowa last week. Cruz—well known for his over-the-top rhetoric—has made some outrageous statements on climate change in recent months.

1. On Wednesday, Cruz mocked President Obama's assertion that the COP21 climate summit in Paris was a "powerful rebuke" to terrorists and said the President and Hillary Clinton's stance on climate change as a security threat is "nutty, fruitcake stuff."

“What nonsense. I mean, President Obama and Hillary Clinton believe that the SUV in your driveway is a greater threat to our safety and security than are radical Islamic terrorists who are crucifying Christians and beheading children and pledging to wage jihad on the United States of America,” he said, repeating an attack line he has used before.

2. Cruz is using his position as Senate chairman of the Commerce Subcommittee on Space, Science and Competitiveness to hold a hearing on whether climate science is "data or dogma."

The hearing, Data or Dogma? Promoting Open Inquiry in the Debate over the Magnitude of Human Impact on Earth’s Climate, is scheduled for Tuesday. Cruz rejects the scientific consensus on global warming, arguing "there is still a healthy and vigorous debate about the causes and nature of climate change based on the data and scientific evidence." He also contends that observed satellite data shows no significant warming trend in the last 18 years, despite findings from the National Oceanic and Atmospheric Administration which specifically prove that there has been no "pause" in global warming.

Scientific conclusions should be based on the evidence & data, not the wishes of liberal global warming alarmists - https://t.co/8T9STFIF8K
— Senator Ted Cruz (@Senator Ted Cruz)1449088425.0

3. The so-called "data or dogma" hearing certainly won't be the first time the Texas senator has used a Senate hearing to debate climate science.

During a Senate hearing, Opportunity Denied: How Overregulation Harms Minorities, Cruz (chairman of the Subcommittee on Oversight, Agency Action, Federal Rights and Federal Courts, as well) stonewalled the entire discussion. Sierra Club President Aaron Mair, who testified, said he was there to talk about "how communities of color, which are disproportionately affected by pollution and climate disruption, rely on these safeguards to protect them." Instead, Cruz used the opportunity to badger Mair about the existence of global warming.

4. Even Carl Mears, a scientist whose data Cruz cites in defending his claims, came forward earlier this year to reject the way his data is being used.

Mr. Cruz … likes to cite statistics about the last 17 years because 17 years ago, the … observed temperatures were substantially above normal … When one starts their analysis on an extraordinarily warm year, the resulting trend is below the true long term trend. It’s like a pro baseball player deciding he’s having a batting slump three weeks after a game when he hit three homers because he’s only considering those three weeks instead of the whole season.

5. Cruz called President Obama's Clean Power Plan a "radical attempt to destabilize the nation’s energy system," "illegal" and "the sort of power grab that our founders would have recognized as tyranny.” The remarks were delivered last month at the Texas Public Policy Foundation's second annual at the Crossroads: Energy & Climate Policy Summit.

6. He joined fellow right wing politicians in comparing climate change to religion, which has “become a go-to GOP talking point during the run-up to next year’s elections,” according to a post from the University of Southern California’s Religion Dispatches. In October, Cruz told Glenn Beck: for “global warming alarmists ... climate change is not science, it's religion."

7. The Associated Press asked eight climate and biological scientists to grade (on a 0-100 scale) the comments of top presidential candidates for their scientific accuracy. Cruz ranked dead last with six percent.

The names of the candidates were removed to eliminate bias, so the scientists were scrutinizing them merely on scientific grounds. One of the scientists, Penn State University professor Michael Mann, said of Cruz's record: “This individual understands less about science [and climate change] than the average kindergartner. That sort of ignorance would be dangerous in a doorman, let alone a president.”

8. Conversely, Koch Brothers-backed group American Energy Alliance gave Cruz its highest ranking, labeling him a “hero” (he was the only candidate to receive the dubious distinction). The group produced a scorecard ranking the 2016 presidential candidates "based on their opposition to policies meant to tackle climate change, such as the Environmental Protection Agency regulation of greenhouse gas emissions, a renewable fuels standard and a tax credit that benefits wind energy," according to The Guardian. As for Hillary Clinton, Bernie Sanders and Martin O'Malley? They're "villains," according to American Energy Alliance.

9. Salon's Simon Maloy called the GOP's (particularly Cruz and Rubio) rejection of climate science a radical departure from what is now seen as the more moderate stances of Ronald Reagan and George H.W. Bush, thanks to classified memos from each of their administrations obtained on Thursday by The Washington Post.

The evidence of a crisis is literally everywhere, so not seeing it requires a huge degree of willful blindness. This obstinate, ideology-driven refusal to even recognize that anthropogenic climate change is happening is one of the more powerful indicators of just how radicalized the Republican Party has become over the last 25 years. The GOP’s denialism on climate change is a rebuke of scientific evidence, global consensus and the Republican Party as it existed before the crazy people took over.

10. In an op-ed for The New York Times, Frank Bruni said, "anyone but Ted Cruz" would be a better candidate for the presidency. He compared picking a presidential candidate to hiring someone to work for you. He asked, would you hire someone even though everyone who has worked with him "loathes him." Citing several examples, he argued that's the case with Cruz. "He’s the antithesis of a team player. His thirst for the spotlight is unquenchable. His arrogance is unalloyed," said Bruni. "He actually takes pride in being abrasive, as if a person’s tally of detractors measures his fearlessness, not his obnoxiousness."

Several of his own party members despise him. George W. Bush, who Cruz worked for on his 2000 campaign, recently told Republican donors, "I just don't like the guy." Those sentiments could be chalked up to politicking, but even his former classmates at both Princeton and Harvard don't like him, saying he was "arrogant," "strident" and "creepy." One went so far as to say that the thought of him becoming President was "horrifying." His freshman roommate, Craig Mazin, couldn't stand him. “I would rather have anybody else be the president of the United States. Anyone. I would rather pick somebody from the phone book,” Mazin told The Daily Beast.

"I did not like him at all in college ... And you know, I want to be clear, because Ted Cruz is a nightmare of a human being," Mazin said in an interview. "I have plenty of problems with his politics, but truthfully his personality is so awful that 99 percent of why I hate him is just his personality. If he agreed with me on every issue, I would hate him only one percent less."

11. On Thursday night, Trevor Noah, host of The Daily Show, lambasted "the Republican party's new it-girl" (aka Ted Cruz) for being a "radical conservative, budget-slashing, anti-immigrant, climate denier." He called Cruz an "asshole" for his response to the mass shooting in San Bernardino, California earlier this week and showed a clip from an MSNBC commentator saying, "he's probably one of the most hated people in the Senate. Both Democrats and Republicans do not like this guy."

The Daily Show with Trevor Noah