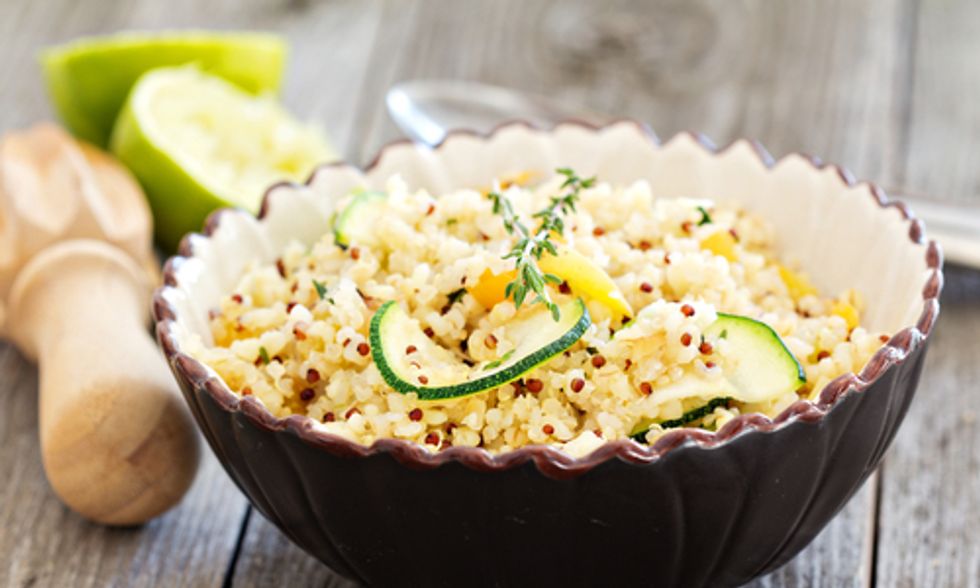 Quinoa is the world's most popular “superfood."

It is loaded with protein, fiber and minerals, but doesn't contain any gluten.

Quinoa is a grain crop that is grown for its edible seeds. It is pronounced KEEN-wah.

It technically isn't a cereal grain, but a pseudo-cereal. In other words, it is basically a “seed" which is prepared and eaten similarly to a grain.

Quinoa was an important crop for the Inca Empire. They referred to it as the “mother of all grains" and believed it to be sacred. It has been consumed for thousands of years in South America, although it only became trendy and reached “superfood status" a few years ago.

These days, you can find Quinoa and products made with it all over the world, especially in health food stores and restaurants that emphasize natural foods.

There are three main types of quinoa: white, red and black.

Here is the nutrient breakdown for one cup of cooked quinoa, or 185 grams:

This is coming with a total of 222 calories, with 39 grams of carbs and four grams of fat. It also contains a small amount of Omega-3 fatty acids.

Quinoa is non-GMO, gluten free and usually grown organically. Even though not technically a grain, it still counts as a “whole grain" food.

NASA scientists have been looking at it as a suitable crop to be grown in outer space, mostly based on its high nutrient content, ease of use and how easy it is to grow.

The year 2013 was actually called “The International Year of Quinoa" by the United Nations (UN), based on its high nutrient value and potential to contribute to food security worldwide.

Bottom Line: Quinoa is an edible seed that has become very trendy among health conscious people. It is loaded with many important nutrients.

The health effects of real foods go way beyond the vitamins and minerals we're all familiar with. There are thousands of trace nutrients in there, and some of them are extremely healthy.

This includes interesting molecules called flavonoids, which are plant antioxidants that have been shown to have all sorts of beneficial effects on health. Two flavonoids that have been particularly well studied are quercetin and kaempferol, and they happen to be found in large amounts in quinoa. In fact, the quercetin content of quinoa is even higher than typical high-quercetin foods like cranberries.

These important molecules have been shown to have anti-inflammatory, anti-viral, anti-cancer and anti-depressant effects—at least in animal studies.

By including quinoa in your diet, you will significantly increase your total intake of these (and other) important nutrients.

3. It Is Very High in Fiber, Much Higher Than Most Grains

Another important benefit of quinoa is that it is high in fiber.

One study that looked at four varieties of quinoa found a range of between 10 and 16 grams of fiber, per every 100 grams of uncooked quinoa. This equals 17-27 grams per cup, which is very high, more than twice as high as most grains. Boiled quinoa contains much less fiber, gram for gram, because it absorbs so much water.

Unfortunately, most of the fiber is insoluble fiber, which doesn't appear to have the same health benefits as soluble fiber. That being said, the soluble fiber content is about 2.5 grams per cup (or 1.5 grams per 100 grams), which is still decent.

Bottom Line: Quinoa is much higher in fiber than most grains, with one source finding 17-27 grams of fiber per cup of uncooked quinoa.

4. Quinoa Is Gluten Free and Perfect for People With Gluten Intolerance

According to a 2013 survey, about a third of people in the U.S. are currently trying to minimize or avoid gluten. A gluten-free diet can be healthy, as long as it is based on foods that are naturally gluten free. The problems arise when people eat “gluten free" foods made with refined starches instead. These foods are no better than their gluten-containing counterparts, because gluten free junk food is still junk food.

Well, many researchers have been looking at quinoa as a suitable ingredient in a gluten-free diet, for people who don't want to give up staples like breads and pasta.

Studies have shown that by using quinoa instead of typical gluten-free ingredients like refined tapioca, potato, corn and rice flour, it can dramatically increase the nutrient and antioxidant value of the diet.

Bottom Line: Quinoa is naturally free of gluten and using it instead of typical gluten-free ingredients can increase the antioxidant and nutrient value of a gluten-free diet.

5. Quinoa Is Very High in Protein, With All The Essential Amino Acids That We Need

Protein is made out of amino acids. Some of them are termed “essential" because we can not produce them and need to get them from the diet.

However, quinoa is an exception to this, being particularly high in in all the essential amino acids. For this reason, quinoa is an excellent source of protein. It has both more and better protein than most grains.

With eight grams of quality protein per cup of cooked quinoa (or 4.5 grams per 100 grams), quinoa is an excellent plant-based protein source for vegetarians and vegans.

Bottom Line: Quinoa is high in protein compared to most plant foods and contains all the essential amino acids that we need.

6. Quinoa Has a Low Glycemic Index

The glycemic index is a measure of how quickly foods raise blood sugar levels.

It is known that eating foods that are high on the glycemic index can stimulate hunger and contribute to obesity. Such foods have also been linked to many of the chronic, Western diseases that are so common today, like diabetes and heart disease.

Quinoa has a glycemic index of 53, which is considered low. However, it's important to keep in mind that quinoa is still pretty high in carbs, so it is not a good choice for a low-carb diet, at least not in large amounts.

Bottom Line: The glycemic index of quinoa is around 53, which is considered low. However, it is still relatively high in carbohydrates.

7. It Is High in Minerals That Most People Don't Get Enough of, Especially Magnesium

There are many nutrients in the modern diet that people tend to be lacking in. This is particularly true of some minerals, especially magnesium, potassium, zinc and (for women) iron.

Interestingly, quinoa is very high in all four minerals. It is particularly high in magnesium, with one cup having about 30 percent of the RDA.

The problem is that quinoa contains a substance called phytic acid, which can bind these minerals and reduce their absorption. However, by soaking and/or sprouting the quinoa before cooking it, you can reduce the phytic acid content and make these minerals more bioavailable.

Quinoa is also pretty high in oxalates, which reduce the absorption of calcium and can cause problems for certain individuals with recurring kidney stones.

Bottom Line: Quinoa is very high in minerals, but the phytic acid can partly prevent them from being absorbed. Soaking or sprouting quinoa degrades most of the phytic acid.

8. Quinoa May Have Some Major Benefits for Metabolic Health

Given the high amount of beneficial nutrients, it makes sense that quinoa could lead to improvements in metabolic health.

Although this needs to be studied more thoroughly, I did find two studies (one in humans, the other in rats) that examined the effects of quinoa on metabolic health. The human study found that using quinoa instead of typical gluten-free breads and pastas significantly reduced blood sugar, insulin and triglyceride levels. The rat study found that adding quinoa to a diet high in fructose almost completely inhibited the negative effects of fructose.

Bottom Line: Two studies, one in humans and the other in rats, show that quinoa can improve metabolic health. This includes lower blood sugar and triglyceride levels.

9. Quinoa Is Loaded With Antioxidants

Quinoa also happens to be very high in antioxidants. Antioxidants are substances that neutralize free radicals and are believed to help fight aging and many diseases.

One study looked at antioxidants in 10 foods: five cereals, three pseudocereals and two legumes. Quinoa had the highest antioxidant content of all 10.

Allowing quinoa seeds to sprout seems to increase the antioxidant content even further.

Bottom Line: Quinoa appears to be very high in antioxidants, which are increased even further after the seeds are sprouted.

10. Quinoa Has Several Important Characteristics That Make It a Weight Loss Friendly Food

In order to lose weight, we need to take in fewer calories than we burn. It is known that certain properties of foods can facilitate this process, either by boosting metabolism (increasing calories out) or reducing appetite (lowering calories in). Interestingly, quinoa has several such properties.

It is high in protein, which can both increase metabolism and reduce appetite significantly.

The high amount of fiber should also help to increase feelings of fullness, making us eat fewer calories overall.

The fact that quinoa has a low glycemic index is another important feature, but choosing such foods has been linked to reduced calorie intake.

Although there is currently no study that looks at the effects of quinoa on body weight, it seems intuitive that it could be a useful part of a healthy weight loss diet.

Bottom Line: Quinoa is high in fiber, protein and has a low glycemic index. These properties have all been linked to weight loss and improved health.

11. Quinoa Is Easy to Incorporate Into Your Diet

The last point is not a health benefit, but still incredibly important. It is the fact that quinoa is very easy to incorporate into your diet. It is also tasty and goes well with many foods.

Depending on the type of quinoa, it can be important to rinse it with water in order to get rid of saponins, which are found on the outer layer and can have a bitter flavor. However, some brands have already been rinsed, so this may not be necessary.

You can buy quinoa in most health food stores and many supermarkets. It is also available on Amazon, with many reviews, testimonials and usage tips from real customers.

Quinoa can be ready to eat in as little as 15-20 minutes:

It should now have absorbed most of the water and gotten a fluffy look. If done right, it should have a mild, nutty flavour and a satisfying crunch.

Then there are dozens of other delicious ways to use quinoa.

For more details, you can read these in-depth instructions on How to Cook Fluffy, Tasty Quinoa or check out these 27 Delicious Quinoa Recipes.

8 Ways Tomatoes Are an Anti-Aging Superfood