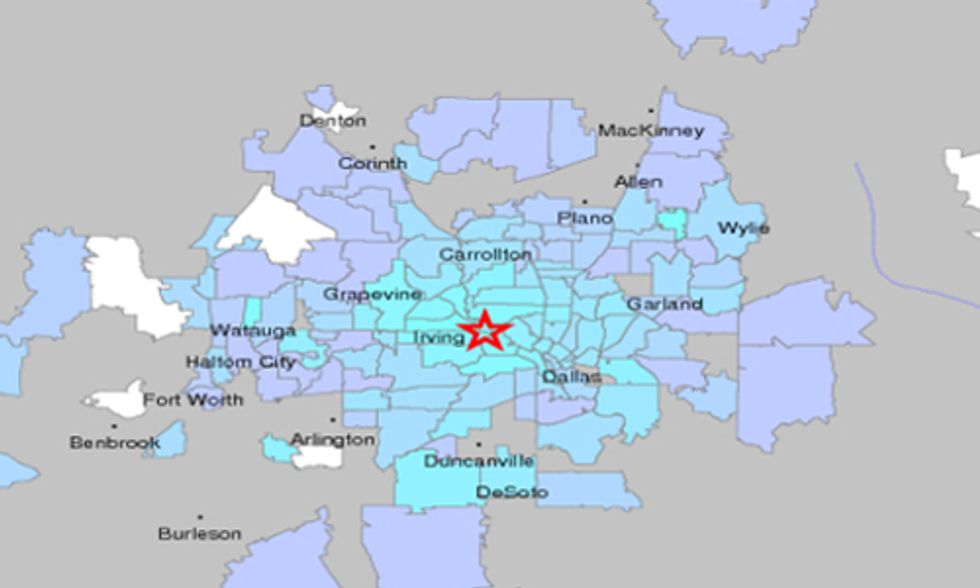 This Tuesday a study was released showing that a series of earthquakes outside Youngstown, Ohio, including one strong enough to be felt by area residents, were caused by the fracking operations that have blossomed in the area in the last few years.

Now the eyes are on Texas. In 24 hours Tuesday and Wednesday, the area of Irving, between Dallas and Fort Worth, was hit with a cluster of 11 earthquakes, ranging in magnitude from 1.7 to 3.6. Several of the quakes were felt throughout the metropolitan area, with Irving's emergency operations center receiving hundreds of calls. The Dallas Morning News blog tracked the quakes as they were happening.

Earthquakes, once rare in the area, have been increasing in frequency, with more than 20 since last September, according to StateImpact Texas, a project of two Texas public radio stations. And with Irving sitting on top of the natural gas-rich and heavily fracked Barnett shale deposit as well as the Balcones Fault Zone, many residents and researchers are think it's to blame here too, just as in Ohio.

"The upsurge in quakes started in Texas around the time the oil and gas boom took hold several years ago," reported StateImpact Texas. "Residents in many parts of the state blame the them on wastewater disposal wells, where fluid byproducts of oil and gas drilling are pumped deep into the ground.  Scientists have shown how injecting fluid into the ground can cause earthquakes."

Earlier this year, it reported on nine studies linking drilling and earthquakes in Texas, noting, "The number of recorded earthquakes (most larger than 3.0) has increased tenfold since a drilling boom began several years ago. The Lone Star State is now one of the shakiest in the country, coming in sixth in the continuous U.S. for having larger quakes last year."

“It’s premature to speculate on the cause of this current series of seismic events,” said Brian Stump, Albritton Chair of Geological Sciences at Dallas' Southern Methodist University (SMU), in a statement reported in the Dallas Morning News yesterday. “We’re just getting started. We want to support the local community in understanding these earthquakes, and the team appreciates the cooperation of the city of Irving, the United States Geological Survey (USGS) and IRIS [the U.S. Environmental Protection Agency's Integrated Risk Information System] in helping us get the best information possible.”

SMU studies of three earlier clusters of quakes in the Dallas-Fort Worth area since 2008 cited wastewater injection wells as a "plausible cause" of those clusters. The USGS said in its report on the Irving quake cluster, "There is evidence that some central and eastern North America earthquakes have been triggered or caused by human activities that have altered the stress conditions in earth's crust sufficiently to induce faulting. Activities that have induced felt earthquakes in some geologic environments have included impoundment of water behind dams, injection of fluid into the earth's crust, extraction of fluid or gas, and removal of rock in mining or quarrying operations."

The Daily Beast also pointed out, "This cluster of quakes is taking place almost directly beneath the Exxon-Mobile world headquarters, which is located in Irving. The company’s CEO, Rex Tillerson, joined a lawsuit last year to prevent a water tower used in the fracking process from being built near his 83-acre horse ranch in a swanky suburban Dallas enclave."