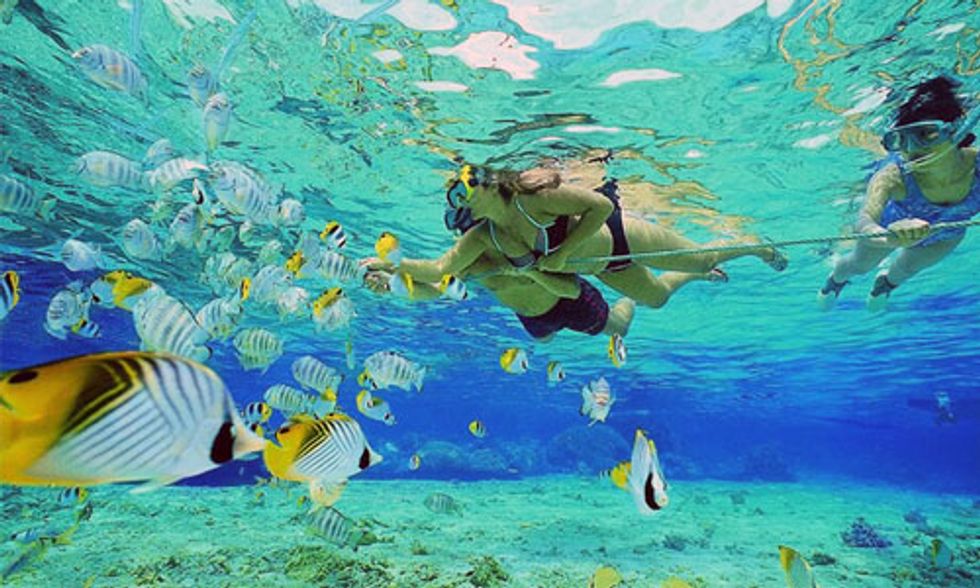 For ocean lovers, there's almost nothing more exciting than snorkeling and exploring underwater worlds. Most of the time that's done in tropical places with vibrant coral reefs and colorful fish swimming around. Some of the places on this list are, in fact, exactly that, but there's also a few that might surprise you.

Wisconsin usually isn't associated with snorkeling, but Lake Michigan has some beautiful spots to explore. Bailey's Harbor is two hours north of Green Bay on Wisconsin's finger that sticks into the lake. Lakeshore Adventures offers a shipwreck snorkeling trip as well as multiple diving trips. On the snorkeling trip, adventures can explore several shipwrecks dating back to the 1800s. Local experts say there are hundreds of shipwrecks in the area.

Block Island is a 45-minute ferry ride south from mainland Rhode Island. It is often called the "Bermuda of the north." The water surrounding the island has abundant reefs, making it one of the best places to snorkel in the northeast, according to The Clymb. The reefs shelter fish and the continental shelf is short, ensuring snorkelers will have good visibility and will see more than just sand. But go in the height of summer. The water temperatures at Block Island are cold, even in the summer, and would be unbearable any other time of the year.

Santa Catalina Island is roughly 26 miles off the coast of Long Beach, California. The island offers some of the best snorkeling in the world, according to dive shop Snorkeling Catalina. Visitors can take guided, night or boat snorkeling tours with the dive shop. Two popular snorkeling and diving locations near the island are Lover's Cove and Casino Point marine preserves, according to Catalina Scuba Luv. In both locations you'll see abundant fish and beautiful underwater habitats.

Crystal River is on Florida's gulf coast, about two hours west of Orlando. The biggest attraction in Crystal River is swimming with manatees. Crystal River is home to the world's largest population of manatees during the winter season. The population shrinks during the summer season. River Adventures offers a 3-hour manatee tour. With the correct guidance, visitors can interact with the manatees in their natural habitat. Birds, fish and other wildlife can be viewed on the boat ride to and from the manatee spot.

Illinois is an unusual state to associate with snorkeling, but Haigh Quarry in the town of Kankakee, about an hour and a half southwest of Chicago, has hosted divers and snorkelers of all sorts. In the 1960s, Haigh Quarry was a limestone mine that supplied stones for foundations and bases of highways. The quarry stopped being used in the early 1970s and stood abandoned for several years. Jim Haigh bought the land in 1978 and decided to unplug some pumps the mining company had left. Within three years the quarry was filled with spring-fed water. The first dive shop was brought in in 1992.

No matter where you go in Florida, chances are you will be near a good snorkeling location. But one of the must-see snorkeling locations is John Pennekamp Coral Reef State Park in Key Largo. The state park was established in 1963 to protect part of the only living coral reef in the continental U.S. The coral formations and marine life are what draw visitors to the park from around the world.

Seventy miles west of Key West sits Dry Tortugas National Park, a 100 square mile park that consists mostly of open water with a few small islands. The park has world-renowned clear waters and coral reefs. The park's dive sites provide a chance to explore both seagrass and coral habitats. There are eight spots that both snorkelers and divers can enjoy.

Ever dreamt about swimming with sharks? At La Jolla Shores, a neighborhood in San Diego, your dream could come true. La Jolla's main attraction are the leopard sharks that migrate to the area from May through October. Many of the sharks are pregnant females moving to the warm, shallow water to speed up incubation of their young. San Diego Expeditions claims snorkelers will see dozens of leopard sharks on their trip. Snorkelers will also have the chance to see multiple ray species and bottom feeder fish.

Marathon, one of the islands in the Florida Keys, has multiple dive locations to see the wildlife. Captain Pip's Marina and Hideaway offers trips to two locations off the island: Sombrero Key Sanctuary Preservation Area and Lighthouse and Private's Cove. Sombrero Reef is the third largest barrier reef in the world boasting a 30-acre coral reef that ranges in depth from 2 to 30 feet. On rough weather days, Private's Cove with shallow water is the better choice. At the cove snorkelers will be able to see fish, plant life, lobsters and sea horses.

New London, under an hour up the coast from Newport, is home to Ocean Beach. New England Science and Sailing, a nonprofit ocean adventure program, offers combined kayak and snorkeling tours of Ocean Beach and the surrounding area. While you may not spot tropical fish and corals here, the underwater environment is still rich with critters and will capture any marine enthusiast's attention.

Yet another awesome snorkeling site in Florida. Peanut Island is located at the mouth of the Lake Worth inlet, Visit Palm Beach explains. Its shallow and clear waters are perfect for snorkelers to explore the area. On snorkeling tours, visitors kayak out to the island from Riviera Beach. As they paddle, kayakers can take in the skyline of Palm Beach. Once on the island, they can swim, snorkel or just relax. There are brick pathways encircling the island for visitors who want to hike.