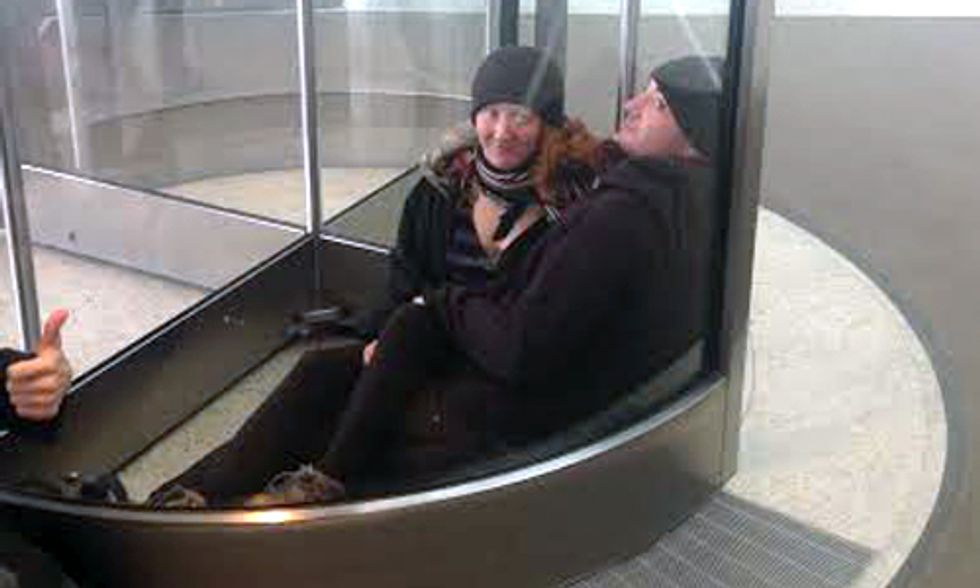 On Friday, two activists with Great Plains Tar Sands Resistance and Cross Timbers Earth First! locked themselves inside a revolving door at the Devon Tower in Oklahoma City, OK in protest of Devon’s involvement in tar sands extraction and plans to increase fracking in Eagle Ford Shale.

Simultaneously, a banner displaying a Mockingjay from the popular Hunger Games series was unfurled from the second story, reading: “The Odds are Never in Our Favor.” Imagery from the Hunger Games was employed to highlight the parallel between industrial sacrifice zones in real life, and the resource colonies (districts) that are subjected to state and economic violence in the series. This action coincides with two days of trial for folks in the Mi’kmaq Warrior Society who were arrested while preventing natural gas exploration on their traditional lands.

“I’m opposed to the industry’s blatant disregard for human wellbeing in the pursuit of profit,” said Cory Mathis of Austin, TX, one of the activists locked down inside Devon. “These industries poison countless communities, often deceive and coerce folks into signing contracts, and when that doesn’t work, they use eminent domain to steal the land."

"Texas and Oklahoma have long been considered sacrifice zones for the oil and gas industry, and people have for the most part learned to roll over and accept the sicknesses and health issues that come with the temporary and unsustainable boost in employment,” Mathis continued.

In 2010, Devon Energy's Jackfish 1 facility on Beaver Lake Cree First Nations territory in Alberata, Canada experienced a failure at one of the wellheads. The failure sent a plume of bitumen-laced, high-temperature steam into the air for nearly 36 hours. Long seen as a responsible and benevolent corporate community member, Devon Energy is a key player in the deadly tar sands industry. And though Devon Energy has been touted as practicing the safest and greenest form of tar sands extraction, the form of extraction that Devon practices, steam assisted gravity drainage, emits 2.5 times the greenhouse emissions as open mining according to the Pembina Institute.

Additionally, since 80 percent of tar sands reserves lie too deep within the Earth to mine, this type of extraction will utilize 30 times more land area than open mining.

“I’m here to try to bring to light the damage being done by tar sands extraction and fracking," said Caroline McNally, the other activist locked down. "These companies have been deliberately hiding and suppressing information from the general public, all-the-while building their public image of being charitable and creating jobs."

"It’s the same story all the way from the Athabasca tar sands to the Gulf—we hear the ridiculous proposition that a company that routinely profits off of poisoning folks is somehow capable of being ‘philanthropic’,” McNally concluded.

CEO Jim Richels sits on the board of TransCanada, developers of the Keystone XL pipeline.