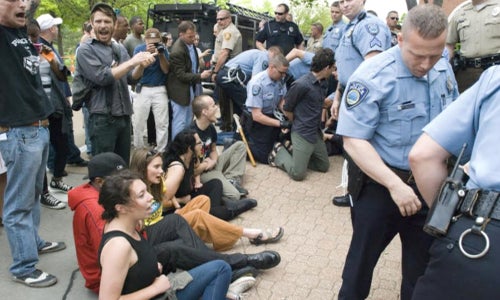 For the second time in less than a week, activists were arrested at a Peabody Coal demonstration in Missouri yesterday. Seventy-five people rallied at Peabody’s annual shareholder meeting at the Ritz Carlton in Clayton, MO. Members of the local Take Back St. Louis campaign were joined by Dineh (Navajo) Peabody resist-ers from Black Mesa and residents from Rocky Branch, IL, who are currently fighting Peabody’s mine expansion there. 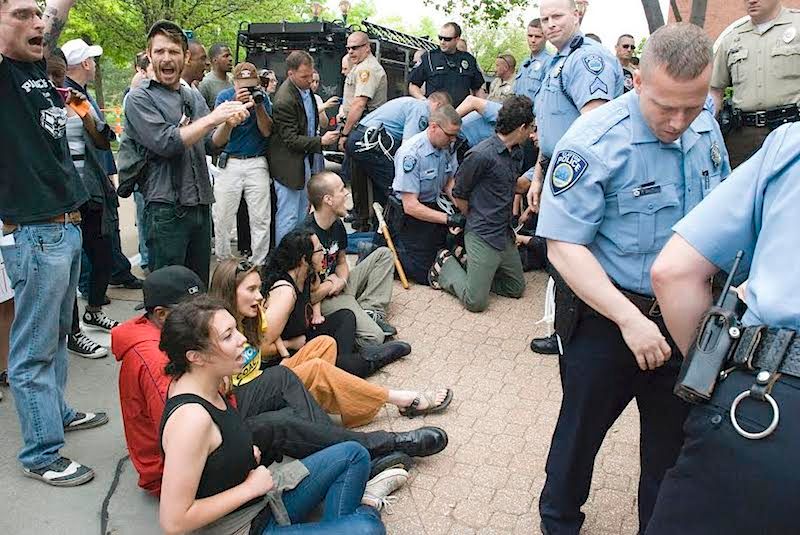 Representatives from Take Back St. Louis, Justice for Rocky Branch and Tonizhoni Ani had bought shares of Peabody in order to attend the shareholder meeting and voice their concerns to CEO Greg Boyce, but were not allowed into the main meeting room with Peabody executives.

When they were placed in an “overflow room,” they walked out of the meeting. The entire rally then marched to the entrance of the Ritz Carlton to deliver a letter outlining the group’s demands to Boyce. Eight people were arrested while trying to enter the Ritz Carlton to deliver the letter. Two other people were arrested attempting to enter the shareholder meeting from the overflow room.

Yesterday’s protest comes less than a week after Wash U Students Against Peabody’s 17 day sit-in ended when seven students were arrested trying to enter their Board of Trustees meeting to encourage Peabody CEO (Boyce) to resign from the university’s Board of Trustees.

“I am here today to continue to spread the message that the Wash U Students Against Peabody started spreading with their actions over the past weeks,“ said Marshall Johnson, Black Mesa Resident and member of Tonizhoni Ani. “We need to stand up to Peabody on Black Mesa and here in St. Louis so our children and grandchildren and all future generations can have clean water and clean air. I am grateful to Wash U students for standing up for a respectful future for us all.”

Check out the slideshow below of the Wash U students being arrested last Friday:

Recently, Peabody has been engaging in unprecedented attempts to undermine St. Louis’ local democracy. In late March, Peabody sued to keep the citizen-driven Take Back St. Louis initiative off the ballot and away from voters. The ballot initiative would have stopped the city’s policy of giving Peabody and other big corporations large tax breaks.

Now, in the past few days, Peabody’s lobbyists and Mayor Slay’s (D-St. Louis) lobbyists have inserted amendments into Missouri Senate Bill 672 that would ban the city of St. Louis from “by ballot measure impos[ing] any restriction on any public financial incentive authorized by statute.” The amendment is a blow to local control, stripping the city of the ability to determine its own tax regulation.

“The ballot initiative process exists so that we as city residents can bring our concerns to our government and other city residents,” said Joretta Wilson, member of the Take Back St. Louis campaign. “Peabody Coal and Mayor Slay are blatantly attempting to subvert our local democratic process.”

“We collected 22,000 signatures to put the Take Back St. Louis ballot initiative on the ballot, and now Peabody and Slay’s lobbyists are trying to make the initiative illegal before St. Louis residents even get a chance to vote on the initiative,” Wilson explained.

Yesterday’s demonstration united the local Take Back St. Louis campaign with communities fighting Peabody across the nation, including Dineh (Navajo) resistors from Big Mountain/Black Mesa in Arizona, and the Justice for Rocky Branch campaign in southern Illinois. For decades, these communities have lived with Peabody using its financial power to influence democracy and ensure continued profits without concern for human lives, homes and futures.

“I am here today to ask Mr. Boyce why our homes and our land are being destroyed for Peabody’s bottom line, “ said Judy Kellen, one of the Rocky Branch residents who tried to enter today’s shareholder meeting. “Peabody is making profits at the expense of our future and the health of future generations.”

This year marks the fortieth year of Indigenous resistance by the Diné (Navajo) communities of Big Mountain and Black Mesa, AZ, to forced relocation from ancestral homelands due to Peabody Coal’s massive strip mining. The effects of the relocation meet all the criteria of the United Nations’ internationally recognized definition of cultural genocide.

Diné (Navajo) resistors on Black Mesa are planning a one-week training camp starting May 16 to demand “not one more relocation” of Indigenous people by Peabody. Members of the Take Back St. Louis campaign will be traveling to Black Mesa for the camp, continuing the increased unity amongst groups fighting Peabody across the country.