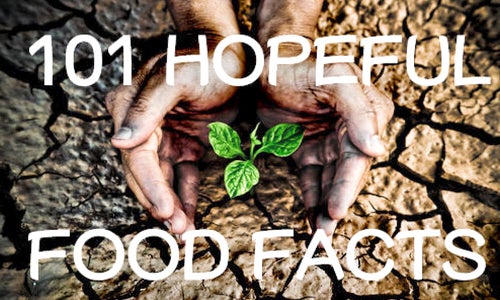 This week, Food Tank is highlighting stories of hope, innovation and success, in creating a better food system. From women’s land access in Chad and urban green spaces in Australia to chefs in the United Kingdom and the U.S. implementing local, sustainable food sourcing—there are hundreds of innovations giving us hope about the future of food. 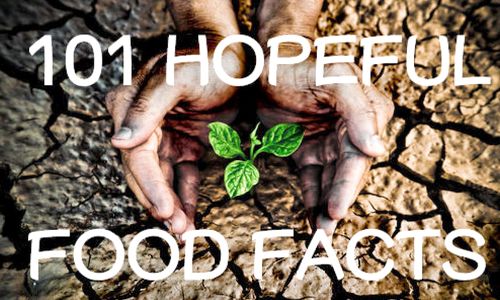 1. Biologist Roger Leakey’s book, Tree of Life, highlights the ability of trees to help feed the planet. Through agroforestry—growing trees along with crops—communities can increase crop productivity and overcome global hunger and poverty, contributing to the livelihoods of more than 1.6 billion people.

3-5. Chefs like Jose Andres, Barton Seaver and Dan Barber are making headlines for their innovative visions of sustainable food production:

Seaver has evolved from a seven-time restaurateur to an emerging explorer for National Geographic. His restaurant, Hook, was named one of the top eco-friendly restaurants in America for their sustainable fishing practices, by Bon Appetit. Seaver is also the co-author of Foods for Health, which will be released in September.

An executive chef, Barber is the co-owner of Blue Hill and Blue Hill at Stone Barns, and the author of his forthcoming book, The Third Plate, written to inspire Americans to think sustainably about food and agriculture.

6. The EAT Forum, held in Stockholm this year, brought together leading scientists, business leaders, and political minds through a series of lectures and information sharing.

7. The James Beard Food Conference aims to break down the silos that exist among public health practitioners, foodies, farmers and chefs in New York City, Oct. 27-28, 2014.

8. According to the U.N. Food and Agriculture Organization (FAO), raised bed “keyhole” gardens improve the nutrition of at risk communities in AIDS/HIV affected regions of Africa. These vegetable beds use compost and recycled waste water to grow crops, even in dry months.

9. The World Food Program’s School Meals program works across the globe to provide meals to 18.6 million children, often in the hardest-to-reach areas.

11. Over the last decade, the area of organic farmland in the European Union increased by 500,000 hectares each year.

12. Women make up 24 percent of organic farm managers in the European Union and 41 percent in Latvia.

13. According to Olivier Schutter, U.N. Special Rapporteur on the Right to Food from 2008 to 2014, most international agencies such as the World Bank and the U.N. Food and Agriculture Organization, now “acknowledge the necessity for each country to ensure its food production and to invest in local food systems.”

14. In 2013, French Minister for Food and Agriculture, Stéphane Le Foll, announced he wanted France to be a leader in agroecology. He hopes half of all French farms will adopt agroecological methods by 2025.

15. In December 2013, the European Union banned neonicotinoid pesticides for two years. Neonicotinoids are a class of pesticides that are suspected to kill bees in large numbers.

16. The U.N. Food and Agriculture Organization proclaimed 2014 the International Year of Family Farming. There are 500 million smallholder farms worldwide and more than two billion people in the world depend on them for their livelihoods.

17. The expansion of urban agriculture projects and initiatives like Incredible Edible in the United Kingdom, Growing Power in Milwaukee and Chicago, and Sydney Green Square in Australia, show the growth of vibrant and sustainable urban environments.

20. Eaters are becoming more active in the link from farm to fork. LocalHarvest lists more than 30,000 family farms and farmers markets, along with restaurants and grocery stores that feature local food.

21. More and more young people in the U.S. are deciding to become farmers. John Agostinho’s path to farming full-time took him from a technological career in New York City to an ever-growing flock of sheep in the Hudson Valley.

22. In October 2013, 83 non-governmental and international organizations joined the Global Open Data for Agriculture and Nutrition initiative, which “seeks to make agricultural and nutritional data available, accessible and usable for unrestricted use worldwide.”

23. An increasing number of participatory online tools such as, Fruitmap and PlantCatching, are making it easier for people to access fresh, locally grown food in their communities.

24. Permaculture, along with other agroecological techniques, have the potential to reverse the process of desertification in extremely dry areas.