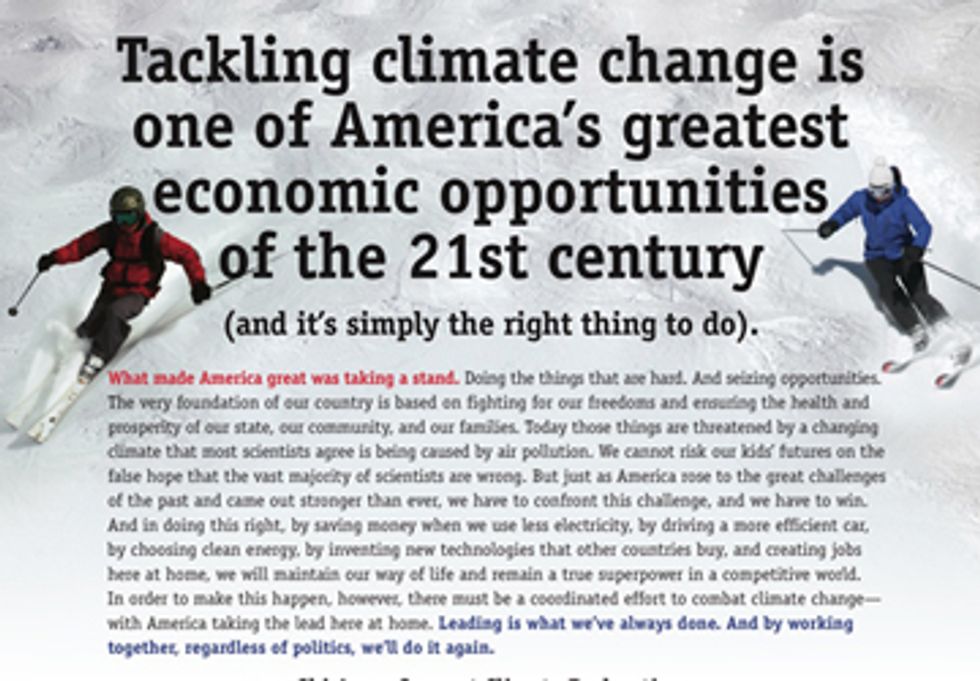 Today, 108 ski areas from around the U.S. joined with 40 other businesses, Ceres and its Business for Innovative Climate and Energy Policy (BICEP) project in signing the Climate Declaration, which calls upon federal policymakers to seize the American economic opportunity of addressing climate change.

These ski areas join iconic American businesses, including General Motors Co., Nike and Levi Strauss & Co., as well as founding signatory Aspen Snowmass, in asserting that a bold response to the climate challenge is “one of America’s greatest economic opportunities of the 21st century.”

“It is obvious that the success of ski business operations depends greatly on climate, which is why we are so invested in programs that keep our slopes sustainable. But our actions alone won’t be enough without strong policies,” said Brent Giles, chief sustainability officer for Powdr Corp of Utah, parent company to Park City Mountain Resort in Utah, Copper Mountain in Colorado and Killington Resort in Vermont. “We welcome legislative and regulatory initiatives that will reduce carbon emissions, incentivize renewable energy development and help improve our resiliency in the future.”

Ski areas in the U.S. employ approximately 160,000 people and generate approximately $12.2 billion in annual revenue. The National Ski Areas Association (NSAA) calculates that visitors to U.S. ski areas spent $5.8 billion at those resorts over the course of the 2011-2012 season. Preliminary figures from the 2012-2013 season show an 11 percent increase in visits year-over-year, to an estimated 56.6 million visits this season.

“The past ski season was a banner year for our guests and for our resort, but we can’t gamble on the weather in an uncertain climate. We have to take action,” said Jerry Blann, president of Jackson Hole Mountain Resort in Wyoming. “Resorts have made tremendous efforts to raise awareness on the issue of climate change and to adjust our operations to reduce carbon emissions and manage resources efficiently. We need Washington to take those strategies seriously through stronger policies.”

“Ski area environmental programs have come a long way in 20 years, particularly in terms of their level of sophistication, demonstrated results and their concerted focus on addressing climate change,” says Geraldine Link, NSAA public policy director. “Signing the Climate Declaration is the next logical step for our members to get solutions to scale.”

“We welcome the ski industry as allies in our work on climate and energy issues and as signatories of the Climate Declaration. This is an industry that cannot be off-shored, and they are calling for climate action here at home,” said Anne Kelly, director of BICEP. “Policymakers must realize that the old political paradigm of ‘It’s the environment or the economy; pick one’ is a false choice. American businesses are ready to combat climate change, and policymakers should join them in leading the way.”

Over the course of an ongoing campaign organized by Ceres and BICEP, other leading businesses, as well as individuals, are encouraged to sign the declaration.